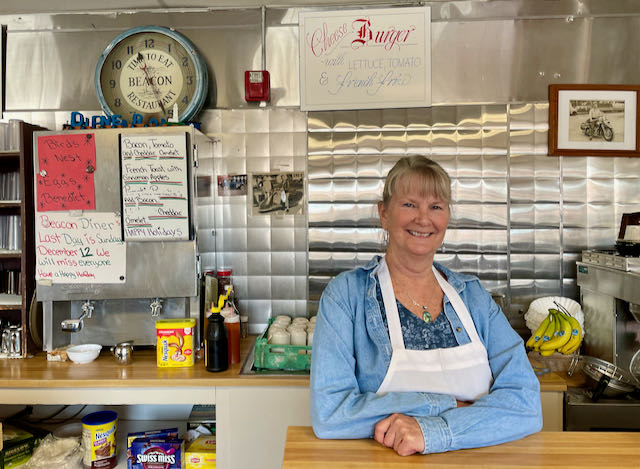 Judy Harris is hanging up her apron after running the Beacon Diner for more than 25 years and being a part of the South County Trail landmark for most of her life. Harris is a daughter of Vern Knott, who bought the place in 1967. The family lived in the Sun Valley neighborhood of East Greenwich behind the diner. It’s always been a family affair. 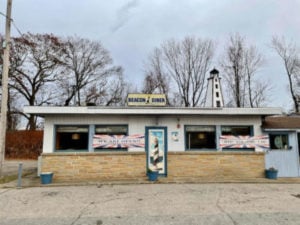 But Harris’s three children have taken other career paths, so when someone approached her recently about buying the place she decided it was time.

“We’ve had our ups and downs – we’ve gone through it all,” said Harris Thursday after the morning rush. “We made two movies here. First one was Wesley Snipes and Cybill Shepard,  ‘Hard Luck’ – it was awful,” she said. The second one was the more successful “27 Dresses,” with Katherine Heigl. “That was a lot of fun,” she said. Amateur filmmakers have used the space too over the years.

The diner had another moment in the sun when it was featured in Yankee Magazine back in the 1970s.

Those were busier times for South County Trail, a main road to … South County, before Route 4 opened in the 1980s. The restaurant was open from 6 a.m. to 7 p.m. initially. For a couple years, it stayed open into the wee hours, to catch the “bar crowd,” as Harris called it. But that was fleeting. Breakfast and lunch have been the mainstay meals for years now. 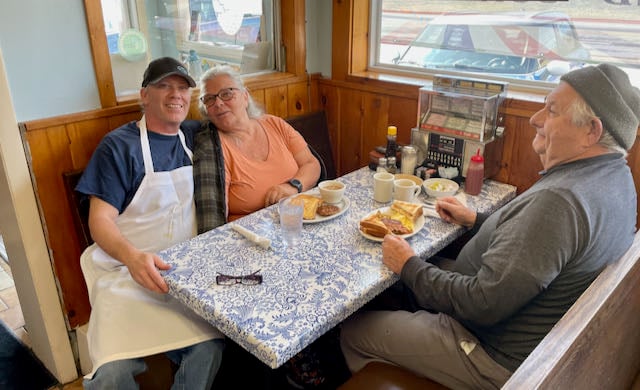 Dennis Moore takes a moment out of the kitchen to pose with longtime Beacon Diner customers Kathy and Charles Eldred. “This was my first job,” says Kathy.

Harris met her husband at the Beacon. One time, when Harris was in her 20s, she needed to move and the man who would become her husband had a big pickup. The rest was 40 years of marriage and three kids. She’s a widow now, with grandkids in distant states, another reason to sell the business.

Jessica Harris, the middle Harris child, came in from San Diego just to help out in the final days. She was the least involved of the Harris children, she said, having last worked there when she was 10 years old. Daughter Sarah lives in Colorado. Harris’s son, Kyle, is still in Rhode Island and works for an automotive company but he’ll be on hand Sunday, for the final day.

Jeannie Tart of Warwick has been waiting tables at the diner for the past 13 years. As one customer left Thursday he asked her for “one last hug,” before he slipped out the door. She gave it. Tart said she’d enjoyed the work but she had plans, including time spent down south, and she wasn’t unhappy to be able to celebrate Christmas without a job calling in the background.

Harris said her father – who at age 91 is shrimping in Florida, where he lives – wishes she could keep running the Beacon into her 80s. “He retired when he was 65!” she said, shaking her head. “Know how many vacations he took during that first year of retirement?” Harris held up 5 fingers.

But then she said, “I’ve gotten to travel a lot. I’ve been very lucky – I have a really good crew.”

What’s the hardest part of closing the Beacon Diner? “I’m going to miss the customers,” she said, “visiting with them and finding out what their day-to-day lives are.”

Best of luck, Judy. Thanks for the memories.