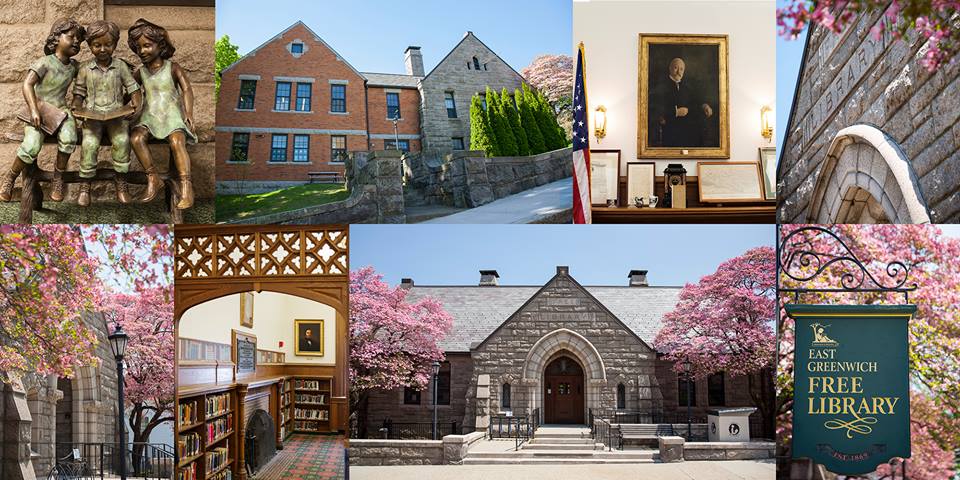 The EG Free Library’s 100th Anniversary committee has been a regular at this year’s Main Street Strolls.

The East Greenwich Free Library building was dedicated June 29, 1915, nearly 100 years ago and the celebration has begun. At the same time, the library has applied for a grant to renovate the exterior, adding open-air “rooms” to the venerable space.

In June 1915, Daniel Albert Peirce donated the land, money for construction, and books for the library. He then set up an endowment to run the library.

Local historian Alan Clarke has written about Peirce, noting that there’s not much known about the man beyond what was written about him in his obituary. A banker, he was born in East Greenwich and lived to age 95.

Clarke wrote a column about Peirce titled “Who Is Daniel Albert Peirce?” and that question’s become the rallying cry of sorts for the 100th Anniversary organizers. You can read that column on the library’s website here.

The committee’s been meeting monthly to plan events and has been raising money through t-shirt sales. The shirts are emblazoned with “02818” on them and are available at the library as well as at the Main Street Strolls.

But even as the library is celebrating its past, it is looking to the future, having applied to the Champlin Foundations for grant to renovate the entrance to the library, adding some outdoor space.

“We would create a reading garden and an Internet courtyard kind of effect,” said library director Karen Taylor. “It would mean leveling the ramp and creating a longer, winding path that goes through the gardens, with more benches outside. On the other side, we’d have another patio … so that people could park their bikes there and have access to the actual lawn so we could maybe do more storytimes on the lawn.”

But they won’t learn if they get the grant until November. If they get it, said Taylor, work could begin next spring.