Letter to the Editor: Vote the Whole Ballot – It Matters 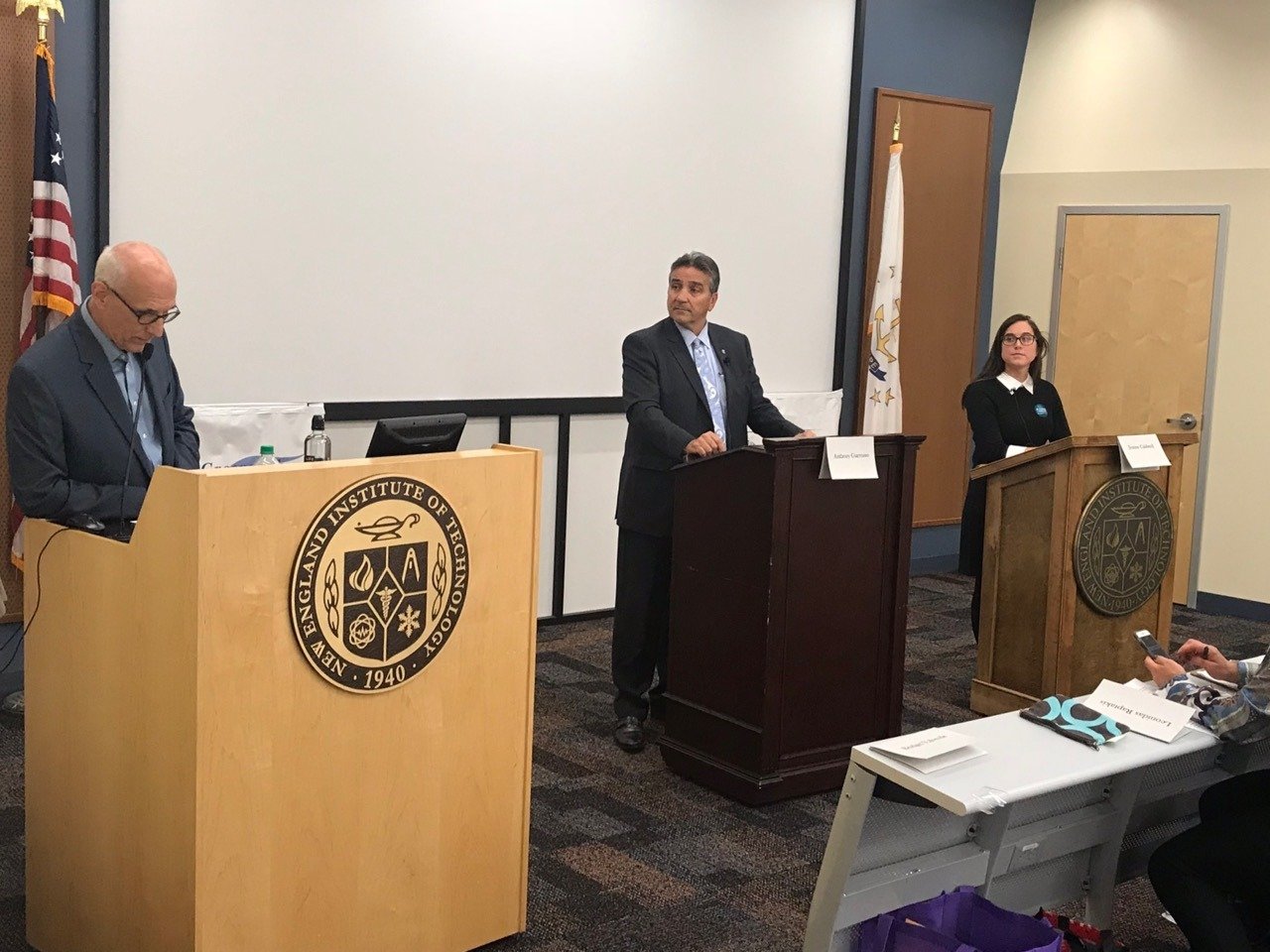 Above: Anthony Giarrusso and Justine Caldwell during the 2018 campaign.

It doesn’t take a political science degree to understand that the 2020 general election will be one of the most consequential elections in modern US history. Wildfires rage during a once-in-a-century pandemic, all while protests fill the streets in cities across the nation. Mass early voting is occurring alongside a major U.S. Supreme Court justice confirmation hearing, while state governments shut down and American renters camp outside of government buildings in hopes of getting a relief check during one of the most devastating financial crises this nation has faced.

The point is, our world is absolutely crazy right now, and the eyes of those uncertain about the future are pointed at this coming election, which is less than two weeks away. Though the citizens of East Greenwich are, of course, tasked with the important responsibility of helping to elect the next president of the United States, there is also a highly consequential down-ticket race that is happening right in our own backyard.

This important race is the challenge for the R.I. House District 30 seat. Incumbent Justine Caldwell is being challenged by former seat holder Antonio Giarrusso, who was voted out of this seat in 2018.

East Greenwich is and has always been my home. I have attended EG public schools from kindergarten through the high school, where I am slated to graduate this coming June. This town has raised me and I care about it so deeply, which is why I have felt compelled to participate in its politics as I have gotten older. In 2018, I knocked on doors for Justine’s campaign because I felt that I had found a candidate that represented the values that had  hallmarked my life in East Greenwich for as long as I could remember.

Justine has been an upstanding community member and compassionate person ever since I have met her. She meets with constituents, attends Town Council meetings, and cheers for the community’s kids at school plays and sports games.

Justine’s voting record from her two short years in office has been even more impeccable than her kind and understanding attitude. Throughout her service, she has voted to pass bills to advance Rhode Island’s future as a more just and fair state, such as one that established tax-free disability pensions for firefighters if they are diagnosed with cancer while on duty. She cosponsored important bills such as H 7541, which reworked Rhode Island parentage laws to create more justice within the familial legal system. She was also endorsed by major advocacy groups like Working Families and Rhode Island NOW.

On the flip side, her opponent has both a political history that reflects a poor character and a lack of appreciation for the ability to serve his community. Antonio Giarrusso held office from 2013 to 2019, and these six years were not reflective of a politician who cares about the well-being of his state or the district he represented. As deadly school shootings plagued the nation in 2018, Mr. Giarrusso dodged questions about a bill to ban bump stocks, the devices which can be used to make guns function as quasi-automatic weapons, and then proceeded to skip the vote where he would have to reveal his horrendous position that the Second Amendment protects monsters’ ability to put multiple bullet holes into school children in a matter of seconds.

Giarrusso has also failed to be on the right side of many other issues. He refrained from voting on a bill that would ban revenge pornography, the sharing of explicit images without consent, in the state of Rhode Island, a move that shows his failure to advocate for women’s rights.

It also seems that Antonio Giarrusso doesn’t want his own constituents to vote or to participate in democracy in any meaningful way. Maybe this would explain why he was hardly ever seen at Town Council meetings to hear out the concerns of his constituents back when he was a representative. This also might explain his support of a blatant attempt at voter suppression, when he voted against a 2017 bill that authorized automatic voter registration at the DMV.

The only time Mr. Giarrusso tried to show he cared about our community was by crafting a law banning the ultimate enemy: traffic cameras. Additionally, in response to a 2018 incident, he worked to regulate pressure cooker sales in order to “protect” citizens of Rhode Island, all the while advocating against legislation that would have kept firearms out of the hands of known domestic abusers. Time and time again, Antonio Giarrusso was handed the opportunity to show his concern for the citizens he was supposed to represent. Instead, he voted against the passage of gay marriage, neglected to raise the minimum wage for low-wage earners dependent on tips, and refused to support the establishment of a Climate Change Coordinating Council and the Renewable Growth Energy Program.

In all, Antonio Giarrusso had six years to prove to us, the electorate, that he stands for what we believe as a town and has compassion for the issues facing his community. He failed at every one of those opportunities. The people chose Ms. Caldwell in 2018 for a reason and will likely do it again for the same reason. So, to my dear EG neighbors, when you head to the ballot box any time between now and Nov. 3, remember who’s fighting for us and be sure that is reflected from the top to the bottom of your ballot.

Jordan Kalinsky is a senior at East Greenwich High School and a freshman at the University of Rhode Island.