I write to express deep disappointment in Blu’s recent misrepresentation of proposed changes to our town noise ordinance. By suggesting that our town “would essentially eliminate live entertainment as a whole,” Blu incited angry knee-jerk reactions from patrons across southern New England, mostly directed at local residents. In a classic slippery slope, they argue that “jobs will be lost,” “businesses will close,” and “tax dollars will disappear.” These statements are false, hyperbolic, and inflammatory. Management’s choice to propagate such falsehoods—and then to allow patrons to disparage and insult harbor residents—is irresponsible and unneighborly. If they wish to improve good will, they should set the record straight.

Blu has claimed that the Town Council has initiated “a movement” that could “drastically change the East Greenwich summers we’ve all come to know and love.” At the most recent meeting, however, we learned that proposed changes to the noise ordinance did not arise from an overzealous council that sought draconian anti-business restrictions. Rather, the council wished to offer redress to numerous concerns brought to them by harbor residents who felt previously unheard. 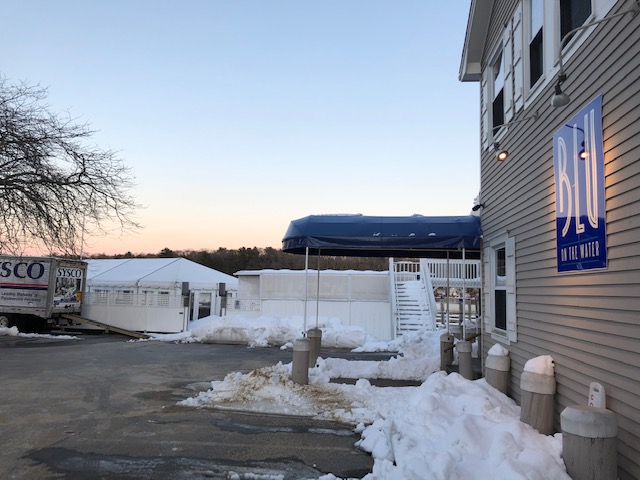 Blu on the Water features outdoor music in the summer months in the tent beside the water.

Blu has left the public with the impression that the council already decided to revise its ordinance, and purposely left waterfront businesses out of that discussion. That is inaccurate. On March 4th, the council heard residents’ concerns, but made no changes to the current ordinance. Consequently, they tabled discussion. Had they been anxious to punish the waterfront, they might have rushed to push changes through. They did not. On March 11th, the council heartily invited businesses to the table to work out differences with neighbors, preferably without litigation or government intervention. For the council, any changes to the noise ordinance would be a last resort.

Sadly, this last resort may prove necessary. Negotiations in previous years halted and broke down, and problems with noise—and disrespectful behaviors of patrons—have only gotten worse. Stories abound of harbor residents who can’t enjoy peace in their homes, with nightly, wall-shaking, pulsating bass compromising their health and quality of life. This noise penetrates their tranquility, day in and day out, through the wee hours, all summer long, with no relief in sight, and little that our small police department can do to intervene. But noise is only part of much larger concerns. Litterers leave bottles, cans, and valet ticket stubs in yards. Drunk drivers and bikers careen recklessly through narrow streets. Valets and others park inappropriately. Drunks wander onto properties, vomiting, relieving themselves on doorsteps, and shouting beneath windows. Such behavior is unacceptable. While businesses can’t be held responsible for all of this, they should be partially held to account, especially if they encourage an atmosphere that over serves rowdy club-goers.

The harbor has long been disrespected, as if residents here should be treated differently. In the last meeting, a resident referred to the harbor as “the red-headed stepchild” of East Greenwich. Living below Main Street for nearly two decades, I largely concur. It often feels like different rules apply to the harbor. Sadly, by allowing scores of patrons to make hurtful and ill-informed comments toward residents, Blu exacerbated disrespect toward its neighbors. On Blu’s Facebook page, harbor residents were called “petty rich people,” “stuck up old ass people with no lives,” and “new money pricks,” among other choice insults. By allowing hateful commentary to be directed toward neighbors, Blu has not only undermined peaceful cooperation, but has also risked hurting their business, by alienating people in town who might otherwise be customers.

Blu has suggested that limiting after hours noise in the waterfront to 60 decibels would effectively ban live music. This is misleading. Reducing our decibel level would put us in line with surrounding communities, and would set our limits 10 decibels louder than Boston. Can anyone argue with a straight face that Boston destroyed its night scene, or is no longer a desirable location for restaurants or nightclubs, because it lowered its decibel level to 50? Limiting the acceptable after-hours decibel level to 60, outside the property boundary of the establishment, would not eliminate live outdoor music. Neighbors are simply asking businesses to turn down the volume from “11.”

Personally, I prefer to give my business to a restaurant where I can carry on conversations with friends and family without having to shout over the din. I’m sure I’m not alone. In fact, lowering decibel levels could potentially improve the customer experience for like-minded restaurant goers who might support these establishments.

My wife and I are longtime patrons of Blu, and often enjoy dinner and drinks there. Living in the harbor, I have been pleased with recent development of Main Street and the waterfront. I love living within walking distance of wonderful restaurants and premier entertainment. I do not hear any noise from the waterfront at my house, and I am not bothered by what I hear when I regularly walk by the waterfront in the summer. But businesses should be a little more respectful toward their neighbors, many of whom may be potential patrons themselves. It doesn’t seem like that much to ask for businesses to turn down the volume of music, install additional soundproofing or sound limiting equipment, and negotiate respectfully with neighbors.

Although waterfront noise doesn’t bother me, I stand in solidarity with my neighbors on the other side of the tracks. I believe their stories of the intolerable noise they face. While the Chelos promised to offer “smooth rock,” country, and jazz to its patrons when they first opened Blu, the reality for neighbors has been far from the light, mellow, soft rock sounds one might expect. The throbbing bass and bone-shaking noise experienced late into the night and early morning by local residents is hardly shuffleboard-ready. What Craig Chelo described as live music that “East Greenwich residents would really appreciate,” has been far from that for many harbor residents. In fact, it was recently described by one resident as “hell.”

Blu’s appearance in 2012 coincides directly with complaints made about the Chelos’ establishment in Warwick, which led to reconsideration of that city’s noise ordinance. In an article published in the Warwick Beacon at that time, Ward 9 Councilman Steven Merolla was quoted as observing that “Chelo’s on the Waterfront has been booking bands with large followings, thus, attracting more patrons.” Hence, “parking is needed and patrons are parking in front of peoples’ homes.” Even more disturbingly, Merolla noted that patrons were behaving badly, by “urinating and vomiting on private property,” and “drinking beer from cans and bottles as they walk from their cars to the venue and littering before entering establishments.”

Sadly, this description sounds altogether too familiar, as it perfectly describes the East Greenwich waterfront in recent years. In order to circumvent government intervention in Warwick, the Chelos simply moved their live music operation, in the hopes that they could get a better deal from the government who might adopt a more laissez-faire approach. This is unacceptable. Residents in all of East Greenwich must stand up for each other’s rights, and let businesses know when they have overstepped their boundaries. That is not anti-business. It’s just civilized common sense.

By stoking resentment among patrons in neighboring communities and states, Blu adds fuel to a fire that could have dangerous consequences. A petition with thousands of signatures has been circulated. A rally “to save live music and the EG waterfront” is currently planned. News stories were broadcast on two major television networks. Blu’s words have inflamed significant vitriol directed at residents. One patron vowed revenge by threatening to drive through our neighborhoods with music blasting from her car speakers. Patrons notorious for disrespecting people’s homes and properties might now be emboldened further to disrespect those same residents, thus placing more stress on our overworked police department, who lacks the manpower or resources to handle large summer crowds. We already have too many drunk drivers traversing our neighborhood, speeding and blowing through stop signs. We have too many drunks behaving obnoxiously on foot. This is a recipe for disaster, and Blu should tamp down the possible conflagration—and even possible incitements to lawbreaking—that it has tacitly approved, if not actively encouraged.

Nobody wishes to live in a community devoid of live music. Nobody wants to discourage vibrant and bustling businesses, which contribute to our economic success, and make us a preferred Rhode Island destination to live and play. Nobody wants businesses to shut down or go away. I wish both sides well. I hope agreements can be reached that are satisfactory to all parties. I wish no ill will toward Blu or any other waterfront restaurants, which I frequent during the summers, and hope to continue to enjoy. However, Blu would be well-advised to adopt a kinder, more respectful approach, which shows they are listening, can consider perspectives of neighbors, and can act accordingly. Adopting a positive, respectful attitude—and encouraging others to do the same—will make the harbor and the waterfront more enjoyable for everyone.