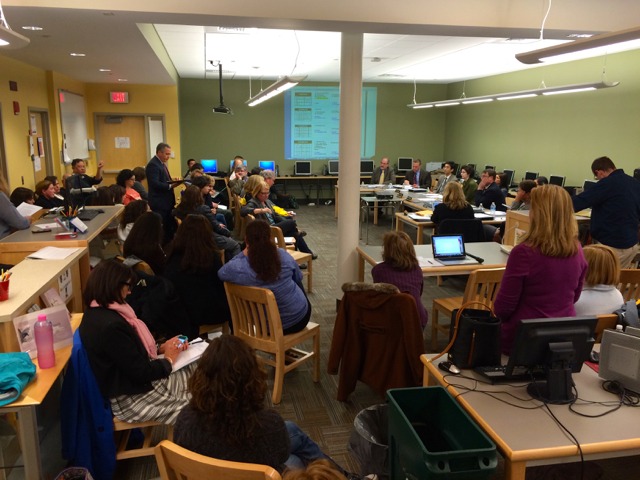 The School Committee heard proposals from the ad hoc School Start Time Committee ranging from changing nothing to two proposals pushing back the start time for Cole Middle School and EGHS by a half hour and one proposal that would give middle and high school students an extra hour in the morning at their meeting Tuesday, April 7.

The ad hoc panel was formed last year in the face of mounting evidence that pre-teens and teens do better when they get more sleep. In August, the American Association of Pediatrics issued a policy statement calling for the start of school for middle and high school students to be 8:30 a.m. or later. The EG committee held two public forums featuring sleep specialists and, at the first one, the principal of the Sharon, Mass., high school, which made the switch to a later start time five years ago. All advocated pushing back the start of school, despite obstacles.

The committee also polled students, parents and teachers about start times. Among the findings was that parents think their children get more sleep than the children say they do. The survey also showed significant support for later school start times, with 63 percent of parents and 59 percent of students in support.

The only option with a price tag was Option 2, which would also make it possible to move away from a three-tiered bus schedule to one that is two-tiered. The cost, $143,000, would go toward the extra buses to accommodate all elementary school students in one time period.

“We spent a lot of time looking at how the bus schedule was driving – pun intended – start times,” said Supt. Victor Mercurio. East Greenwich is not the only community struggling with that – the report cites U.S. Education Secretary Arne Duncan, who had urged school districts to make start time decisions based on research rather than bus scheduling.

At the meeting Tuesday night, Katie Sharkey, an EG parent and one of the sleep researchers who presented at the forums and has been a vocal advocate for later start times, said she hoped the School Committee would adopt one of the later start time options.

“I think it will have an impact even if it’s a half hour,” she said. Sharkey also said she hoped the later start time issue would lead to a discussion for less homework.

Colleen Mollicone, a parent of two middle school students including one with special needs, said they both needed the later start time, if for different reasons.

“I’m more concerned with my high level learner because of everything on her plate,” said Mollicone. “My child with special needs, getting up is hard, getting his homework done is hard. He’s not awake until 9 o’clock – he’s here [at the middle school, where the meeting was held], but he’s not awake.”

“I definitely came into this neutral, thinking, ‘What’s the big deal?'” said parent Joy Weisbord. But she said she attended the forums and came out very supportive of the later start time.

“The Sharon principal was very persuasive,” she said.

“The average start time in the U.S. is 8 o’clock,” said parent and ad hoc committee member Amy Snyder. “This is about public health.”

Snyder said that in response to comments from three members of the Durant family, all of whom are against the move to a later school start time.

Matt Durant, a student at EGHS and a member of the ad hoc committee, said he would only go to bed later, especially during football season, when he would get home later from practice and, so, have to stay up later to finish his homework.

Parent (and former School Committee member) Bob Durant echoed his son’s comments, noting that he thought some activities now after school would be pushed before school – “nature abhors a vacuum.”

But his comment about football practice being three hours long caused parent Cheryl Osborne questioned the need for a three-hour practice.

“Why does sports have to be that consuming?” she said, with several in the audience audibly agreeing with her.

“Every team [in the state] practices for three hours,” said Bob Durant. “I don’t think we should expect our football team to sacrifice – ‘We’ll just let Middletown beat us for five years until they see the light.'”

EGHS student Kate DePetro said she really appreciated the later Wednesday start time (on Wednesdays, students don’t need to be at school until 8 a.m.) and she said the Advisory period on Wednesdays was very helpful for being able to contact teachers for help so she hoped it would remain in the schedule.

School Committeewoman Mary Ellen Winter noted that the big difference between East Greenwich and Sharon, Mass., was study halls. In Rhode Island, study halls do not count as part of the required daily 330 minutes of instructional time, so they were eliminated a few years ago. In Massachusetts, study halls are considered instructional time. Study halls, said Winter, allow students to seek out help or catch up on work during the school day.

“That changes the whole game,” she said.

School Committee members did not express how they would vote – and the issue was not up for a vote – but Committee member Yan Sun did say she appreciated that the ad hoc panel was able to come up with ways to move the start time that would not add cost to the budget.

The topic will be on the agenda at the School Committee’s next meeting, April 28.