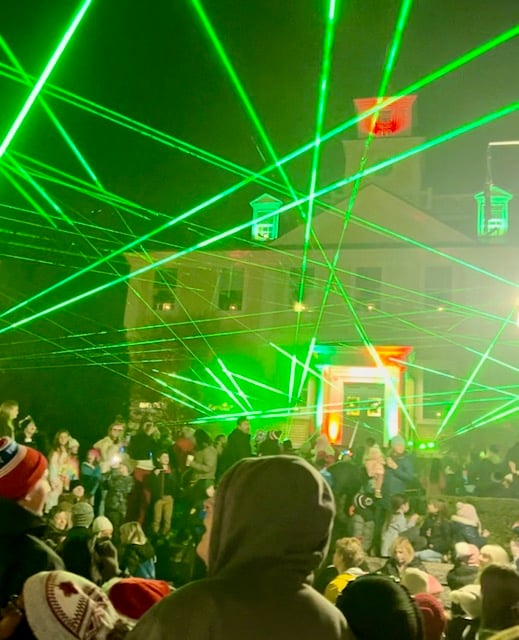 Originally scheduled for Saturday, December 3rd, rain and heavy wind forced the Holiday Parade and Lighting of the Tree  to be postponed to Sunday, Dec. 4. The date may have changed, but the results – with the added laser show – were still magical.

If you felt like you were taking part in a holiday movie, you were not alone. As hard as it was to take your eyes off the show, taking a quick glance at the large crowd showed why the holiday season is so special. Smiles were on everyone’s faces from young to old. From saxophones and trombones decorated in lights, to ballerinas dancing in front of Town Hall, and of course Santa arriving in a fire truck, the scene was set. Then came the laser show!

East Greenwich Chamber of Commerce received a state grant to help enhance outdoor events and this year’s Holiday Parade was the fortunate recipient. During speeches from Town Council President Mark Shwaeger and the Chambers Executive Director Steve Lombardi, fog machines started to pour out a haze over Main Street and then the colorful laser lights filled the sky. A holiday playlist of all the great hits was playing and soon the crowd found their dancing shoes.

Children were sitting on the shoulders of their parents pointing at the lit up sky. Core memories were made and fun times were had by all.

Amy Moore from the Chamber said she was unsure the laser show could be repeated unless a big sponsor comes in next year to help with funding.

“I would not say this is a one and done. It was so cool and I think we can make it happen. With a little magic and lots of funding,” she said.

While the laser show is not a guarantee for future holiday parades, it was well received and made for a truly special evening. Never underestimate the power of magic. Dancers from the Providence Ballet Theatre’s production of Twas the Night Before Christmas at the 2022 East Greenwich holiday extravaganza. Photo credit: Jesse Tolppa