Just Give Me the Facts! Let Me Form My Opinion! Above: Alan Clarke, far left, with the float for the then-Rhode Island Pendulum that was part of the sprawling East Greenwich Tercentenary Parade in July 1977 (read more about the celebration here). 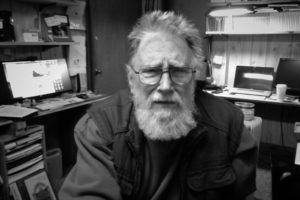 In 1960, A. J. Liebling, noted journalist associated with The New Yorker, in 1960 wrote an essay that included the following passage: “Freedom of the press is guaranteed only to those who own one.” Of course that precedes the internet. Today we find that anyone has the power and freedom of the press if they have a computer, an internet connection, and the ability to write something that someone else will care to read.

This is both a good thing and a bad thing. With today’s downsizing of the printed newspaper page and the time-restricted depth of coverage of National and local television news, one has to search harder than ever for factual news regarding what goes on in our lives.

Most of my working life has been as a graphic artist in the offices of weekly newspapers, specifically the local Pendulum and the Block Island Times. I am not a journalist although I’ve worked with many good ones. My job was to make what they say visually pleasant and easily readable and to do so, I had to read the articles as they went into the papers. I was well instilled by my editors to note the fundamental differences between factual reporting on a topic and offering an opinion on it. We all have opinions and rightly so. However well established and time-honored newspaper traditions hold that factual news dominate the media and all editorials, opinions, and letters to the editor belong on the clearly identified editorial pages. When I found an article too heavy on opinions and too light on facts, I’d point it out to the writer or editor and argue the merits. I didn’t always win, but I never totally lost.

Here in East Greenwich we are slowly making the transition from an active newspaper to an online news source, the East Greenwich News. EG News can put out a breaking news story as soon as it happens and the dust settles a little. We are blessed with this news source, the brainchild of Elizabeth McNamara, who has been trying very hard to make it not be a totally voluntary gesture. Good reporting takes time, an understanding of events, an interest in getting the facts straight, and above all, the desire and ability to get the story to you, the East Greenwich public.

Recent town politics took an odd turn by anyone’s standards. Longtime Townies were not used to the almost daily reverberations from Town Hall. New folks seemed to think this was business as usual. It was not. And all through it, Liz McNamara kept the public informed and the public decided enough was enough. A total wash of the Town Council took place and today sits the first total Democrat council in anyone’s memory. Not… due to Liz’s opinions (I was looking for them) but by her steadfast reporting the facts as best as she could get them.

I am on the EG News Board of Directors and I often wonder why they want me. I’m an old geezer  and, for the most part, a third person observer (TPO) of life today. But I do recognize the role Liz is playing on the East Greenwich scene and I actually think that she is one of the few with the ability to pull it off. As such, I have her back. And while she is looking for donations, remember that very few newspaper people ever make any money. It’s a labor of love. Liebling’s quote today could be “Freedom of the press is guaranteed only to those who can afford it.” By donating to the EG News cause, you will get a big return of your investment.

Alan Clarke, town historian and town curmudgeon, is a founding member of the board of East Greenwich News.

* East Greenwich News is a 501(c)(3) nonprofit. You can make an online donation or become a monthly contributor by clicking on the Donate button below. If you prefer to contribute offline, our address is EG News, 18 Prospect Street, EG, RI 02818. Thank you.