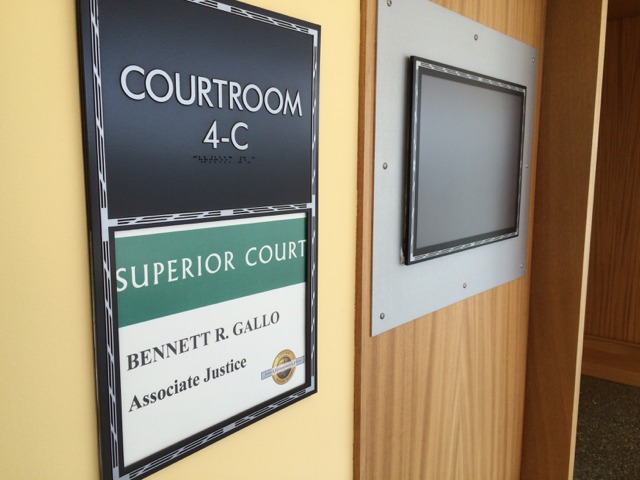 The case may have gotten a lot smaller since Superior Court Judge Bennett Gallo dismissed many of the claims against the defense, but the jury did not come to a quick decision in the Cole construction trial Monday, spending the afternoon deliberating and adjourning for the day without a decision.

Six residents of Sarah’s Trace sued the town, the school department and several construction companies over damage they say was caused by construction of the new Cole Middle School between 2009 and 2011 – vibrations from certain construction equipment in particular. The plaintiffs are Chris and Susan Lamendola, 50 Sarah’s Trace; Tom Hogan and Cynthia Pelosi, 40 Sarah’s Trace; and Wendy and Keith Amelotte at 35 Sarah’s Trace.

The trial began March 4, but Gallo dismissed claims of damage and negligence on Friday, March 20, after the plaintiffs rested their case. The judge said the plaintiffs’ lawyer, David Maglio, had not proven which cracks were caused by the construction and which pre-existed construction, making it impossible to determine damages. Gallo also did not allow the plaintiffs’ experts to testify on damage estimates.

The remaining claim before the jury is nuisance. To prove the nuisance claim, the plaintiffs have to show that the construction cost them the normal use and enjoyment of their property.

In his closing argument to the jury, lawyer for the town (and school) Michael DeSisto said there can only be three reasons for private nuisance – noise, felt vibrations and cracks – and that the nuisance must result in physical discomfort.

He pointed out that the homeowners never had to leave their homes and continued to be able to enjoy their properties.

Maglio, in his closing argument, said the construction did indeed cause nuisance to the homeowners, “for one year, 9 months and 16 days” – the length of the construction.

He argued that vibrations felt in the mornings before the plaintiffs left for work were traumatic, and the noise from the construction and the constant checking for damage to their properties rose to the level of nuisance.

Maglio said the town could have made things better for his clients but chose not to, concerned more with saving time and keeping the construction schedule.

In terms of all the expert testimony over seismographs and boring holes and vibration waves, Maglio encouraged the jury to “make up your mind, and satisfy yourself instead of listening to the witness.”

“I’m asking you to compensate my clients for what they have been through,” said Maglio. “Put a value on that.”

In his instructions to the jury, Gallo said the burden of proof was on the plaintiffs. And, because testimony about damages was not allowed in, Gallo told the jury it could not consider any damage repair estimates. He also noted that the jury could decide in favor of the plaintiffs without awarding any monetary settlement.

The jury began their deliberations at 1:30 p.m. Monday, with 123 plaintiff exhibits and 43 defense exhibits – photos, engineering reports, emails – to refer to as needed. During deliberations Monday afternoon, they asked the judge whether nuisance was related to damage or discomfort (nuisance was not defined by damage, said Gallo) and if physical discomfort fell under the nuisance umbrella (no, said Gallo). Jury deliberations will resume on Tuesday at Kent County Courthouse.

You can find an archive of EG News stories about the homeowner lawsuit here.