Lights of honor
Shine on high
The wings of sailors
Adorn the sky
For we the people
Who look for stars
To guide us through
This life bizarre
Today such an angel
Entered that realm
Like those before him
He’s taken the helm
A journey so harsh
Yet filled with great love
The pain is gone
Our pilots above
Goodbye Senator
Father, hero, John
By your very example
That light’s never gone
Thanks for the service
Thanks for each day
Thanks for the honor
You’ve shown us the way 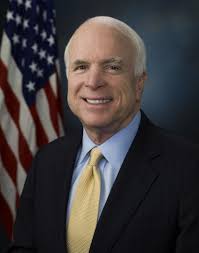 The truth bears witness to the deeds of man. For few this occurs in a lifetime.

John McCain’s service, honor and self-effacing efforts are examples to us all. The mold was broken, we now wonder who will be next. Until then, let’s learn from his tireless efforts. He was a hero.

Being Shot down proved him a man. Being imprisoned proved him a hero. The life of service and love shown after these have proven him to be the personification of ideals few ever attain. Rest in peace, John McCain.