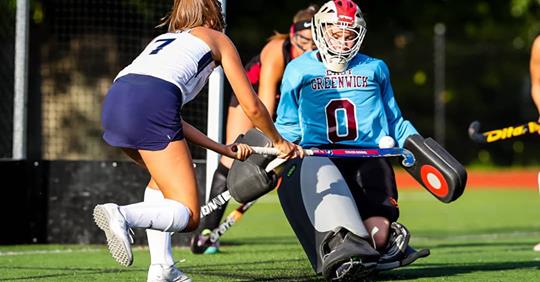 It’s a position nobody likes to play in a sport that seems foreign to most of us. Who grows up wanting to be a field hockey goalie?  East Greenwich senior Jessica Imbriglio limped into the sport after a foot injury tripped up her love of track in middle school and the rest is now becoming history. 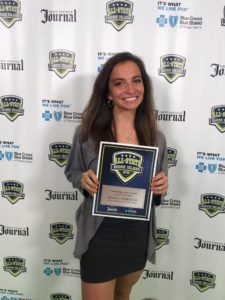 Jessica is in the middle of a spectacular senior season. She currently is the leading goalkeeper in the state in goals against. Imbriglio has allowed just six goals in 13 games for a saves average of 0.889.  Her stellar play has helped the Avengers build a 11-1-1 record, tied for second place in the division.

Incredibly, Jessica grew up with no interest in field hockey despite the fact older sister Jennifer starred in the sport and three others before graduating from EG a year ago. “I went to summer camp to play field hockey in the 6th grade and I didn’t like it. I then suffered a foot injury in 8th grade and had to stop running cross country. That’s what made me switch over to field hockey.”

A few games into her freshman season, Jessica took over in net and has been there ever since. “I found field hockey to be very intriguing. I was playing a position nobody would like to play in the first place.  Once I understood it and improved my skills, I fell in love with it and that’s why I want to play it in college as well.”

Part of maturing in the sport was learning how to deal with the defeats. “It used to affect me as a freshman and sophomore.  I would bring it home. I would get down on myself. Then I realized I should have played the game instead of looking back on the mistakes.  I now try to keep girls from pondering their mistakes. We should recognize them and move on.”

That attitude has paid big dividends.  As a freshman, Jessica had the lowest save percentage in the division. By the next year, she had the second highest save percentage at .901. “Most people say the game is 90 percent mental and 10 percent physical. Being a goalie is 99 percent mental and one percent physical. You definitely have to have the mental part down. It has to go through a lot of players before it gets to you.” 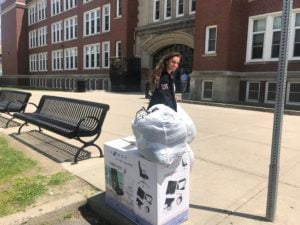 Jessica Imbriglio with clothing donated to her ‘Students4StudentsRI’ clothing drive, a campaign she started three years ago.

The second-team all-state goalie credits her big sister Jennifer for helping to develop her game in net. “Without her pushing me I wouldn’t be where I am now. She was a defender, so she played right in front of me. It was really nice. It was like my big sister was protecting me. I loved playing with my sister.”

Highly respected Coach Deb McMullen has five state titles and a total of 11 appearances in the Division 1 Championship over the last 31 years. She has helped turn Jessica into a star goalie. “Jessie has worked incredibly hard the last year or so to get herself in optimal condition for her senior year. She is quick, flexible, has great goalkeeping techniques and tremendous focus. She is determined to keep the net clean day after day in practice and in every game.”

While the net is clean and dry, the team was all wet while training for the season. “After a field hockey scrimmage on the weekends we would make plans to go to someone’s pool,” Jessica said. “I’ve never played a sport where I have been so tight with everyone. All the extra things no team has done. I think that ultimately has helped me in the field. It’s something other teams don’t have. That’s why I love the sport.”

The Avengers advanced to the state semifinals before being ousted by eventual champion Barrington last season. Jessica wants more this season. “I personally felt after the first goal, we were playing not to lose instead of playing to win. That loss helped improve us going into this season. Our mental status is very strong.”

Before you stop reading, her play in net is only half of Jessica’s story. Her efforts off the field are making a huge difference in the lives of others. “When I was seven, I went to West Bay Community Action and saw people in need. During my freshman year I started a clothing drive called ‘Students4StudentsRI.’ I collected gently worn clothing and backpacks, sorted everything and went to six schools in Pawtucket, Providence and Central Falls (cities with the highest percent of children living in poverty) to pass them out.”

In addition to serving the community, Jessica is also impacting her school as editor in chief of the yearbook, a member at large on the student council, part of Model United Nations, a member of the Book Club, Beach Club and Air Band coordinator in charge of the 100 students. She sums it up by saying, “I love community involvement.”

Jessica will finish out her senior year as captain of the sprint team and competing in the long jump for indoor and outdoor track. She hopes to play Division 1 field hockey and pursue a career in nursing.  Coach McMullen sums up her star goalie best, “Driven, passionate, focused, dominant!”

Ken Bell spent 48 years as a sportscaster on radio and television, the last 35 as Sports Director at ABC6. He also worked as a weekend sports anchor at NBC 10 in the late ‘70’s. Ken was voted RI Sportscaster of the Year four times.  He continues as part of Friday night Pick 6 high school football coverage on ABC6.