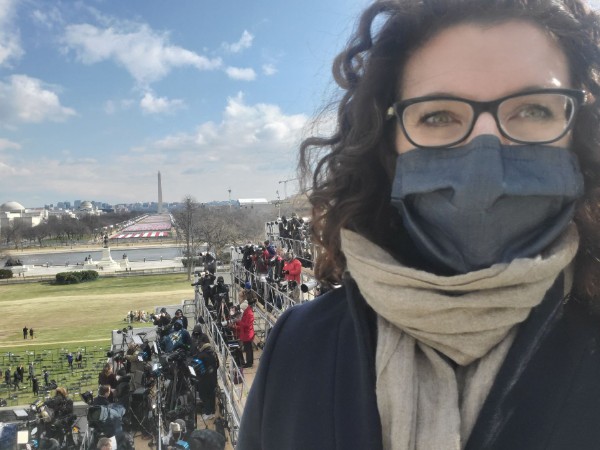 For an inauguration where there were only around 1,000 guests, compared with the many thousands usually, East Greenwich represented.

“Waiting with @JimLangevin to get through security for #Inauguration. So much energy & excitement in Rayburn. Beating heart,” tweeted @meganranney Wednesday morning.

EG resident Megan Ranney, M.D., attended the inauguration of Joe Biden as the country’s 46th president and Kamala Harris as vice president Wednesday, the single guest of Rhode Island Rep. Jim Langevin. Typically, Langevin would have a hundred or more tickets to distribute but because of COVID-19, attendance was extremely limited.

When Ranney, an emergency department doctor at Rhode Island Hospital, got the invitation she was on shift at one of the state’s two field hospitals. In addition to her regular job, Ranney has become a vocal champion of healthcare workers during the pandemic, with more than 82,000 Twitter followers and frequent appearances on CNN.

She was thrilled with the invitation but it wasn’t an immediate yes. She had to think it through – the travel and safety concerns in particular. Because of her status as a front line doctor, however, Ranney has been fully vaccinated. She said yes.

They flew down to Washington D.C. on Monday, got COVID-19 tests Tuesday, and attended the inauguration Wednesday.

“It almost felt surreal,” Ranney said Wednesday night. “It felt like before Christmas, or your wedding, and you keep pinching yourself….”

There were some aspects of the day that were totally normal – the Dunkin’ coffee she picked up, the mask she put on.

Then there were the truly special moments.

“This is the first time there’s ever been a woman in the executive branch, and a woman of color,” she said. “Those moments, I tried to hold them and recognize them for what they were. It was terrific.”

When asked about other special moments, Ranney mentioned 22-year-old inaugural poet Amanda Gorman – “She was just breathtaking in her energy and enthusiasm.” From her seat , Ranney watched Gorman as she met former President and First Lady Barack and Michelle Obama. “You could just see how excited she was,” said Ranney.

Ranney also appreciated Meena Harris, Vice President Kamala Harris’s neice, who was there with her young children who were behaving like … young children.

“As a mom, I could relate,” she said. “I felt there was this honesty to the inauguration.”

Ranney said she would have loved to attend an inaugural ball – there were none this year because of the pandemic – but she knows she was at a remarkable, unreplicable event.

Because Ranney has become such a public persona during the pandemic, her decision to attend the inauguration was not frictionless.

“I have gotten some blowback,” she said. After all, Ranney has been urging all of us to do everything we can to avoid COVID-19, including travel.

She said her vaccination status made the trip possible and she knows she’s lucky.

“I am very, very privileged right now to be in that situation,” she said. Her biggest message during the pandemic has been the fear of overloading the healthcare system. Because she has gotten the vaccine, she knew she wouldn’t burden the system. But, she said, “I’m still taking all of the normal public health precautions. I’m still wearing masks. I’m not eating in restaurants.” Langevin, too, has gotten a dose of the vaccine.

“I look forward to the day that we all have the vaccine in our arms and I feel so lucky that I’ve gotten mine,” Ranney said. She will be back at her job at the hospital this weekend.