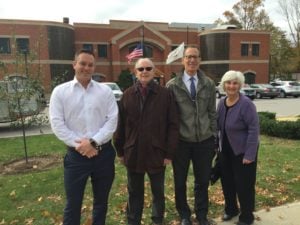 Town Council members past and present were there to mark the procession of Gianna Cirella. From left, Sean Todd, Michael Isaacs, Mark Schwager and Marilyn Kiesel.

After months of sitting on the sidelines, former Town Council President Michael Isaacs – a Republican who served for 12 years before stepping down in 2016 – said Monday the council should name an interim town manager and “go full force” with a search for permanent town manager.

Referring to Superior Court Judge Susan McGuirl’s strongly worded ruling last week against the Town of East Greenwich, Isaacs said, “In light of the ruling, it really is time for the council to step back and assess the situation.”

McGuirl ruled that the appointment of Gayle Corrigan as town manager last June was “null and void,” citing EG for five Open Meetings Act violations, as well as reinstating firefighter James Perry, who Corrigan fired in July. In her ruling McGuirl said the Town Council had “misled” the residents by their actions.

The Town Council meets in a special session Tuesday to address the issues raised by the ruling. The agenda calls for reappointing Corrigan as town manager and ratifying all actions she took as town manager between June 19 and Tuesday.

RI Future’s Bob Plain, who grew up in EG and owns a house here, was the first to get Isaacs to talk publicly about the ruling and the Town Council’s predicament.

Until now, Isaacs declined to comment about Town Council activities, saying he was no longer close enough to the situation. Asked why he was willing to speak about the Town Council’s actions now, Isaacs told EG News, “There’s just more and more people talking about this. I needed to say something at this point.”

He added, “I agree with the overarching goals of consolidation and shared services. We have real legitimate financial issues. It is a question of how they are implemented.”

Isaacs said he believed the three-year firefighter contract the Town Council approved in 2016 – while he was president – was not as fiscally prudent as he had hoped when it was voted on.

“Those things need to be addressed by the union and the town by sitting down and talking,” he said. “The sides have to talk because you do have to work together. I would certainly like to see if the two sides can come to a resolution.”

Plain also reached state Sen. Mark Gee, who served on the Town Council for two terms before moving to the State House.

“I am not a believer in creating angst or being confrontational. I would much rather see things done in a quiet, respectful manner. I’m a graduate of the Michael Issacs school of trying to work things out,” Gee told Plain.

Meanwhile, people on both sides of the issue are rallying the troops.

On the pro-Corrigan side, Councilman Andy Deutsch posted on the Rhode Island Young Republicans Facebook page: “YRs … We need YOU!! The East Greenwich Town Council has a special meeting where we anticipate major union interference … looking for some YRs to help take up some seats … For every seat you’re in – a union agent won’t be!!”

And, in a post on its Facebook page, the EG Republican Town Committee expressed its support for the Town Council, playing off Judge McGuirl’s comment at the end of her 73-page ruling that “It’s time for East Greenwich to turn the lights back on and keep them on.”

“As our Town Council continues down the path to ensure our financial future is secure, they have our trust, confidence and support,” the Facebook post concludes. “The lights are still on in East Greenwich. The Town Council and the Town Manager are working diligently to ensure East Greenwich can afford to keep them on.”

On the anti-Corrigan side, a new group called Fresh Start EG has a petition circulating online that had gathered 476 signatures as of 9 p.m. Monday calling for the Town Council to appoint an interim town manager and launch an immediate search for a permanent town manager. And the EG Town Democratic Committee has organized a forum for after Tuesday night’s meeting. In addition, the EG firefighters distributed leaflets across town Sunday.

“It exceeds more than I’ve gotten on any issue in any of my terms on the council,” he said. Schwager is in his fourth (nonconsecutive) term. “These are emails that are being sent to all the councilors.”

Of the emails, only two were in favor of appointing Corrigan. The rest were opposed to her appointment.

There is another petition circulating online, this one in favor of appointing Corrigan, but its authenticity is questionable. None of the six signatures as of 9:45 p.m. Monday night were from East Greenwich.

The Town Council meeting Tuesday starts at 7 p.m. at Swift Community Center. Council President Sue Cienki said doors will open at 6:30 p.m. As of Monday night, Cienki did not have information about what would happen if the space filled and people were left out. Swift can hold 253 people. An email Sunday to Cienki, Corrigan and Corrigan’s assistant Michaela Antunes about moving the meeting to the much larger EGHS auditorium (capacity 700) went unanswered.