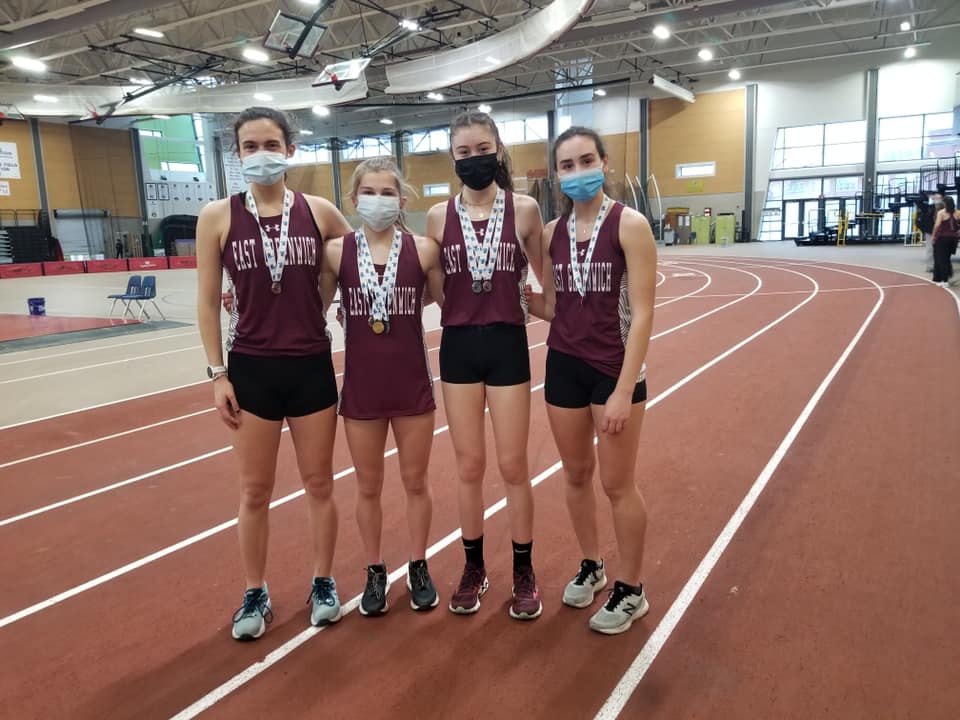 Above: The 4×4 relay team, from left, Jessica Martin, Rylee Shunney, Reese Fahys and Kendall Stearns. Photo by Coach Karen Lockhart. Other photos by Chuck Nadeau (find all his photos at chuckn.com).

The East Greenwich Girls placed fourth in the Indoor Track State Meet Saturday, behind La Salle and North Kingstown and Moses Brown (who tied for second), with particularly strong performances from Rylee Shunney and Reese Fahys.

“It was a great accomplishment for the girls this year,” said coach Mike Thibodeau. Shunney placed first in the 600 meter, with a 2 second PR. She ended up in the race after her run in the “last-chance” meet a week earlier.

Shunney also earned a second place finish in the 1500.

“That kid ran the 1500 with her head,” said Thibodeau. “She was very smart in running that race. It was a tactical race from the start. I encouraged her to take the lead and she did. And she really made a surge, Rylee was right on [eventual winner] Sophia Gorriaran’s heels.”

Shunney had one more race that day – the 4×4 relay, with Kendall Stearns, Jessica Martin and Reese Fahys – and a third place finish.

Thibodeau said the girls were in fifth place going into the third leg. “Once Reese took the baton, she got us to third place and Rylee almost caught the second-place girl. That was Rylee’s third event. Running on pure heart at that point,” he said.

Fahys came in second in the 3000, behind Kaylie Armitage, a senior from La Salle who was the 2020 champ as well.

“She just couldn’t cover the late surge in the latter part of the race,” Thibodeau said of Fayhs. “Kaylie made her move and Reese just didn’t have it that day to cover the distance. She still came in a strong second.”

Thibodeau said having such strong runners helped everyone. “It raises the level for everybody. When you have two girls with that caliber, they work off each other very well. They’re going to make each other better,” he said. “They both have tremendous foot speed and tremendous track awareness.”

He also noted freshman runners Alicia Chen and Ava Peters, who were the top two freshman finishers in the 1500, coming in 10th and 12th respectively.

The boys placed 15th, with good performances from Jacob Connolly, Jack Lombardi and Andrew Mega. Thibodeau noted Connelly, a junior, in particular. Connelly finished in fifth place in the 3K with a 12-second PR.

“He ran the first 2K with his head and the last 1K with his heart. He had a great lead up into that race … with all that training he did. That young man is really firing on all cylinders.”

Mega had a PR in the preliminary 55 meter hurdles; he went on to place 8th in the final.

EG senior boys and girls ran in the 4×8 relays. “I really wanted to give that to the seniors,” said Thibodeau. “They lost their outdoor season last year and I wanted them to have the experience of being part of the 4×8. 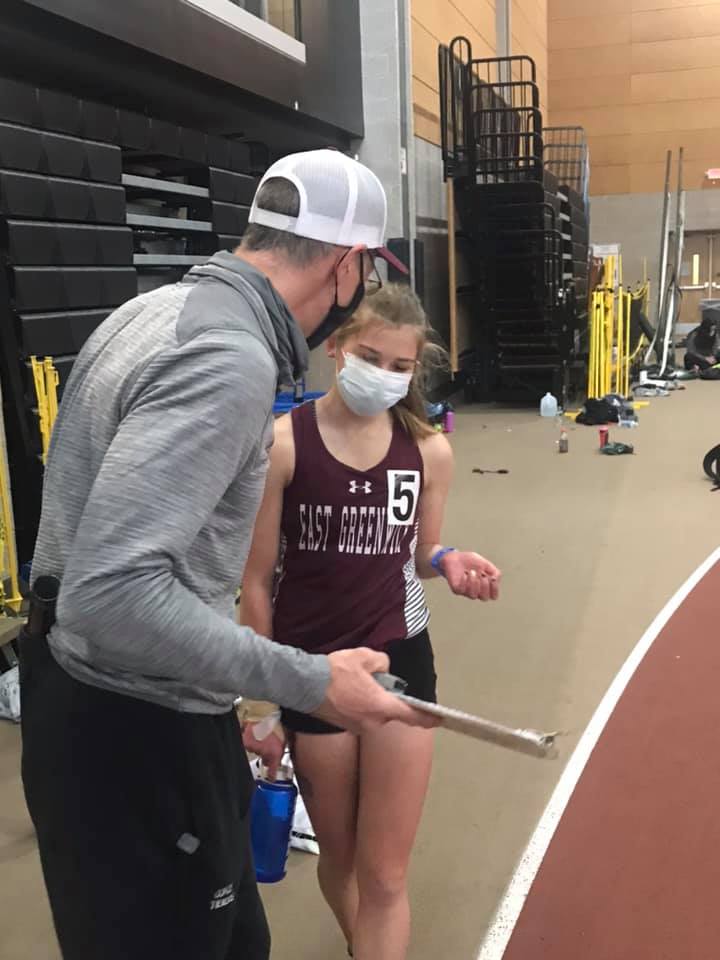 Coach Mike Thibodeau talks to Rylee Shunney before the 600. Photo by Karen Lockhard

Jacob Connelly during the “last chance” meet earlier in February. At States 2/27/21, he finished in fifth place in the 3K with a 12-second PR. Photo by Steven Mazzone/Ocean State Running