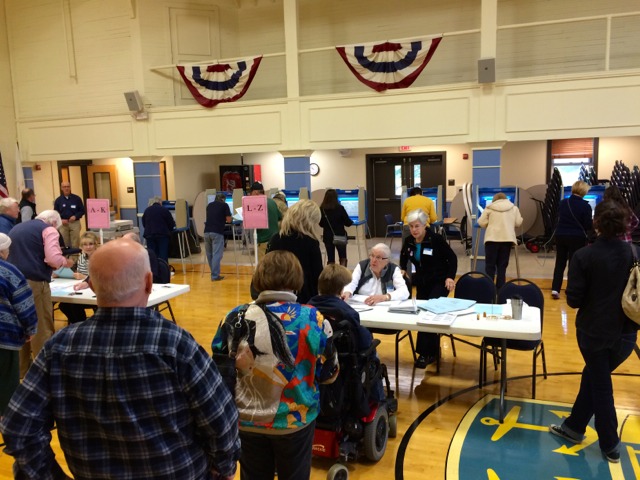 Although it was a lively campaign season in East Greenwich and we had no dearth of candidates, it turns out that turnout was lower than in the past two general elections. Including mail ballots, 5,648 votes were cast on Election Day 2014, 51.2 percent of eligible voters.

In the governor race, East Greenwich liked Republican Allan Fung just a bit more than Democrat Gina Raimondo, the actual winner on Tuesday, 41.6 percent to 41.3 percent. Robert Healey, the Moderate Party candidate, got 15.9 percent of the vote in EG.

For lieutenant governor, EG also preferred the Republican candidate, Catherine Taylor, to the winner, Democrat Daniel McKee. Taylor got 45.7 percent to McKee’s 43.1 percent. Moderate William Gilbert got 7.3 percent and former EG resident Tony Jones, of the Libertarian Party, got 3.5 percent of the vote.

For attorney general, EG turned out big for Republican Dawson Hodgson (60.7 percent, who has served as most of EG’s state senator for two terms, over incumbent Democrat Peter Kilmartin (39.2 percent).

In the general treasurer race, Republican Ernest Almonte (who had supporters at every polling station) got 52.9 percent to Seth Magaziner’s 47 percent.

For U.S. Senate, even EG’s Republican leaning couldn’t help Mark Zaccaria, who got 39.9 percent of the vote compared to Democrat Jack Reed’s 60.2 percent.