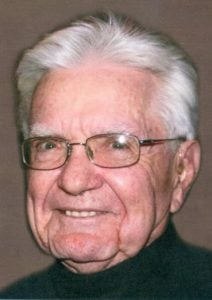 He loved the game of politics.

“Vince Bradley ran one of the best campaigns ever,” recalled Joe Zenga, who was involved in Democratic town politics in the 1970s, ‘80s and ‘90s, “He had had a runner at each polling station to make sure people got out to vote.”

If the runner discovered certain people hadn’t yet voted, Bradley’s campaign would call them up and even offer a ride to the poll if that was necessary.

“He was a first-class setup man for the Democratic Party,” said Zenga.

Bill Sequino, who served as town manager from 1988 to 2013, recalled that Bradley was the Council president who hired him. Sequino said Bradley was fearless when it came to confronting tough issues. And he noted that the people he fought with politically later became good friends, including Republican Bob Holbrook and Al Verrechia.

“Vince was completely devoted to his wife, Helen,” Sequino said. She was very ill for several years before her death. Sequino said Bradley would always stop back at home if he and others were going to go out after a council meeting, to check in and let her know when he’d return.

Bradley was also a champion pool player, Sequino noted. “He would be playing pool down at The Oaks,” a bar on Queen Street.

“He even used to come down the hill for a pool game. Great guy. He will be missed,” she wrote. Patriquin said when she played pool, Bradley tried not to laugh “cause I can’t play,” she said.

“Vince was a throwback to another time,” EG drug counselor Bob Houghtaling said. “He like the deal, he liked the game of politics. He was an incredible character who liked to stir the pot. He was never afraid to say something –sometimes he’d give you a wink just to let you know he was saying something just to instigate something.”

Houghtaling also recalled Bradley’s heroism. Bradley was one of Merrill’s Maruaders, a U.S. Army unit that fought in the China-Burma-India Theater during World War II. The unit traveled through dense jungle behind enemy lines and was known for engaging Japanese forces superior in number. Bradley earned two Bronze Stars.

Before he was elected to Town Council, Bradley piqued the interest of then-Rhode Island Pendulum reporter Mark Thompson. It was 1977 and President Jimmy Carter was planning to hand over control of the Panama Canal to Panama. Bradley was born in the Panama Canal Zone, as it was known then, and spent the first 17 years of his life there. In Thompson’s subsequent article, Bradley talked about how he supported the return and he recalled the “bitter discrimination” by Americans towards the Panamanians. “The canal issue will never be resolved until the Americans living in the Zone learn to treat the Panamanians with dignity, mutual trust, and friendship,” Bradley told Thompson.

Jean Ann Guliano got to know Vince when she ran for East Greenwich School Committee.

“People get into public service for different reasons but Vince genuinely loved the politics. He thrived on it. I met him at the end of his political career here in EG before he moved to West Warwick. When I first got on the School Committee, I would have breakfast with Vince, Carl Hoyer and Bob Holbrook and they would all give me advice and historical perspective on town politics. The ‘City Fathers’ I used to call them. What a treat, as I look back on it.”

She continued, “Vince always had good stories, a great smile and a twinkle in his eye. And, he was always looking forward to the next race!”