In Countersuit, Odeum Corp. Accuses Erinakes Of Conflict of Interest 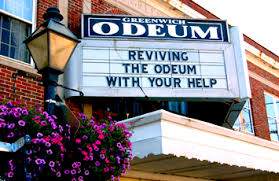 The Odeum Corporation has filed a countersuit against Steven Erinakes – who filed suit against the nonprofit theater in August – claiming Erinakes’s loyalty was divided between his own self-interest and that of the Odeum Corp., an entity he helped to create.

Erinakes, in his suit, claimed the theater has denied his claim of ownership over the building.

At issue is a promissory note for $500,000 given to Blanch Erinakes, Steven’s mother, in 1991, when ownership of the theater building at 59 Main St. was transferred to the Odeum Corp.

Erinakes, who has never collected on the note, argued in his lawsuit the promissory note and mortgage “remain in full force and effect.”

The Erinakes family owned and operated three movie theaters in East Greenwich for several decades in the 1900s, including the Hilltop drive-in on Post Road (where St. Elizabeth’s Home and The Seasons now sit), and the Kent and Greenwich theaters on Main Street. The Greenwich Theater, at 59 Main St., was the last to close, in 1990. After the closure, Erinakes decided to turn the theater into a nonprofit venue for live events.

In its countersuit, the Odeum Corp. alleges:

Erinakes has said he never sought payments on the promissory note because he knew the theater had no money.

Odeum President Kevin Muoio said the board decided to file a countersuit because Erinakes, as a board member from 1991 to 2012, had failed in his fiduciary duty to the Odeum.

“The Greenwich Odeum started to uncover issues with the promissory note a while ago. What appeared to be a simple mortgage transaction between Steve Erinakes and The Greenwich Odeum is anything but simple, “ said Muoio via email.

“I personally wanted to avoid this trouble but Erinakes served us with this lawsuit and we now have to act in good faith for the organization and consistent with our duties as board members,” he said. He noted the board is made up of volunteers.

Muoio conceded the suit and countersuit could cast a pall over the Odeum.

“The last thing the Greenwich Odeum, its supporters and our community needs is any negativity surrounding this East Greenwich landmark. In a year where we are slowly but surely making ground on shoring up the Odeum’s finances and making improvements to the patron and artist experience (such as an extensive acoustics remediation project), this has the potential to be a real diversion,” he said. “But in light of Steve filing the lawsuit our hands are tied and we are required to respond in court…. The actions taken in this lawsuit have been vetted and the board is committed to continue to do the right thing regardless of how difficult it is.”

In particular, Muoio referred to the need to safeguard money that individuals and organizations have donated to the Odeum over the years, including a $142,000 grant from the Champlin Foundations in 2012 and grants from the Town of East Greenwich ($68,676 in total) and the state ($54,00 in total).

According to the countersuit, the Odeum has received more than $600,000 in public and private donations and tax exemptions since its inception.

Attempts to reach Stephan Erinakes for a comment were unsuccessful.