How East Greenwich ‘Flipped the Council’ 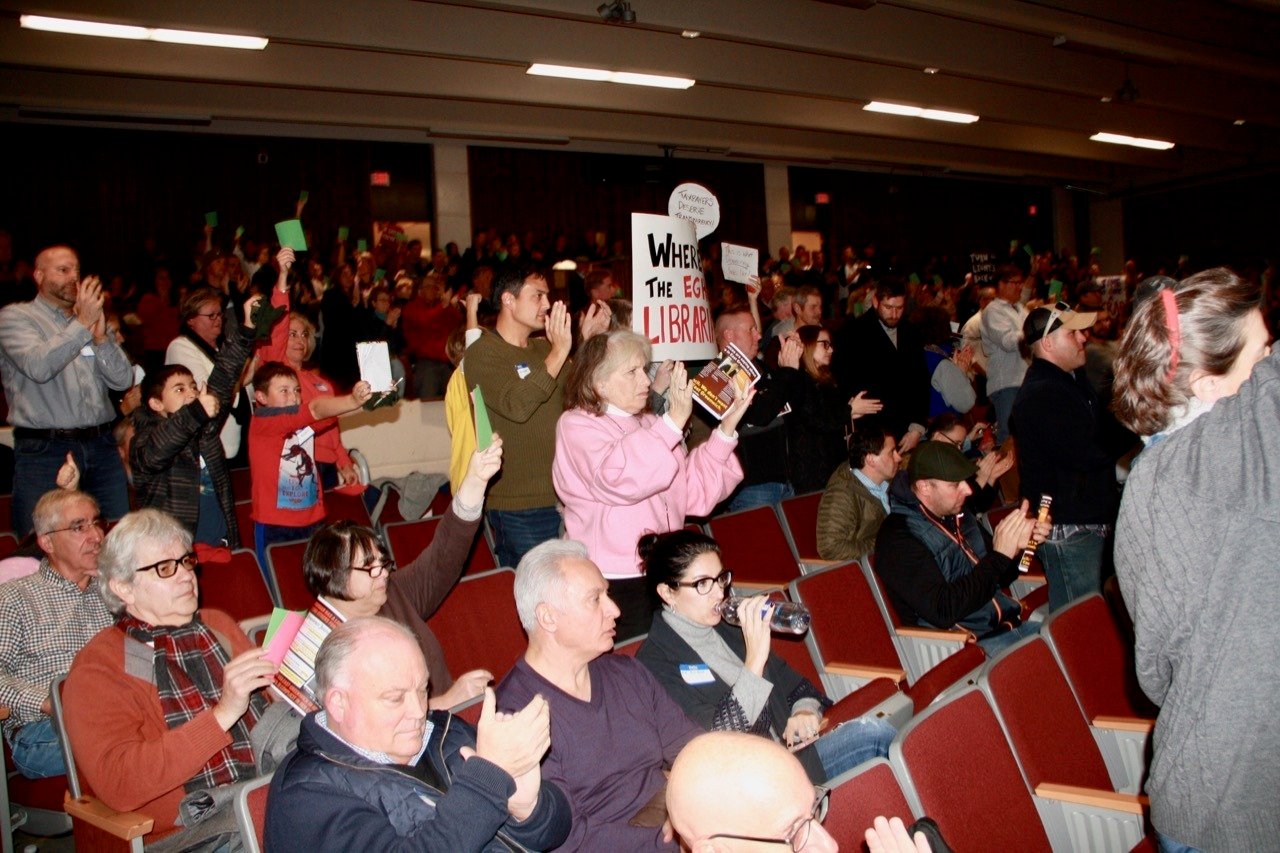 Above: Members of the public at the Town Council meeting at the high school Nov. 20, 2017, show their displeasure as the council prepared to retake a vote to name Gayle Corrigan town manager after her initial appointment was ruled ‘null and void.’

On Monday night, the new Town Council and School Committee members will be sworn in for their respective two-year and four-year terms in a ceremony that will look like previous swearing in ceremonies, with some pomp, speeches and flowers for departing office holders.

But the new Town Council will be made up of five Democrats, something not seen in at least 50 years, if ever. The new School Committee will have five Democrats and two independents – no Republicans at all. Add to that the state representative and state senate elections that went from Republican to Democrat and there has been a sea change in East Greenwich politics.

Even longtime East Greenwich resident Republican Bob Flanders failed to win his hometown in his bid for the U.S. Senate. EG instead went with the incumbent Democrat Sheldon Whitehouse.

The lopsidedness of the results were a surprise to many, including those running for office. Councilors-elect Mike Zarrella and Renu Englehart both said they were surprised by the sweep. Councilman Andy Deutsch, a Republican who lost his bid for re-election, also expressed surprise – he thought he would win.

Mark Schwager, the only Democratic incumbent and the only incumbent to win re-election, also said he was surprised. “I did feel confident that we had a good slate and the community wanted a new direction for the town government. But I thought it was an uphill climb to replace incumbents with newcomers.”

Yet, that’s exactly what happened. How did it come to pass?

The Democrats hadn’t held a council majority since 1994. It hadn’t voted for a Democratic state legislator since Mike Lenihan retired from the state Senate in 2010. But while East Greenwich voted in four Republicans and only one Democrat to the Town Council in 2016, it also voted for Hillary Clinton, as it had for Barack Obama in 2008. In 2012, Mitt Romney narrowly edged Obama in EG. Before 2008, EG voted reliably Republican for years: George Bush in 1988 and 2002, Bob Dole in 2006, then George W. Bush in 2000 and 2004.

So, on a macro level, East Greenwich was turning bluer, but that blue didn’t extend into local races until 2018. Some of that could be the Trump factor. The election of Donald Trump in 2016 galvanized Democrats locally. The party, which had been moribund for more than a decade, suddenly had energized new leadership.

But the election swing could also be due to the public participation factor. Looking back, it’s easy to see the writing on the wall.

Councilman Sean Todd sent out a tweet the day after Trump’s inauguration suggesting the Women’s March that day had been a man’s idea as a “perfect way to get the wives outta the house.” The ensuing uproar thrust Todd and the Town Council into statewide headlines. Though nobody knew it at the time, it was a taste of things to come – small East Greenwich on TV, on the front page of the Providence Journal, on talk radio, and not because of a winning high school sports team.

Attendance at Town Council meetings had been sparse pre-2017. It started to grow in the new year. By May, when the council had hired Providence Analytics (aka Gayle Corrigan and Linda Dykeman) to look first at the schools’ finances and then the town’s, dozens of people were attending council meetings.

Some on the council suggested the people attending the meetings were union members, not residents. Corrigan’s appearance in East Greenwich had alerted the municipal unions – she had built a reputation working in places where union contracts were able to be substantially changed through bankruptcy. And, indeed, union members – some residents, some not – were among those who started regularly attending council meetings. But the large majority of those new attendees were residents who did not work for the town. 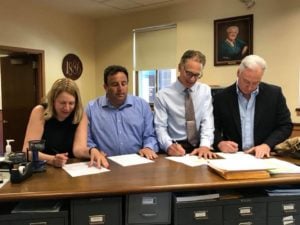 Caryn Corenthal was among them. Corenthal, one of the five Democrats elected to the Town Council earlier this month, said she decided to attend council meetings as a direct result of Trump’s election, responding to outgoing President Barack Obama’s call to those unhappy about the election to get involved locally.

Another resident who started attending meetings was Chris Pels, an independent who said up until 2017 he’d only very loosely followed Town Council actions.

“I started hearing rumblings, a dissatisfaction about what was going on in May 2017. I went to a meeting in May. Sitting there, listening through those initial council meetings, it struck a chord – something didn’t seem right in the way they were governing,” he said. “Over the next eight weeks, things really blew up. There were more and more examples … in my opinion and experience it wasn’t a good governing process, the way decisions were being made.”

“It was not what they were trying to do – their goals of cutting expenses and keeping taxes down,” Pels said of the Town Council. “It was the process,” he said was his objection.

In April 2017, the Town Democratic Committee started streaming the council meetings on Facebook Live, just in time for the tumultuous meetings to come. Not only could people at home follow what was going on as it happened, they could tune in later and watch.

When the Town Council voted 4-1 in June 2017 to cut taxes, the budget also gave the schools less than half what had been requested by the School Committee. That move proved unpopular with many who said they’d moved to town specifically for the schools. Two months later, the high school opened without a librarian – a situation that lasted the entire year. While Town Council President Cienki argued that decision was the School Committee’s alone, residents kept asking the council to do something.

Meanwhile, the dispatch of Town Manager Tom Coyle and Corrigan’s ascendancy (and Corrigan’s business partner’s hire as finance director 10 days later), angered those who liked Coyle and thought he was treated unfairly. Some, like Bill Higgins, said the council’s actions were illegal. Higgins, who went on to run for Town Council as an independent, also filed an ethics complaint against Corrigan citing Dykeman’s hire that the state Ethics Commission found had probable cause. It remains pending.

As Corrigan settled in her new job, the focus of her attention narrowed on the EG firefighters. She set to work building a case against the current firefighter contract (signed in 2016 by three of the members of the current council) as ruinously generous to the firefighters, and she railed against increasing firefighter overtime costs.

She also dismissed the firefighter brother of the union president, an action later reversed in Superior Court, where the Town Council was also found in violation of Open Meetings Act for its hiring of Corrigan. The story – along with a photo of Corrigan – landed above the fold on the front page of the Providence Journal the day after the November ruling.

By now, attendance at council meetings had grown so much the meetings were moved to the larger Swift Community Center. But even that wasn’t big enough for the crowd that turned out in November 2017 for a re-vote on Corrigan’s appointment – which had been rendered “null and void” in that Superior Court decision. With dozens of residents stuck outside in the cold, Cienki cancelled the meeting. When it was finally held in the auditorium at the high school just days before Thanksgiving, there were more than 500 people in attendance, the vast majority of whom did not want to see Corrigan reappointed.

She was re-appointed that night, in a 3-2 vote. That also landed on the front pages and on TV and radio. As did subsequent ethics complaints lodged against Corrigan (in addition to the Higgins complaint, one was filed by Renu Englehart, who also ended up running for Town Council), as well as a lawsuit filed by the town against the firefighters in December.

The town had hired an outside law firm – Whelan, Corrente – in August 2017 to work on labor issues. But legal bills for the work were slow to materialize and when they did (through July 2018, Whelan, Corrente had billed the town $325,000) many residents balked, especially in light of the missing school librarian.

Residents continued to come out for Town Council meetings and to speak during public comment. Members of the council majority, however, said they were hearing mainly only supportive comments from constituents outside of the meetings.

There were a few vocal council supporters on social media and a couple of people wrote supportive letters to the editor. But, come June, Republicans had failed to fill their Town Council slate and hadn’t found a single person to run for School Committee, which had four open seats.

The Democrats, by contrast, had filled both slates, a feat not seen since the early 1990s. And the town committee, headed by Christa Thompson, had been hard at work for more than a year, increasing membership, canvassing voters, recruiting volunteers.

Meanwhile, the Town Council Democratic slate – incumbent Mark Schwager (who’d become the face of the opposition), Mike Donegan, Mike Zarrella, Caryn Corenthal and Renu Englehart – ran as a team, a novelty for the Democrats. They also spent a lot more money than the Republicans, especially Donegan and Schwager. And the Democratic committee raised more than the Republican committee too, including with some money donated by unions, which the GOP said would behold the Democrats.

Come Election Day, the EG Town Democratic Committee rolled out an extensive get-out-the-vote plan, with volunteers at every poll, checking off voters, and other volunteers at hand to rally those who hadn’t yet voted. More than 40 volunteers were involved. The Republican effort didn’t match that.

After the polls closed and the results from the first precinct came in, the course was clear: the five Democrats for Town Council were in the top spots. Subsequent precincts told the same: Schwager, Donegan, Englehart, Zarrella and Corenthal, followed at a comfortable distance by Republican Andy Deutsch. Town Council President Sue Cienki – top vote-getter in 2016 – came in ninth out of ten by two votes.

The scope of the election win did surprise many, But, given the number of angry, frustrated people turning out at Town Council meetings for the past 18 months, maybe it shouldn’t have.