Above: Greenwich Bay on a hot early Aug. 5 morning.

Back in the 1980s, when I was new to the East Coast, during hot New York City summers my future husband Neal would talk about the “good” Canadian air and the “bad” Caribbean air, in an effort to explain the warring weather factions. (You can bet what side he was on!)

Some summers were worse than others – 1988 stands out as a doozy of a hot summer. It was our last in New York City. Well, this summer has been another doozy and, suffice to say, the “bad” Caribbean air appears to be winning, with a touch of desert thrown in. 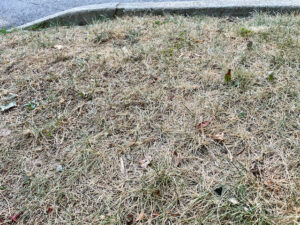 Lawn all dried up.

It’s one thing to be in severe drought, but with the high heat pummeling us for days on end as well, you can almost watch things shrivel up, turn brown and, in some cases, even die in real time. Apologies to all new trees and shrubs planted this past spring – we didn’t do you any favors.

Dept. of Environmental Management’s Lenny Giuliano, meteorologist and atmospheric scientist, started getting worried about dry conditions back in March and April.

“I started noticing we weren’t getting a lot of rain,” he said. “It was sporadic. In May, I thought, uh oh.”

Rainfall in Rhode Island in May was 1.5 inches; the norm is twice that, Giuliano said. June was more normal, with 4.17 inches of rain, then there was July, with just .46 inches of rain.  Thunderstorms don’t help a lot because they are so hit and miss – and by and large they’ve been missing East Greenwich.

Giuliano said one thing that could bring us out of severe drought would be a tropical storm, but of course that kind of rain (and the strong winds that come with it) tends to create its own problems. What we really need are a couple days of sustained light rain that can really soak in, he said.

Rhode Island was in a similar situation in 2020, when large parts of Bleachery Pond dried up. The pond isn’t that dry yet but it’s moving in that direction. One concern with the lack of rain is fire. According to Ben Arnold, principal forest ranger for DEM, fires in Rhode Island can happen at any time of year if the conditions are right. Typically, the state will see fires in the early spring, before there is new plant growth and leaf cover. But there’s a difference between those spring fires and fires in the late summer into fall, Arnold said.

“Spring fires burn surface fuels. Fires now are burning into the organic material in the ground. Sometimes these things will smolder for days.”

He added, “If this drought persists into the fall, that’s when I get really concerned.”

The heat is with us through Tuesday. The temperature is due to come down in the low 80s starting on Wednesday, with thunderstorms a possibility through the week and perhaps even plain old rain on Friday. Fingers crossed.