Above: R.I. Yankee & Zulu Honor Flights at the WWII Memorial Oct. 30. (Photos courtesy of the guardians.)

It may have been 5:30 a.m. on a Saturday morning but T.F. Green Airport was abuzz with activity when 170 veterans and their guardians arrived for their Honor Flights to Washington D.C. Oct. 30. There were bagpipes, an honor guard, and a surprisingly large group of well-wishers on hand to celebrate those who had served in WWII, Korea, and Vietnam.

This was the first such flight since October 2019. Because it had been two years, they combined  two “flights” – Yankee and Zulu (the 25th and 26th such flights from Rhode Island).

Capt. John Romano (USN Ret.), a veteran of all three wars, was accompanied by his son, Jack. At age 96, Romano – a regular in East Greenwich parades – was one of the older veterans on the trip. Jack Romano said the flight accomplished just what it set out to do: “You’re greeted every step of the way…. It really does hit home, this is part of that welcome, that ‘thank you for your service’ that you might not get every day.” 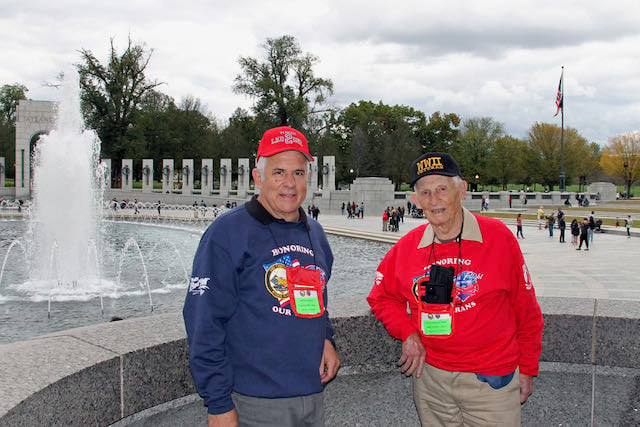 Jack and John Romano (USN Ret.) at the WII Memorial.

Jack said the trip reminded him of a trip to Hawaii he took with his dad in 1991, to commemorate the 50th anniversary of the bombing of Pearl Harbor. Both times, he said, it was an opportunity to hear from the veterans themselves about their experiences. That was especially poignant regarding the WWII veterans as their numbers dwindle with each passing year.

East Greenwich resident John Pierson has served as a guardian on five Honor Flights. As a retired North Kingstown deputy fire chief, Pierson got involved through the R.I. Association of Fire Chiefs.

“It’s rewarding to be able to give the veterans who’ve never had a chance to go to Washington to see their monument,” he said. On this most recent trip, Pierson was guardian for Bob Bernard of West Greenwich.

“My task is to make it a good day for them,” he said, noting the weeks of preparation that all culminate in one – long – day. The veterans and guardians start the day at 4 a.m. and don’t touch down back in Rhode Island until 11 p.m.

But for so many of the veterans, this is the one chance they have to see the memorials for the war or wars they were involved in.

For veteran John Holmes (Army 1SG), who served during the Vietnam War, it was getting to visit Arlington Cemetery and the Tomb of the Unknown Soldier that meant the most to him.

“To visit the hallowed grounds of Arlington and just to stand before the Tomb of the Unknown is a feeling like no other,” he said. “It took me longer than it should have and I am eternally grateful to Leigh for making it possible. To say I was humbled by the experience is putting it mildly.” 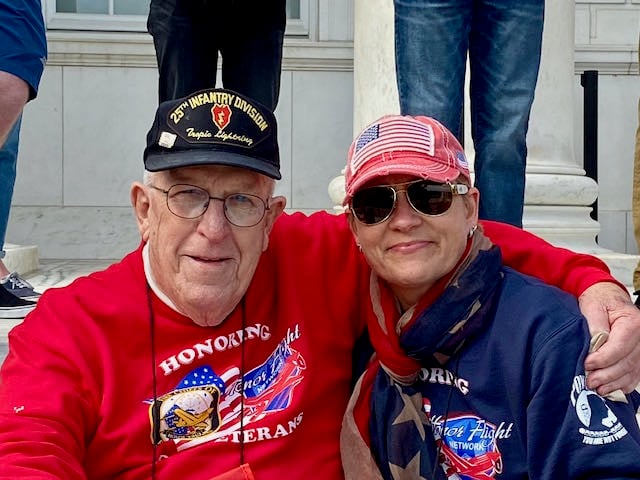 He was referring to his guardian for the trip, EG Town Clerk Leigh Carney. The two got to know each other after years of working together on the town’s Memorial and Veterans Day parades.

“I’ve always had a great sense of pride in our country,” said Carney. The parades have been one way to exemplify that. Serving as an Honor Flight guardian was another. “These veterans are aging and they are due our respect,” she said.

Carney and all the other guardians handle the preparations and the logistics for the day and they stay close by their veteran at all times.

Carney said there were several moments during the day when she and Holmes were moved to tears by what they were experiencing. At the Tomb of the Unknown Soldier, they were able to watch the solemn changing of the guard ceremony and then two 101-year-old veterans from the Rhode Island group laid a wreath.

“It was just so special,” she said.

The schedule for the day is packed – so much so they eat a box lunch on the bus. But at the end of the tour, they have a banquet dinner complete with what’s called the “last mail call.” One of the things the guardians do in preparation is ask family members and friends of the veterans to write letters to their veteran. The letters are delivered to the veterans to be savored there and on the trip home, another special memory from a very special day.

“It  was a great honor to be selected to go on an Honor Flight and associate with fellow veterans,” said Holmes. “The Fire Chiefs Association does a wonderful job on these trips. Everything is taken care of. They are so caring, I can not thank them enough.”

You can find out more about the Rhode Island Honor Flights HERE.