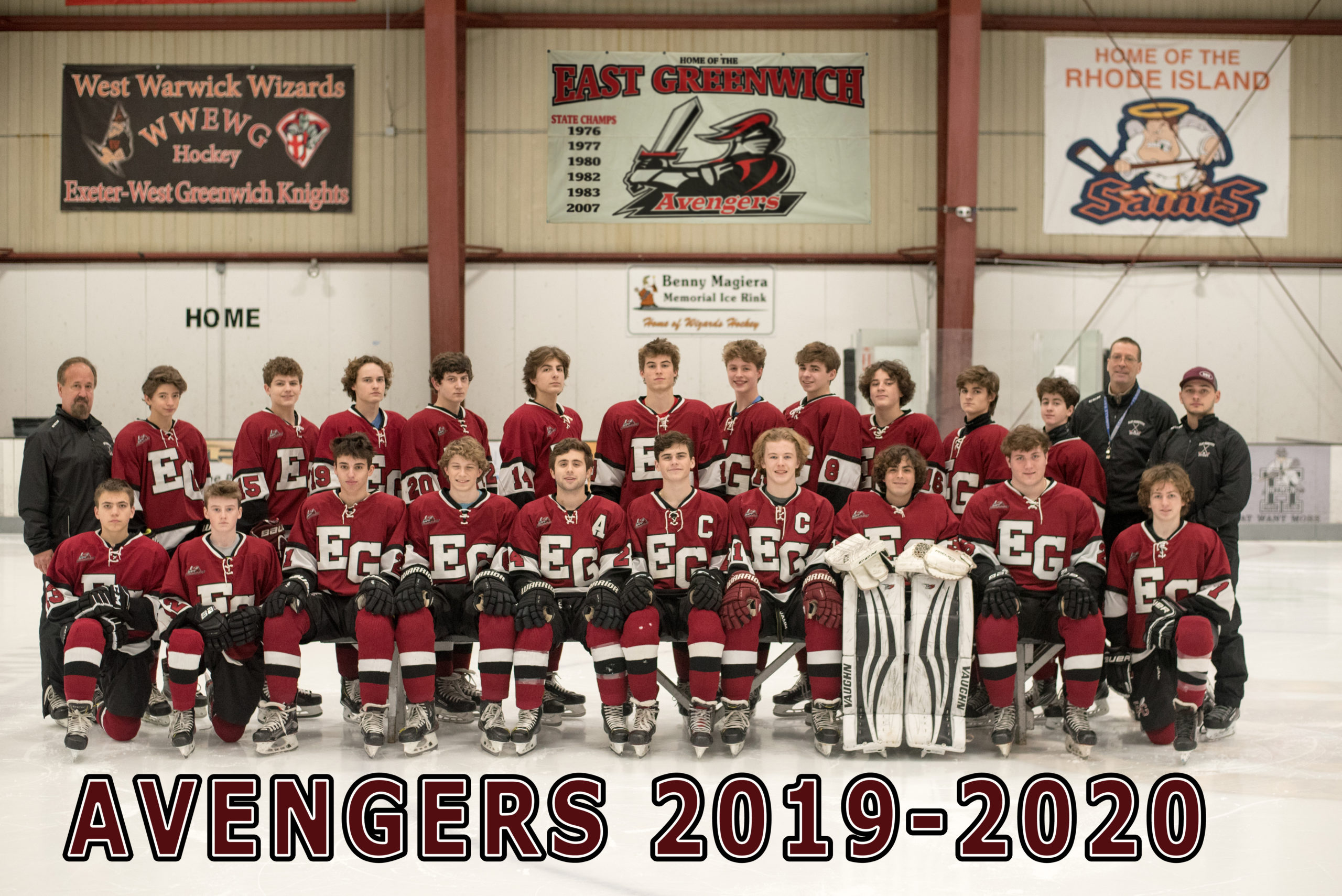 Conrad Swanson and Nick Sanzi, the seniors on this year’s Boys Hockey team.

It was only a week ago, although now it feels like a lot longer, the EG Boys Hockey team was set to play South Kingstown in the state championship. It was going to be the team’s first time in the championship since 2007. But then everything changed.

Just hours before the start of Game One, the Rhode Island Interscholastic League made the difficult decision to cancel all remaining winter sports tournaments because of the increasing threat of the coronavirus COVID-19. The news of the cancellation came as a shock to everyone, especially the team itself.

“I texted the team, ‘Our season is over.’ The only contact I’ve had with the team is communicating through texting,” he said.

Understandably, the team has been pretty upset about the cancellation, especially after all the effort they put in this season.

“Cancelling the game was really unfortunate because we had worked so hard to get to where we were,” said team member Dan Madden.

While the news has been hard for the team to grasp, the players understand why the game had to be cancelled.

“It’s sad it had to end this way. We’ve all dreamed about winning it all but we understand it had to be done for the safety of everyone involved and our communities,” said Spencer Hallagan.

The cancellation has been especially tough for the seniors on the team, Nick Sanzi and Conrad Swanson, who spent four years on the team and had hoped to cap it off with a championship.

“It’s a real shame we didn’t get to finish off the season on our terms. Conrad and I went from at one point, in our freshman year, going 0-18, to being undefeated in the playoffs, only to have our last series taken away,” said Sanzi. “While we understand the necessary safety precautions that were taken, it just would have been nice to play it through, even if that meant playing with no fans.”

Coach Dunwoody has encouraged the team to look at this in a positive way.

“We had a great season. We had a short end. I thought the team performed greatly,” said Dunwoody. “We have good communication, great skills, and a desire to be better every game. It only motivates us to win next year, without the virus.”

Dunwoody is proud of how hard the team has worked this season. “I’m very happy to be part of the program. It’s a great team to be involved in. They’ve done a great job being a team that the middle school looks up to.”

The younger players are looking forward to competing next year.

Jake Barron said, “Next season we’re using this as a rallying point. Everyone wanted a ring, we outworked every team this year, and to have it stolen straight from our fingers only makes us want it more.”

THE EAST GREENWICH GIRLS AND BOYS BASKETBALL TEAMS each went into last Thursday night with a game to play. Falling short in the Division playoffs, both teams had made it to the state tournament, which in itself is a notable achievement. Thursday marked the beginning of the tournament and an exciting opportunity for both teams to prove themselves. Winning was not certain, but the games seemed to be a concrete opportunity to advance further into the tournament.

The 14-seed girls team played 3-seeded Scituate. The game was fast-paced, with Scituate leading but East Greenwich intermittently closing the gap with some important runs. Scituate secured the victory with a final score of 53-44. East Greenwich’s top scorers were Skyler Sullivan with 13 points, Alex Mega with 10 points and Sofia Bianco with 7 points.

The girls team worked hard to reach this point and while they are disappointed with the outcome of the game, they feel proud of their 9-9 season and the success they experienced this year. Also on Thursday night, the boys team went up against 3-seeded Mount Pleasant away.

“We had a great week of preparation and that carried over to the game,” said Coach Don Bowen.

Although Mount Pleasant had not lost at home all year, East Greenwich played a great game and won their first state tournament game ever. The team was led by Jack Mcmullen with 23 points and 9 rebounds, Roman Gloria with 17 points and Danny Prior with 12 points. Coach Bowen stated that the win was “a total team effort.”

Unfortunately, the boys team was not able to ride this momentum to the next state tournament game for the same reason the hockey finals were cancelled: COVID-19.

The season cancellation was hard for the team to accept, especially for the senior players, although Coach Bowen said it was “the right decision.” He remains “so proud of this team and what they have accomplished.”

“It’s extremely disappointing that my senior season got cut short, considering the fact I’ll never be able to suit up in an Avenger uniform ever again,” said senior co-captain Mason Minghella. “The season was full of ups and downs and right when I felt like this team was playing with our full potential, the season ended. I’m sad to say that the season is over, but the experiences and memories made with this team will be something I never forget.”

While the girls team was not set to advance to the next stage of the tournament, the players felt sympathy for the teams that had earned the right to do so. Senior captain Brenda McKinney says:

“We came from barely making the playoffs to making the open tournament which was really great. As far as the tournaments being cancelled, it was very sad for not only the girls basketball teams but for all other sports teams too. Everyone’s hard work and dedication got cut short. It’s just really sad because for some of us, it will have been the last time we got to play our sport.”

If you are interested in writing for EG News, even just the occasional story, we’d love to talk! Contact [email protected]