The School Committee rearranged its agenda Tuesday night to accommodate those who had come to hear – and speak – about changes to the bus system, allowing that subject to be heard first. Committee members heard from several parents, one student and one teacher, all of whom encouraged the committee to come up with a solution to students in the Hill & Harbor neighborhoods having to walk up to 1.5 miles to Cole Middle School, especially during the winter months.

“We have valid concerns about the safety of our kids,” said Beth Gibson, parent of a Cole 7th grader. Gibson said she was speaking for many in her neighborhood who wanted the so-called “CVS bus” restored for Cole students. She expressed frustration that no one from the Hill & Harbor area was part of the transportation subcommittee and she questioned whether safety was the committee’s primary concern. School Committee member Jeff Dronzek, who heads the transportation subcommittee, had said safety was a big concern during his opening remarks. But, the changes to the bus system this year have saved the district as much as $200,000. And, Dronzek noted, as difficult as it might be to say, it was not the school department’s job to get students to school who live within a “practicable” distance.

Ironically, noted School Committee Chairwoman Carolyn Mark, “we have actually reduced the walking radiuses this year for most of the schools, however we are enforcing those walking radiuses perhaps in a way they had never been enforced before. Some people are finding themselves as walkers where they have received a bus in the past.”

The distance allowed in East Greenwich before a student must be bused is 1.5 miles for Cole and 1.75 miles for EGHS.

School Committee member Mary Ellen Winters expressed a worry that the lack of bus transportation might lead to higher truancy rates among the students living near Main Street.

“I guess I want somebody to tell me that they’re going to watch those numbers and those kids if they don’t get to school and there’s more truancy because there’s no bus,” said Winters.

“If we get to the point where we’re losing kids, then we may need to add a bus,” said Dronzek. “Mr. Mong [the truancy officer] came to our meetings and he said he was going to watch this. His thought was, ‘Let’s see what happens.’”

“Decisions can be adjusted if they have to be during the school year,” he said. “The committee’s not going away.”

“I believe that it’s been suggested that although on its face our policy might be fine, there’s a disparate impact in the application of our policy on those folks who live near Main Street. It’s been alleged that it’s discriminating against a protected class,” he said, noting the class would be lower socio-economic. “With allegations like that, it’s my suggestion that we involve our legal counsel immediately.”

Mark agreed and said Oliverio would be alerted. 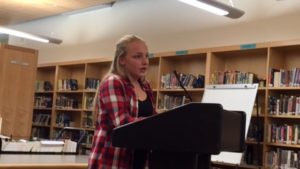 Evelyn Clement, Cole 8th grader, speaks about the importance of a bus for the Hill & Harbor neighborhood at Tuesday night’s School Committee meeting.

Eighth grader Evelyn Clement said the sidewalk on certain stretches of the walk from Cole offered little barrier from cars driving on the street and, with snow, the sidewalk would be that much more treacherous.

Cole teacher Elise Wolff, who happens to live near the school, said she has walked the distance between Cole and downtown many times, then asked the committee, “Who has walked the one and a half miles?”

She added, “If you’ve walked it, can you say in all road conditions it’s safe for children?”

The challenge for the School Committee is that each additional bus costs $75,000. There is a bus that stops at CVS to pick up high school students but Dronzek said that bus is near to capacity, so there’s not enough room for the Cole students. Instead, it would require adding a bus.

“If we add a bus there, what do we do with the other parts of town” where there’s a longer walk, he asked.

In the end, it may come down to money, or the lack of it.

“I think we’d rather have a librarian at the high school than another bus, but right now, we don’t have either,” Dronzek said.

“Some decisions are not going to be liked … but you can rest assured that each one of them has been vetted really carefully, down to each stop,” he said. “And we’ve made some mistakes and we’ll change them.”