Helping Rhode Island, One Hand Sanitizer at a Time 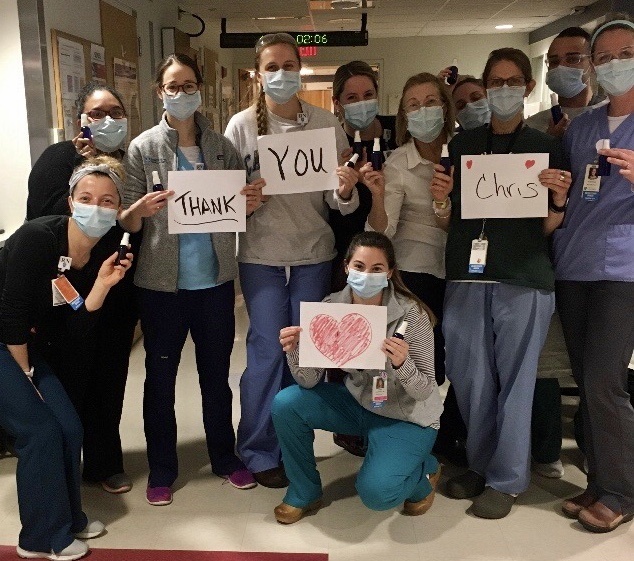 Above: Staff from Massachusetts General say thanks to Chris Lamendola and Stone Essentials for hand sanitizer.

If you know anything about Chris Lamendola, it’s that he doesn’t stop. In his  days at EGHS (Class of 1979), you could see that on the football field and basketball court. Coaching his kids’ basketball teams, he was “The Voice,” always urging his players on. Need to get something done around the house or in the yard – make sure Chris is on your team. When it comes to his family – well, do not mess with his family. In particular, he was a fierce protector of his son, Nicholas, who died in 2005 of Alexander disease, a very rare degenerative illness. He was 9.

So, perhaps it’s not surprising that the global coronavirus pandemic spurred him into protective action. As he describes it, he and other family members were talking about the shortage of hand sanitizer when his daughter, Katie Lamendola Perez, a nurse at South County Hospital, asked him to make her some.

Lamendola realized quickly he could, and should.

He and his four brothers (Richard, Steven, Scott and James) and brother-in-law Erik Oberg all work for CalChem, a chemical company in Coventry started by Chris’s dad, Charles, who also still works there. A few years ago, they started  Stone Essentials, a sister company, that provides products to seal stone like granite used for countertops.

“I talked to my father and my brothers and we decided to do it,” he said. “God’s been very good to us, as my father said.”

“It was pretty easy for us to take one of our reactors and turn it into making hand sanitizer,” said Chris. It helped, too, that the company already had the needed isopropyl alcohol on hand. When it came to thickener – something to turn the sanitizer into a gel – they were out of luck. Supplies were sold out.

No worries. “We did it in liquid form,” and used some small atomizer bottles they already owned.

“You just don’t do this anywhere,” he said. “It’s easy for us. We have the equipment.”

The orders started rolling in. First it was a couple of EG police officers who mentioned the station could use hand sanitizer. Almost immediately, Chris dropped off 150 of the 2 oz. bottles, plus an extra jug to refill them. Then he talked to Bob Houghtaling, who works for the town, and suddenly, he was bringing hundreds over to Town Hall, to EGFD, to the EG School Department. They were even distributed to residents of Shoreside, an EG Housing Authority property. All for free.

EGPD was among the first recipients of Stone Essentials hand sanitizer bottles.

But the Lamendola family’s generosity did not end there. So far, the company has turned out more than 5,000 of the small bottles, and lots of refill gallons (the small bottles should be saved and refilled if possible because they are in short supply).

The other day, Chris got a call from someone he knew at Mass General saying they needed some there.

“You’re going to tell me Mass General Hospital is in need of PPE?” he remembers thinking. He brought a few gallons to a rest stop in Hopkinton, Mass., and met the woman there for the handoff.

Normally, a company like Stone Essentials would not just one day be able to start turning out hand sanitizer.

The Lamendolas gave hand sanitizer to the R.I. State Police.

“We were able to do this because President Trump got rid of the regulations,” Chris explained. Usually they would have needed FDA approval, a process that could take months. Instead, because of the grave health emergency caused by COVID-19, the FDA only gave guidance on how to make the sanitizer. The mix is 75 percent isopropyl alcohol, 1.5 percent glycerin, distilled water, and hydrogen peroxide. It helps, of course, that the Lamendolas are accustomed to handling chemicals. “We’re going to keep making it until I run out of raw materials,” Chris said. That’s a possibility – ingredients remain scarce. “We’re giving it away and we think that’s the right thing to do,” he said.

Most recently, Chris got in touch with one of the respiratory therapists from Hasbro Children’s Hospital to see if they could use some of the hand sanitizer.

“Making a donation to Hasbro, that’s very, very sentimental to Sue and I,” he said. Their son Nicholas spent a lot of time there.