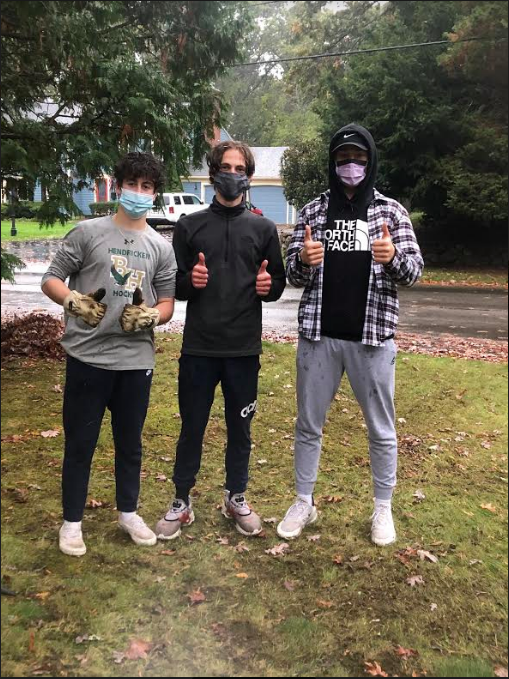 Above: Corey Szabo, Matt Marcaccio, and Jack Farrelly after a cleanup.

Two years ago, Corey Szabo, now a senior at EGHS, was diagnosed with Type 1 diabetes, a genetic condition that causes the pancreas to produce insufficient insulin which can lead to life-threatening complications. With no known cure, patients need to constantly monitor their blood sugar levels to stay healthy. 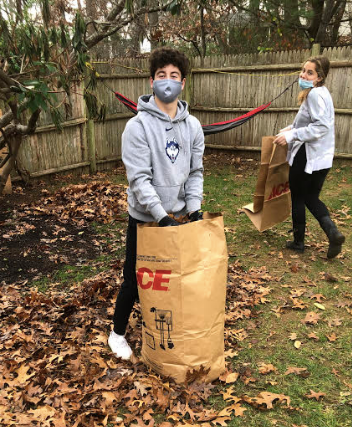 Corey Szabo and Jillian Prior during a fall cleanup.

With the help of classmate Matt Marcaccio, Szabo decided to make the best of his situation. The duo created Help for Help, a club at EGHS that raises money for the Joslin Diabetes Center in Boston by organizing car washes, yard clean-ups, and other odd jobs.

“I didn’t know anything about it before I got diagnosed,” Corey said of the disease. “It was difficult at first regulating blood sugar and stuff like that. There’s a lot of different things that go into it like carb counting, hospital visits, and training. But I felt like I wanted to start something that could give back a little bit, and Matt had this awesome idea to start this club.”

In their sophomore years, Matt and Corey started the club as a nonprofit organization with help from a group of eight friends. From there they began to expand into a school-wide club their junior year.

“What we wanted to do was rake leaves, wash cars, and other little things around East Greenwich, get some money from it, and donate it to Joslin Diabetes Center,” said Matt. “We’ve taken off since then, we started the club our junior year, got about 50 members from that, and they all joined our nonprofit organization. Now we have about 130 members, so it kinda exploded, and now we’re able to do things regularly in the community.”

So far, the club has raised more than $5,000 through their work. All the funds are sent to Joslin, one of the nation’s largest centers for diabetes research as well as care for people living with diabetes.

This school year is seeing a shift for the club. After organizing a host of fall clean ups with the group, Matt and Corey are now beginning to meet with underclassmen to make sure the club is in good hands when they graduate. Both students take pride in the impact they’ve had on the community and they hope that the club doesn’t lose touch with it in the future.

“We’re going to have a transitional period where we have a new board take over because we’re both seniors, as is the rest of the board,” said Marcaccio. “We’ll hold their hands for the first few months but after that it’s their operation.”

For Szabo, being diagnosed with diabetes has not been easy, but there have been some silver linings.

“I think it made me more mature in a way. It’s helped me stay more organized, keep track of things, and I think it actually had its benefits because of this club,” he said. “You can always make something good out of a bad situation.”

Community members are welcome to reach out to the club via their facebook page: https://www.facebook.com/eghelpforhelp/

Morgan Walsh, a junior at EGHS, has been writing for East Greenwich News since 2020.