‘Happy’ Tribute to Grandma Betty Is EG Made 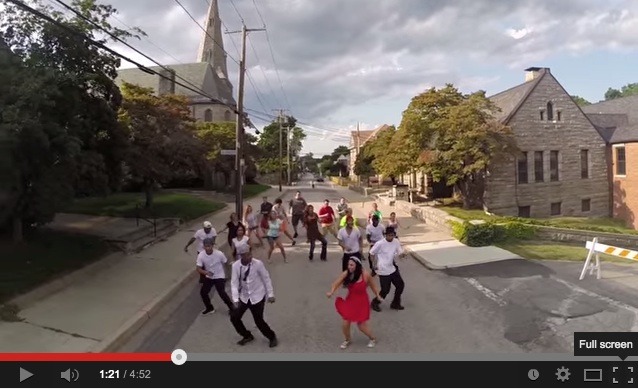 EG’s Bianca Sperduti first heard about Grandma Betty in March, back when the elderly woman’s Instagram account had a mere 4,000 followers. Betty’s grandson had set it up for her after she was diagnosed with terminal cancer but simply refused to get down about it. He took pictures of his grandma and shot videos, including one where she danced to Pharrell Williams’s contagiously uplifting “Happy.”

That video caught Williams’s attention. He shared it with his bazillion Instagram followers and suddenly, the 80-year-old from Indiana had hundreds of thousands of followers of her own (667,375 at last count).

Sperduti learned of Grandma Betty in March and was taken by the older woman’s positive attitude and faith. She was equally awed by the family who shared their grandmother with the world.

“Her family was still behind the curtain, mourning,” she said. “I wanted to write them a card – to do something for them because they’ve done so much for the world. I got my stationary out but God told me to make a video.”

Sperduti’s studying physics at URI, but her passion is singing and performing (spoiler alert for no one who knows her).

“I just knew that I wanted to make it happen but I didn’t know how,” she said. “I talked to my dancer friends and I talked to Neil. He ended up going a million miles beyond what I thought he was going to do.”

She was referring to videographer Neil Guliano, another member of the EGHS Class of 2011.

Sperduti got her singing buddy, Rodda J, involved too.

From there, the project just came together. Guliano got permission from EG police to use Peirce Street for the shoot. Main Street pizza restaurants Frank & John’s and Filippos both donated pies for the participants. St. Luke’s Church let them practice in their dining room. The song itself was mixed and mastered at Emerson Torrey’s studio, also here in EG.

Sperduti invited people to show up Aug. 10 at 4 p.m. and they did – including former classmates and Sperduti’s favorite high school chem teacher, Celia Schnacky.

The result – here’s the link: https://www.youtube.com/watch?v=6jb5aFrYKU8 – is a message of love to Grandma Betty’s family. Betty died Aug. 2, just days before the video was shot. Now it’s time for Sperduti to settle down to the books for one final year, with her music projects on the back burner.

“I know that God called me to sing and he gave me this voice for a reason, but I think that I need to still grow in myself,” she said.