Hanging Out & Reaching Out: Bob Houghtaling’s Approach to Helping Our Kids 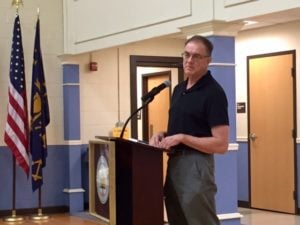 Bob Houghtaling, director of the town’s drug program, talks about his program at the Town Council meeting Monday night.

When the town hired Bob Houghtaling to be the director of its drug program in 1983 – 34, yes 34 years ago – the big issue was teen drinking. While teens still like to drink alcohol, Houghtaling’s job over the years has shifted to include include both illegal and prescription drug abuse as well as anxiety problems. His report to the Town Council Monday night outlined last year’s statistics but included his job philosophy  – get to know the kids and be a regular part of their life so if or when there’s a problem, they have somewhere to turn for help.

That’s why Houghtaling positions himself at the top of the ramp just outside the East Greenwich High School cafeteria every day at lunchtime. To all the world, he’s just a guy hanging out, chatting and laughing. But there is a method to his “leisure”: he stands there so he will see every student as they pass by on their way to or from lunch.

“I put in a tremendous amount of time ‘hanging out,’” he said Monday.

Actually, Houghtaling does a lot more than hanging out.

His report – which you can find here – includes statistics on his case load the past year, but also the wide variety of activities, initiatives and groups he runs, everything from a local chapter of the national Youth-to-Youth organization and a Civic Action Club to helping out with AfterProm and Safety Town to serving as a liaison to the Juvenile Hearing Board and Citizens Who Care.

The myriad clubs he runs at the high school? “Don’t tell anyone, but they’re all the same club,” Houghtaling confided, “the adolescent angst club.” They each provide a place for kids to talk and to listen to others. That’s important, Houghtaling said, especially now, with kids focused more on their phones than on the people around them.

“It’s a national epidemic and unfortunately it’s come home,” he said. “We’re going to need the help of the entire community,”

To that end, Houghtaling organized three forums on opioids last year and has another one in just a couple of weeks – “Four Legs to Stand On,” on Sept. 14.

Houghtaling’s job title may be director of the town’s drug program but for him it’s more elemental.

“I try to find as many ways possible to make the young people in the community be safe so they can grow up to become adults.”