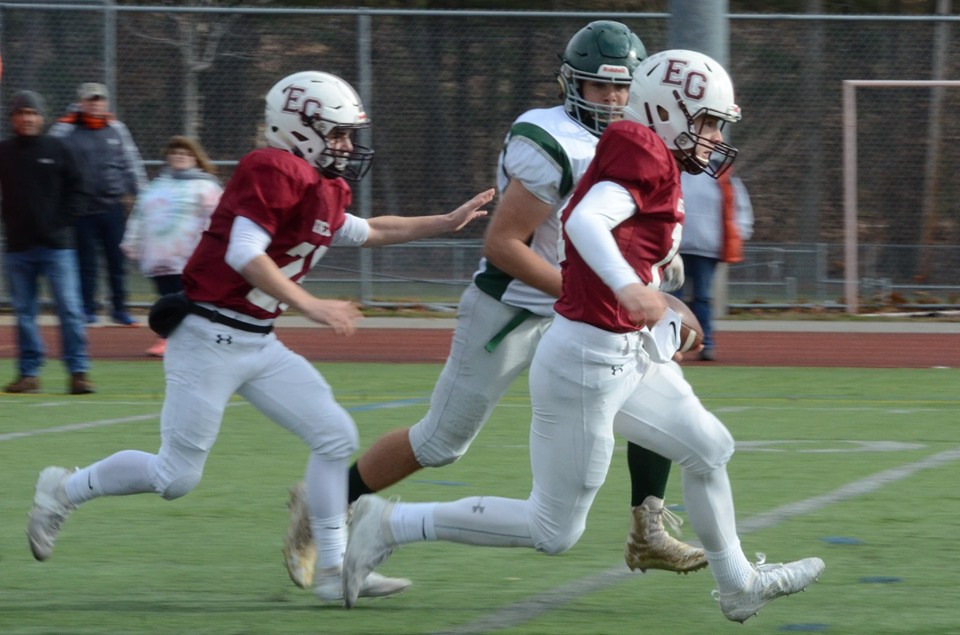 EG’s Conrad Swanson among those to be honored

The Providence Gridiron Club’s Annual Awards Night in April was cancelled due to the coronavirus pandemic. The event, the biggest on the club’s calendar, and normally attracting a crowd of 300, continuously saw honors given out to the outstanding coaches, players, officials and administrators of the state’s high school football programs. It culminated with the naming of the PGC’s choice for the Rhode Island High School Football Player of the Year, who was awarded the prestigious Gilbane Trophy.

Along with that was the announcing of the Coach of the Year in the state, plus each of the football divisions; the Back and Lineman of the Year for the same; the Officials Award and others, including the Pride Of Rhode Island Award given to a home grown college star making his mark out of state and the Home State Hero Award given to a RIHS product standing out at an in-state football playing university.

When the banquet was scrapped, things looked forlorn for the club, which has been promoting football in the state since 1945.

But, the club never gave up on doing something, despite setback after setback, and this week they are holding an abbreviated ceremony and photo op session Wednesday, July 29, at 6 p.m. at the Cranston Country Club. Coaches, officials, family and friends of the award winners are all invited to attend. There will be no dinner, but beverages may be purchased and attendees are invited to partake in visiting and fellowship after the ceremony.

The club is still trying to formulate plans to hold its annual golf tournament in order to raise funds to continue its operations and would like to thank Washington Trust Bank for its sponsorship over the last few years. The club’s hefty agenda usually entails hosting five dinners a year, normally at the Quonset O Club. They start with a Leadership Night to kick off the football season; a Hall of Fame Night and Hall of Fame Brunch; Most Valuable Player Night, where the top two players of all 44 football playing high schools are honored; a Super Bowl Night, honoring the teams and coaches playing in the championship games, and, of course, the Annual Awards Night.

With the threat of the coronavirus hovering over their heads, many of the nation’s collegiate football programs are cancelling their seasons. Some are holding out some hope that they might be able to resurrect a schedule in the spring, some are even thinking a late September or early October start might salvage their seasons. It is all up in the air. 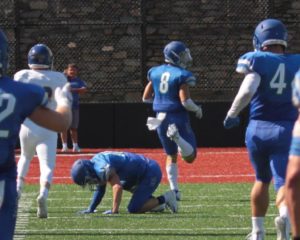 The cancellation of the 2020 football season will be affecting quite a few of our local gridders right here in East Greenwich, several of whom have been making their mark on the collegiate gridiron, and others who were hoping to crack their college’s lineups this fall.

One of the most affected would be Salve Regina’s blossoming star, Matt Sylvia, who in three years has carved out a standout career for the Seahawks. Matt, who has been named All Conference, All New England and All East was looking to continue that success this fall. He may still get a chance if Salve’s Commonwealth Coast Conference opts to run their football schedule in the spring.

Joining Matt on the Salve roster will be former Avenger teammate, Ted Ladas, who has transferred from Sacred Heart and is looking to grab a line position for the Seahawks.

At Holy Cross, Cristos Argys was hoping to rebound from an injury laden 2019 season and come closer to his Frosh year’s performance, which saw him register 12 tackles, 10 solo, two for loss and two fumble recoveries with a highlight reel return of a blocked kick for a TD against Boston College. Argys is from East Greenwich but played his high school ball at Moses Brown.

Nolan Cooney is looking to be the starting kicker at Syracuse this fall, and it looks like the ACC is going ahead with their season as of this writing. Cooney has made the ACC Honor Roll and the Syracuse AD Honor Roll. In 2018 he appeared in every game as the holder for PAT’s and FG’s as his kicker booted 30 FG’s and was 61 for 61 on PAT’s. In 2019 Cooney received the Jim DaRin Courage Award and got to kick off in 3 games, while again performing his holding duties. This year he is slated to be the kickoff man for the Orangemen.

Former EG resident Harrison Leonard is fighting for the kicking job for the Fighting Irish of Notre Dame as they also try to go on with their 2020 pigskin season.

The Licciardi brothers, Kevin and Matt, at Catholic University and Endicott, will be sidelined for now as each is hoping to show enough to crack the lineups at their respective schools. Chances are they may play in the spring for their D3 schools.

Former Avenger Conrad Swanson, who was just slinging the ball all over the field for the Crimson & White last fall, will also have to wait to strut his stuff for the Western New England Golden Bears. They too may shift their season to the spring, so hopefully, not all will be lost.

Naturally, the first job of the college is to keep students safe. Here’s hoping once that is accomplished our EG players can, once again, don the pads, put forth the effort, and do the hometown proud as they continue on to future success.