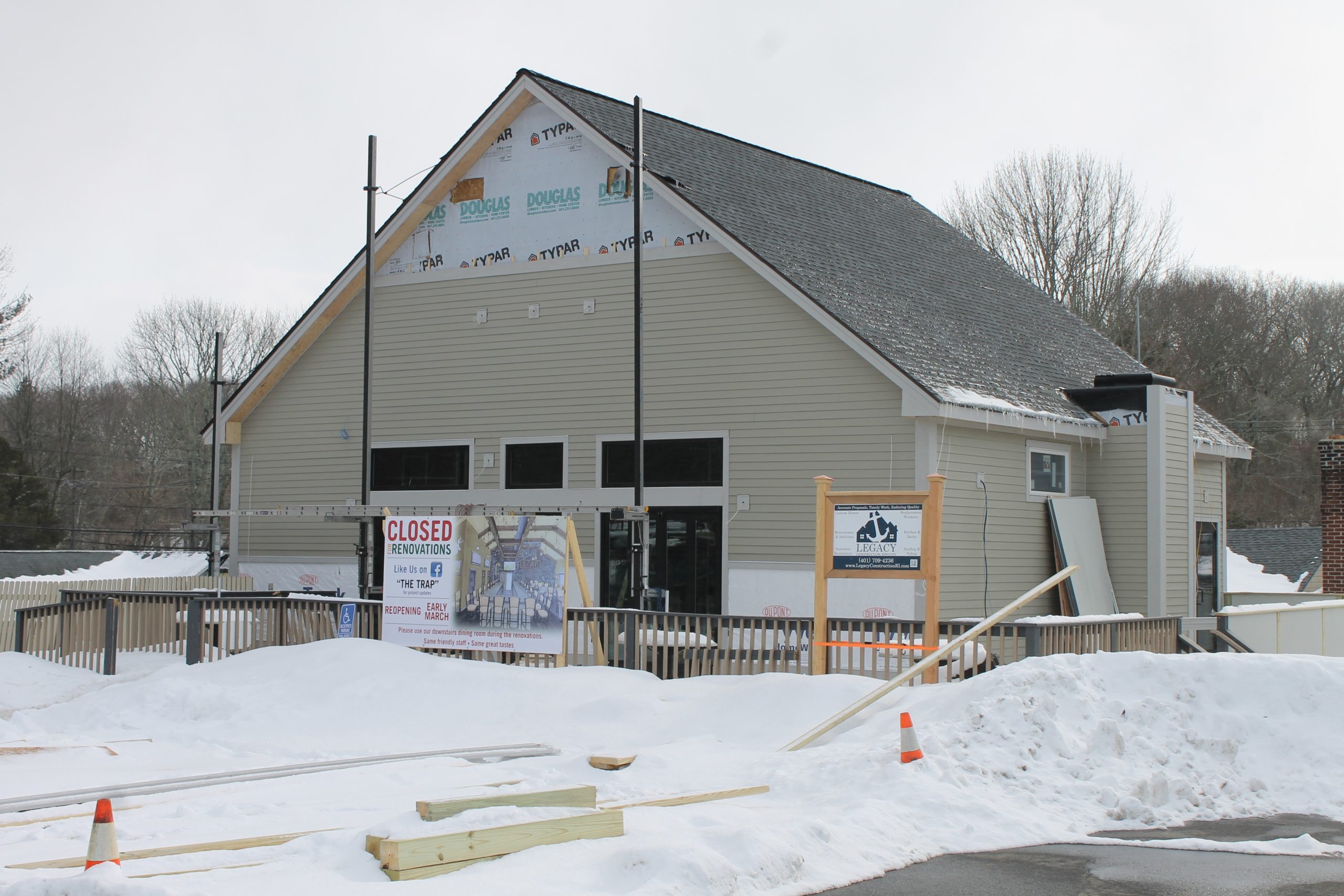 TJ Martucci hopes to entrap his current customers and new ones at The Trap, his new pub that literally rises where the popular Parkside restaurant once stood.

Carpenters hammered nails and wall plasterers worked their hawks silently during a quick check in on Thursday, Feb. 19 by Martucci, who owns the soon to open “Trap” now under construction and Chianti restaurant on the first floor of the building at 195 Old Forge Road.

“The customers are like a family and they loved the cozy feel and the knotty pine of the Parkside,” Martucci said. “They were all asking me, ‘Why are you touching it all?’ I think they deserve a better place and that is what I am trying to give them.”

In other words, if you loved the atmosphere and the food at the Parkside, you will get more of both next month when The Trap opens its doors, hopefully in time for St. Patrick’s Day.

“I bought the restaurant 10 years ago and we have a reputation for great service and good food; our customers and waitstaff are like a big family,” Martucci said. “It is an eclectic group of people. I owed it to my customers to give them a nicer atmosphere.”

The Parkside was run down and needed renovation, he explained. Now it’s getting a complete rehabilitation.

The ceilings were pulled down and the restaurant was ripped out to the wall studs. The new ceiling is 17 feet high, the walls have all been replaced and one side has floor to ceiling windows and sliders that open to a new L-shaped deck. Seating in the pub will be 55, including at the bar, Martucci said.

Six, 75-inch televisions with a new sound system will make The Trap a prime destination to watch games from March Madness right through the college football and NFL seasons.

“By purposely not making this a sports bar we are making a different kind of pub destination,” Martucci said.

The interior of The Trap Pub at 195 Old Forge Road will feature a rustic stye. including old barn boards for the ceiling.

He said he’s aiming for a rustic feel for the new pub. He is using wood recovered from an old barn and other dismantled older buildings for the walls and ceiling. Mixed industrial fixtures and lighting will be installed.

“We will have a bar like no other in the West Bay,” Martucci said.

Chianti’s remains open during the reconstruction upstairs and its menu will continue in the Trap with the addition of pub food like panini, a variety of hamburgers, and homemade pizza.

“The Trap will be a place were you can come in your shorts and flip flops and have a gourmet meal or build your own 8-ounce hamburger,” he said. “On Mondays we’ll have specials on hot dogs and pasta; Tuesdays, pizza specials; Thursdays, wing night; and build-your-own hamburger on Thursdays.

Customers can bring their dogs with them and order a meal and drinks on the deck. The pub is lining up a supplier for gourmet dog treats, so a pooch won’t need to mooch off his master’s plate.

“We’ll have a ‘yappy hour’ on Thursdays on the patio,” Martucci said.

Martucci’s roots are deep in the restaurant business. His father, Vincent, owned a restaurant in Cranston where Martucci started washing dishes at 8 years old. After a career as a business executive, Martucci left Hasbro Corp. two years ago in keeping with the same philosophy that led him to form the Martucci Restaurant Group in 2004.

“You have to keep reinventing yourself,” Martucci said.

The reinvention that is producing the pub is also a nod to the past. The restaurant at one time was called the Sand Trap because it was an easy stop after a day on the links nearby.

The Trap will have live music and Martucci hopes will be the place that diners from the Main Street restaurants head to for drinks on the deck on warm summer evenings.