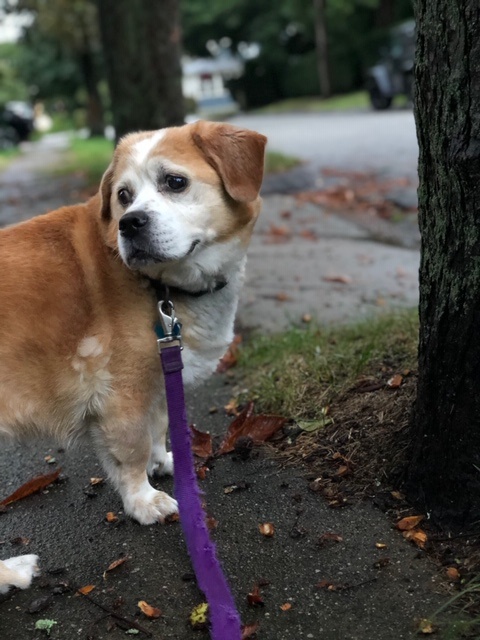 It’s a little embarrassing to admit this now. In fact, it was embarrassing at the time. The first time I saw Jack, I thought he looked goofy, maybe too goofy to love. His head seemed to be too big for his body, like he was a Franken-dog.

It’s not that I hadn’t been warned. Our friend Richard had told us about the dog. He’d been rescued by their dog whisperer friend Meg and she thought the dog might be right for us.

But, Richard added, “he is a little funny looking.”

We trusted Meg, who had taken in all sorts of dogs over the years and could see into their hearts. So we met Jack, a corgi-beagle-pit bull mix (we guessed) on a Saturday in 2007. While Meg was out of the room, I whispered to Neal my concern that Jack just looked too odd. Neal, who had taken years to convince to even get a dog, looked at me like I was a baby killer. What kind of monster had he married?

OK, maybe I was being ridiculous. Here was a dog who needed a home, who Meg said could be trusted around our youngest, medically fragile child, and who wasn’t a puppy (we had enough going on with that youngest child that the idea of training a puppy was daunting). 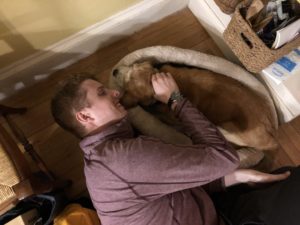 Even though my family had always had a dog growing up, I didn’t actually know all that much about having a dog as a pet. Jack set about to teach me. One morning early on, he came into our bedroom, stood there looking at me and let loose a stream of urine. I was horrified, and annoyed.

OK, so I had to show him I was top dog. I enrolled the two of us in a training class in Warwick that taught me how to work with Jack. It was amazing – like getting an instruction manual. I learned to carry soft treats (usually cheese sticks) around with me to reward Jack when he followed instructions. In truth, we both could have used more classes – he didn’t always come when I called – but we’d figured out the basics.

Jack and I walked and walked and walked under the belief (I think it’s a good one) that dogs do better at home if they get a lot of exercise. We made new friends in the neighborhood. Jack had a particular friend, Rey, a majestic German shepherd. When we’d arrive at a field where the dogs could run off leash, they would see each other, pause dramatically, then race toward each other. 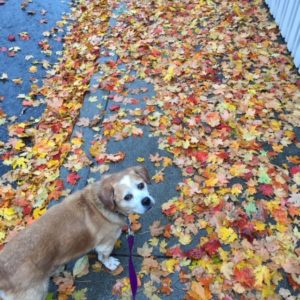 At home, Jack was a peach: easy going, not prone to barking, and happy just lying nearby or, maybe, on your feet. With those Corgi legs, he was low to the ground, keeping him away from many temptations. Once, when Rey was over, I saw the difference: countertops could be a smorgesboard for tall dogs.

Jack had another special friend, this one of the human variety. Katie, long-time family friend, was devoted to Jack. Each time she came over, she’d get down on the floor and give him lots of extra love.

The only problem at home was he never warmed up to our two cats, who ended up spending a lot of time in the basement after Jack arrived. Katie would try what she called “forced love” with the pets. Jack never could see the cats as anything other than something to chase. That was the only sign at home of his alpha tendencies. Out in the world with other dogs, we saw that tendency more. He did better with other dogs when he was off leash. On the leash, if he felt threatened, he could put on a mean “Cujo” impression. We learned to read Jack’s signals when approaching another dog on a leash. 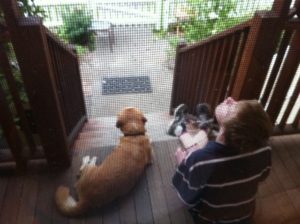 Molly, a white lab who lived on the next street over, was Jack’s frenemy. Rumor had it, Jack stole one of Molly’s bones one day, sparking the mutual animosity. Or maybe they were just two alphas in close proximity. They would bark at each other at any opportunity. On walks, we gave Molly wide berth.

“Look at that cute dog! He’s smiling,” people would invariably say. It was true. Jack wore a perpetual smile.

He was also a bit of a rascal. Over the years the EG police and different neighbors would return Jack after he’d escaped. He once spent the night in the pokie … well, he was picked up by the EGPD and taken to the North Kingstown Animal Hospital. It cost just under $100 to spring him. It was worth it.

Jack loved snow. He seemed to think he had longer legs. He would just disappear into a pile of the stuff, then jump out. He also liked to chase after falling leaves, kind of like a child with bubbles. Sometimes, Jack would get back from a walk and have a brand new burst of energy, running laps around the downstairs in a figure eight. He loved water too, bounding into the bay at Goddard Park, then rolling in the sand. That was a mess. But I loved that he liked the water so much.

A couple years ago, we noticed Jack’s hearing had diminished. He didn’t come upstairs very often anymore. His walks got shorter. This past winter, he really started to slow down. Some days we’d walk to the cemetery and back. Other days, just getting around the block was difficult.

We’d long since given up leaving the house by the kitchen porch with its five stairs, opting instead for the front door, which had only two steps. Even that began to be a challenge for Jack. Walking had become difficult and his eating was off. A few weeks ago, we alerted our son, Aidan, who’d loved Jack the most of our three children. He came home that weekend to say goodbye.

Eventually, we made the unhappy decision a lot of people end up having to make for their pets. On Friday, we took Jack to the vet one last time.

Jack was a good dog, “the best dog,” said Aidan.

Thanks for everything, Jack. Say hi to Rey, and Molly, and Meg. See you around.