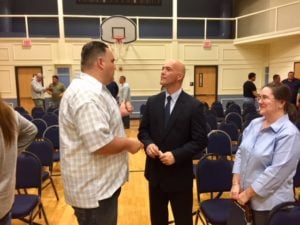 When Fire Chief Russell McGillivray took off his East Greenwich Fire Department shirt Monday evening, people knew he was no longer the chief.

After the council reconvened in open session, about an hour after it had gone into executive session, Town Manager Gayle Corrigan read a statement in which she announced she had dismissed McGillivray “without cause.” There was no further discussion before the council moved on to the next agenda item. 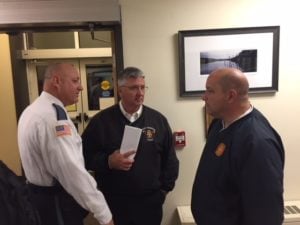 With that, McGillivray was gone. He joined the department in February 2011, having started his firefighting career at the West Warwick Fire Department. He was on duty the night of The Station nightclub fire that killed 100 and injured many others. McGillivray always declined to talk about that night. He was well liked, but Corrigan let it be known she had lost faith in him during testimony in the Town of EG vs. EG firefighters trial in September.

He will receive six months severance as per his contract, as well as receive remaining vacation pay.

In McGillivray’s place, at least for now, is Christopher Olsen, who attended the meeting Monday along with his wife. The Town Council voted 4-1 in favor of Olsen to serve as interim fire chief. He will be paid $65 an hour. 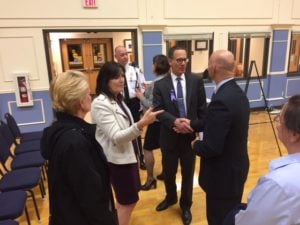 Olsen is the retired fire chief for Cotuit, Mass., a small Cape Cod community. He and his wife live in Rochester, N.H.

Olsen stayed through the meeting, then met with firefighters and town officials afterwards. He begins his job immediately.

Corrigan said there would be a search for a permanent chief. No timetable was offered.