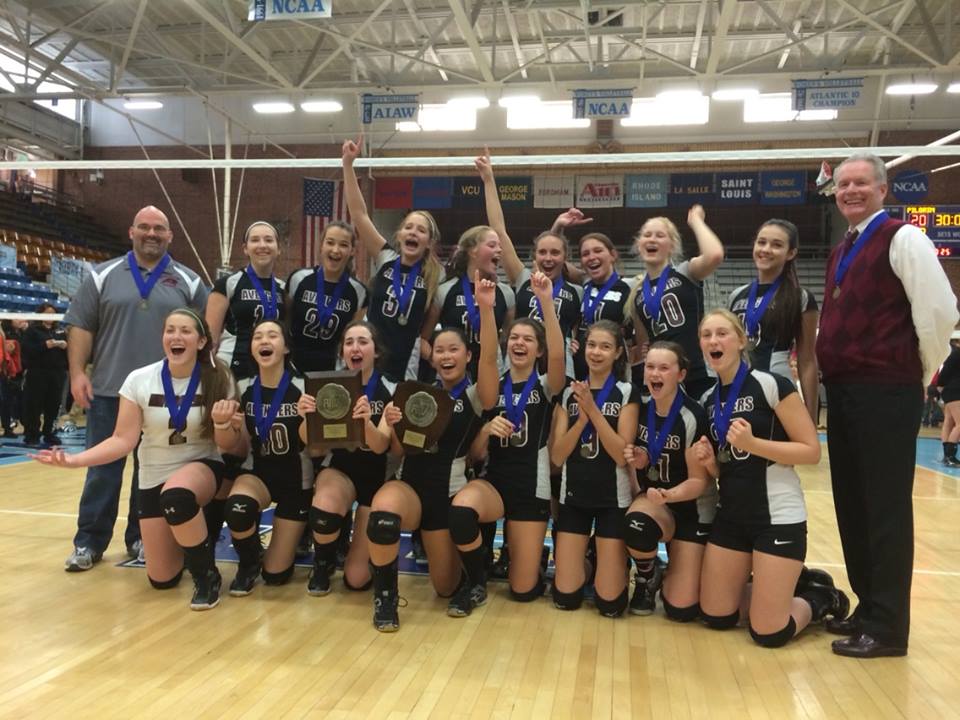 East Greenwich beat Pilgrim Sunday in the Division 2 state championship, besting the Patriots 3-0 for the third time this season. It was a sweet win after the hard-fought 3-1 victory over Cranston West in the semi-finals Thursday and capped a perfect season.

“The girls have worked very hard to get to this point,” said EG Athletic Director Chris Cobain. “They deserve the crowning as champions after losing two years in a row in the semifinals.”

Senior team captain Phoebe Wong again showed her leadership and talent with consistent setting, passing and hitting throughout the match

“I think she’s the best player in the state,” said Coach Ryan Garno. “She simply makes every player on the court better. And not just by a little – it is by leaps and bounds. Phoebe can do it all – she is very skilled defensively, she reads the situation always considering the player attacking and the position of the ball. She is then almost always in the best position defensively. Phoebe is a strong attacker and our best server. She can routinely serve any position on the court.”

Garno, who stepped in as head coach this year while his wife Terry is on maternity leave, said of all the players he coached (including college level), Wong was the best.

“If I were to build a team utilizing all of the players in the state of Rhode Island, Phoebe is my number one choice,” he said. “I can utilize her abilities to play any position on the court, she is that diverse, and she will do it with zero complaints.”

But, he said, the team as a whole was very balanced. And their height didn’t hurt either.

The championship – the team’s first since 2004 – caps several years of building a program and renewing interest in volleyball, said Garno.

The team won the Koch Eye Invitational Gold Bracket this year, where they faced both Division 1 and Division 2 teams, so the stage was set for victory Sunday.

This was the third time playing Pilgrim and they had beaten the Warwick team in straight sets the first two meetings. On Sunday, the first set (which went to 27-25) was nerves, said Garno. The Avengers made much faster work of the next two sets.

“Our height was too much for Pilgrim,” said Garno.

For Carosotto, playoffs for a the third year in a row at URI’s Kenney Gym proved the charm. A junior, Carosotto had been with the team the past two years when they fell in the semis at Kenney. This year, they won not only the semis but also the state championship there.