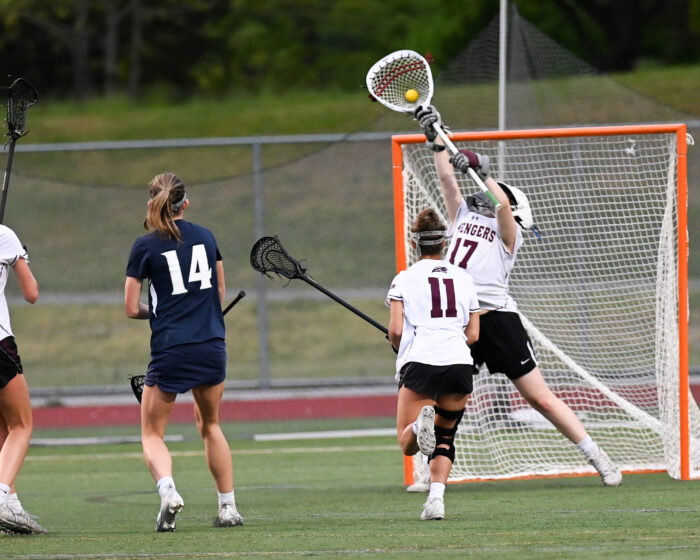 Above: Fiona Baxter goes high for the save against SK. Photo by Chuck Nadeau (find all Chuck’s photos at chuckn.com).

And an earlier 17-7 loss against Prout

What a finish for the East Greenwich Avengers Lacrosse team! The LAVs, as they call themselves, hosted the South Kingstown Rebels on an emotional Senior Night for the Avengers Friday. The team honored their four seniors, Stella Jackson, Lila Somvanshi, Sadie Moore, and Jade Sciaraffa. The sentimental send off had both players and fans in tears before the first whistle of the game.

This was a game that few thought the Avengers could win – the players clearly did not get that memo because they came out determined and quickly convinced the fans that they had a shot.  In the first half, EG dominated the draws with junior Helena Dunwoody winning 7 to SK’s 1, allowing the Avengers to be on the offensive for most of the first half. Juniors Mila Navarro, Jeremi Morrison, Izzy Gelzhiser along with freshman Eva Dufresne and Maeve Kiernan each had 1 goal a piece. Goalie Fiona Baxter had an exceptional first half saving the majority of the Rebel’s attempts. The score was EG 5, SK 4 going into halftime.

In the second half, Dunwoody’s command of the draw was relentless, winning 11 to SK’s 2, but SK kept the score close by capitalizing on EG turnovers and scoring on fast break opportunities to match the Avengers points for point. The LAVs were undeterred despite the fact that yellow cards were abundant, leaving EG at least 1 player short for almost 17 minutes of the 25 minute second half. EG’s defense and goalie Baxter kept the score incredibly tight with Julia Moore, Dufresne, Morrison, and Dunwoody contributing critical goals to the scoreboard.

With EG trailing by one point in the final seconds of the game, the crowd and players held their breath as Navarro took a heroic shot from the 8 meter mark with 9 seconds on the clock.  The shot was good, the score tied at 11 and the LAVs and Rebels went into a 3-minute sudden-death overtime period. The Avengers continued to do what they did all game – they controlled possession, worked together, and Dunwoody put 1 in to end the game EG 12, SK 11.  In a tough season of mostly lopsided wins and losses, this victory on Senior Night under the lights of Carcieri Field was hard fought and well earned.

Earlier in the week, the Girls Lacrosse team faced Prout on what was a beautiful night for the Crusaders’ senior night. East Greenwich started the first half with momentum, jumping to a 3-1 lead with junior captain Mila Navarro scoring 1 goal and freshman Catherine Sprague with 2 goals. However, the Crusaders capitalized on EG turnovers and held possession, matching the lead and adding another 6 goals to make the score 3 to 7 in favor of Prout at the end of the half.

In the second half, Prout continued to push the EG defense, outshooting the Avengers 18 to 7. Junior captain goalie Fiona Baxter had her hands full as the last line of defense, but managed to save 11 shots. EG did get on the board  Navarro scored another goal and junior Helena Dunwoody had 3 goals in the second half, but it was not enough to manage Prout’s prevailing offense. The final score was Prout 17, EG 7.

In the first round of the playoffs Tuesday, the Avengers will play Middletown away.

Photos from the game against South Kingstown: 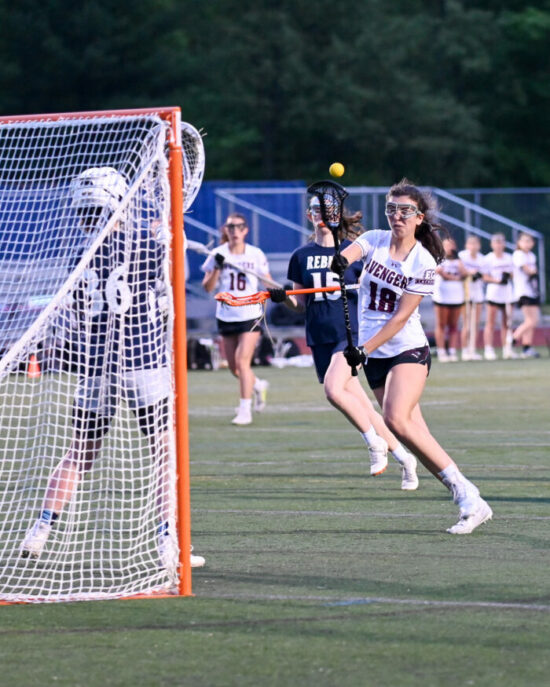 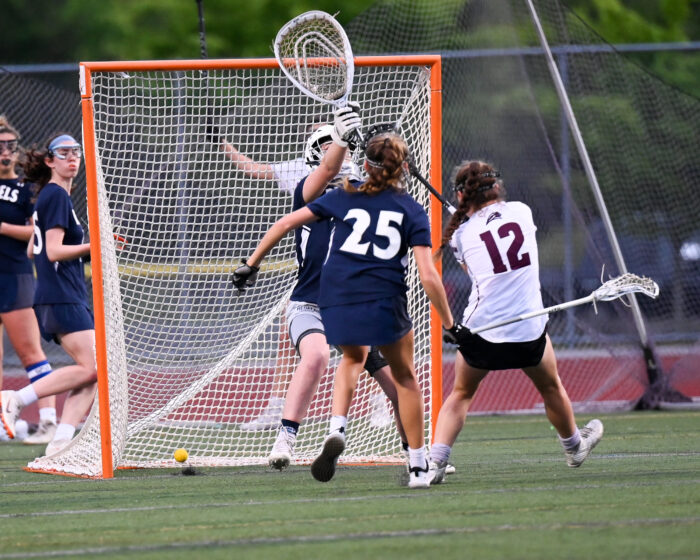 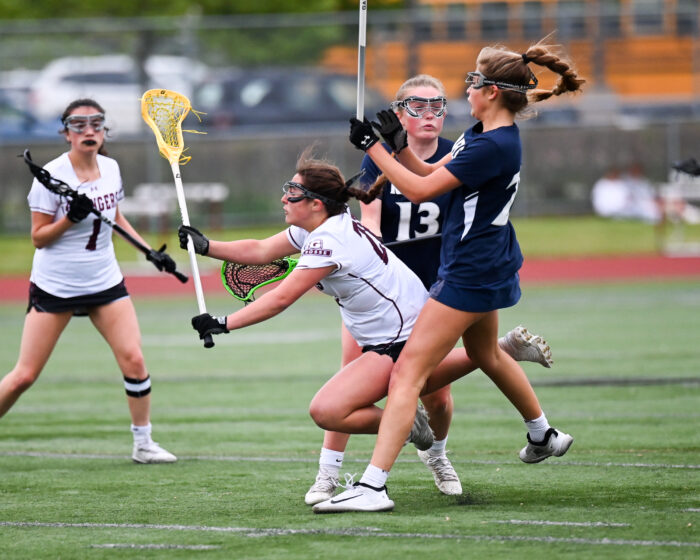 Emily Loiselle gets sandwiched as she moves forward. 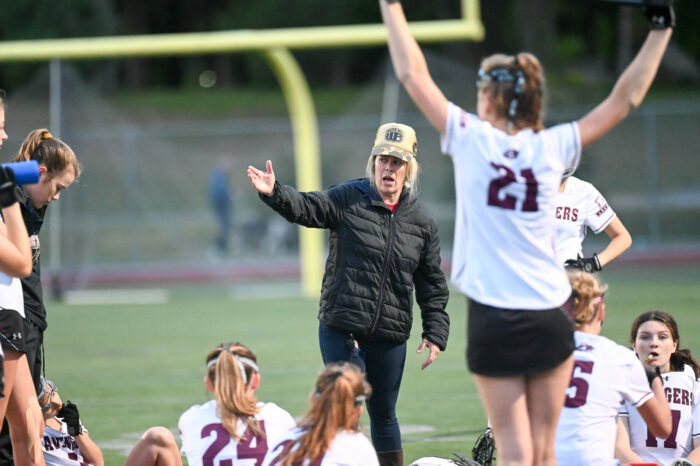 Tommy Sprague lives in East Greenwich. Our thanks to him for covering Girls LAX. EG News is looking for similarly motivated sports enthusiasts to help us cover other EG sports. If you are interested, contact [email protected]. It’s a lot of fun!