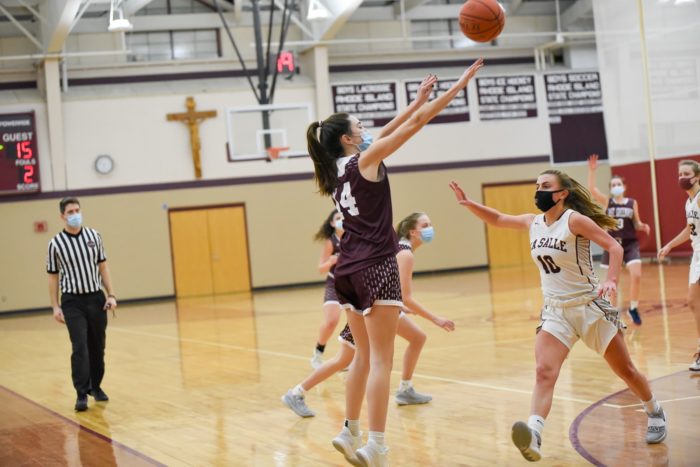 Above: Meghan Pagliaro makes a 3 from way outside the line. Photos by Chuck Nadeau. Find all his photos at chuckn.com.

The year of basketball came to an end for the Avengers. Not that this shortened, face altering, socially distanced season played a part.

What can I say? They played a mostly even well-matched game. The only part was the first seven minutes of the first quarter. That’s how long it took for EG to score. It was 10-0 with one minute left. The first quarter score was 12 to 6. That’s like spotting them 10 points. Would it have made a difference? I’ll let you decide.

From that point on, it was a mostly even game. La Salle led for the entire game with EG slowly gaining. End of the first half … 23 to 15 for La Salle. The final score was 46 to 35.

“I’m extremely proud of our team,” said Coach Dave Maccarone. “Every single girl played hard and never gave up all season long. Our seniors were true leaders and great role models for the team. We won five games in a tough Division 1 and we were playing our best basketball the last week of the season. The future of the EG girls basketball program looks very bright.”

Maya Barnes goes for the layup with Ashleigh Waterman guarding.

Julia Stanger goes up for the short baseline jumper.

Hope Gee traps the ball for a jump ball call.

Some strategy before the game.

Some strategy before the game.

Alex Mega hands the ball off to Julia Stanger.