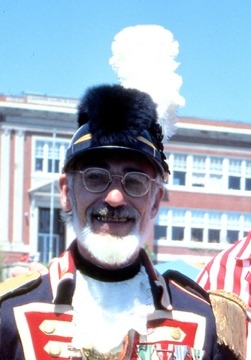 Gilbert A. Hempel, CWO 3 U.S. Army (Ret.), 90 passed away March 1.. He grew up in East Greenwich, son of the late Chester and Jessie (Colette) Hempel.

He was born in 1924 and attended school in East Greenwich until he volunteered as a soldier in the Second World War, served in the European Theater having participated in the invasion at Omaha Beach and later in the Battle of the Bulge (Belgium) and liberation of the German Republic. Returning from Europe, Gilbert continued serving in the U.S. Army eventually being assigned to Taiwan where he instituted Scouting in that country.

Later he was assigned to Thailand working in logistics. While there he met his wife, Lilian Bjorck, whom he married in 1959, in her home country of Sweden. When reassigned to the United States he served first in Bangor, Maine, later in Fort Riley, Kansas, and eventually in Fort Wainwright, Alaska.

Returning to the lower 48, he was reassigned to Intelligence in New York City, finally ending up in his home town of East Greenwich, where he retired in 1969. In civilian life Gilbert Hempel worked tirelessly for the town as director of the Chamber of Commerce, as a Rotarian and a Paul Harris Fellow, as chairman of the town’s Bicentennial and Tercentennial Committee, as deputy director of Civil Defense, as director of Emergency Management Agency for East Greenwich, as a Fire Commissioner of the town, as chairman of the Building Committee of the E.G. Veteran Firemen’s Club and as initiator of visits by American Wind Symphony in 1976, 1978 and 1979.

Shortly after returning to East Greenwich, he joined the Kentish Guards, and Rhode Island Militia, where he rapidly rose to the rank of colonel commanding, where he remained 1970-79. Later he became a general of the Rochambeau Army reenactment and march to Yorktown, Va., and the defeat of the English. In 1983 he planned a trip to Paris with the Rochambeau Army to celebrate the 200-year anniversary of the Treaty of Paris, which brought about the end of the Revolutionary War.

He was a life member of the Military Officers Association of America, Disabled American Veterans, VFW and East Greenwich Veteran Firemen’s Club. He was also a member of the AUSA, Rotary Club International Kentish Guards and the R.I. Militia. Finally, Gilbert was appointed military aid to the Governor Garrahy and military coordinator for Rhode Island with the rank of general.

He is survived by his wife Lilian; sons Eric and Gunnar and daughter Lisa; 8 grandchildren: Melanie, Alison, Kirsten, Caleb, Nathaniel, Jackson, Noelle and Chashtin, and great grandchildren Rustin and Ada Lynn. He was predeceased by four siblings. His funeral service will be Saturday at 11 a.m. at the Hill Funeral Home, 822 Main St., East Greenwich. Burial with military honors will be in East Greenwich Cemetery. Calling hours are Friday from 4 to 7 p.m. In lieu of flowers donations may be made to the East Greenwich Animal Protection League.

You can read about the East Greenwich Tercentenary, Part One, here.