Getting Fired Up for Cole’s Unified Basketball Season 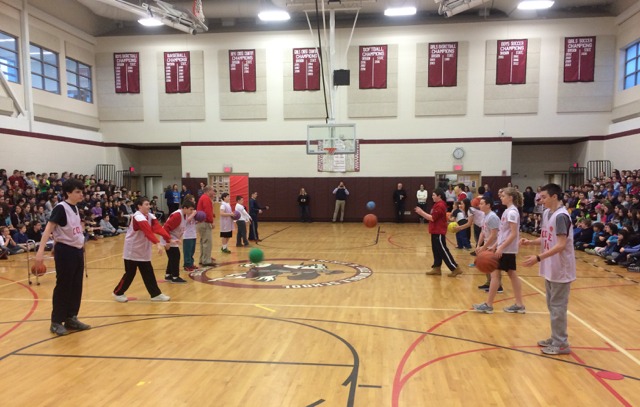 Adam Scott is all in for Unified sports, as evidenced by his participation last weekend in the Rhode Island Special Olympics Unified Plunge at Salty Brine State Beach (he raised $2,282 – the most raised by any Unified Plunge participant). Then, on Friday, he organized an assembly, a pep rally of sorts, to kick off the season for the Cole Middle School Unified Basketball team.

Scott has coached soccer teams at both Cole and EGHS over his 17 years as a science teacher at Cole, but when he took over as a coach of the Cole Unified Basketball team last year, it was just a different experience.

In Unified sports, students with intellectual and developmental disabilities play accompanied by “partners,” typically developing fellow students. The partners play a pivotal but secondary role to the athletes, setting up plays, passing the ball, encouraging the athletes. (Full disclosure: My son is a Unified athlete at EGHS.)

Unified sports are sponsored by Rhode Island Special Olympics in conjunction with R.I. Interscholastic Sports. This year, there are 17 middle school Unified Basketball teams, up from just 11 last year.

“It’s so rewarding for me to see the work I get to do with the athletes and the partners and to see how they really come together,” said Scott.

He credits adaptive physical education teacher Lisa McKay with giving him a lot of techniques to help the athletes succeed. As coach of the North Kingstown Special Olympics team, McKay knows her stuff.

“I’ve just had so much support in this building to keep this program as successful as it’s been,” Scott said.

The 15-person Cole team will play five games, including two home games (April 9 and April 30, at 3:30 p.m.). At the assembly Friday, Scott encouraged the student body to turn out for the home games – and to cheer as loudly for the opposing team as the Unified Lancers. Because that’s what Unified is all about.