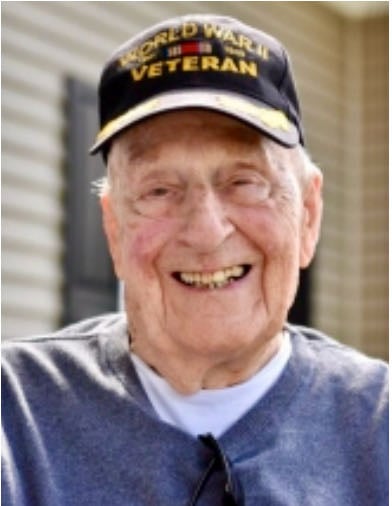 George was born in Mineola, N.Y. Through his strong love of country, he enlisted in the U.S. Navy weeks before his 17th birthday. He served as a radioman during WWII on the USS Augury in the Aleutian Islands.

Following the war, he married his high school sweetheart, Marilyn, in 1945. He began his work career in the mailroom of American Standard Co. in New York City. George’s friendly personality and people skills enabled him to move up the ranks (requiring numerous relocations) to a territory manager for metro NYC, and eventually regional manager. He later became VP/National Sales Manager of Burnham Boiler Corp. (now U.S. Boiler Co.).

George and Marilyn launched their own waterbed store in Lancaster, Pa., in 1980 which proved to be a great success. In 1997, they sold the business and moved to Rhode Island to be close to their grandkids. Marilyn passed away in 1999. George met the late Irene Servidio the following year and the two became best friends. George loved to sing, dance, travel, and play golf – walking 9 holes several times a week at 90 years old.

He wanted everyone to know he had a “wonderful life, wonderful family, and many good friends.” Thank you to Green House #15 for the loving care provided over the last five years.

In lieu of flowers, donations in his memory may be made to Saint Elizabeth Community (for the benefit of the Green House Homes), 2364 Post Road, Suite 100, Warwick, RI 02886 (www.elizabethcommunity.org).

You can leave an online condolence at the Carpenter-Jenks Funeral Home website HERE.