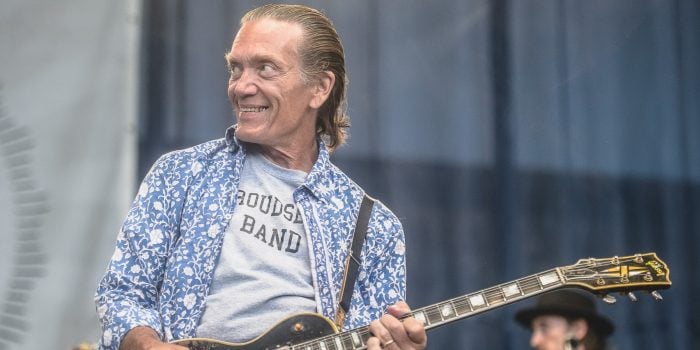 Above: Guitarist GE Smith. Photo courtesy of the artist.

The Greenwich Hotel will host famed guitarist GE Smith, playing with The Sliding Capos, on April 2, in the Updike Room, the hotel’s refurbished performance space. Smith started his career as lead guitarist for the pop duo Hall and Oates in the 1970s and ‘80s, then served as music director and band leader for the Saturday Night Live Band from 1985 to 1995.

How did he discover the magic that is East Greenwich and the Updike Room?

It turns out EG’s favorite doctor, Hub Brennan, has been studying guitar with Smith for the past few years, returning to a passion of his youth. Brennan was behind the rebirth of The Sliding Capos in 2018, a band originally formed by his brother, John, who died in 2013 (the original band – JB and the Sliding Capos – from the 1970s).

Smith has been in the limelight for decades. In addition to his early successes, he was the lead guitarist in Bob Dylan’s Never Ending Tour band and also served as musical director of Dylan’s 30th Anniversary Concert Celebration at Madison Square Garden. And he’s recorded and performed with other artists including David Bowie, Mick Jagger, Roger Waters, Tina Turner, Tracy Chapman, George Harrison, Eric Clapton, Tom Petty, Neil Young, Roger McGuinn and Eddy Van Halen, as well as many blues greats. He has been nominated for a Grammy Award together with Buddy Guy, and an Emmy Award for his work with the SNL Band.

This will be Smith’s first visit to East Greenwich.

“We are super excited that GE wants to play The Updike,” said Updike Room proprietor Joann Joseph. “This show comes on the heels of the Doug Woolverton jazz show. Two artists of this caliber appearing here firmly establishes the Updike Room as a venue both worthy and capable of hosting premier acts.”

Taylor Barton will open the show. Doors at 7, show at 8 p.m. Tickets are limited and are available at HERE.