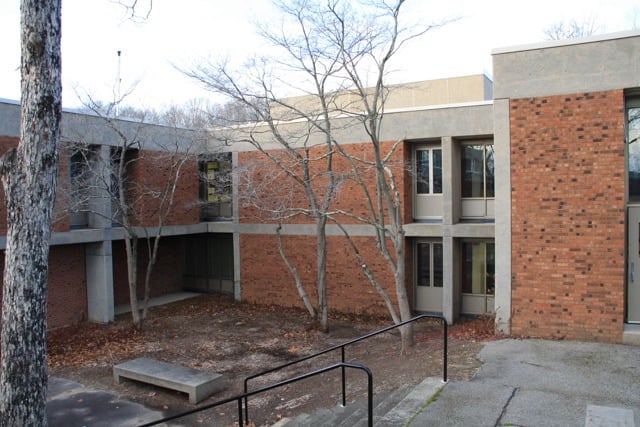 She had a peace about her that defied her circumstances.

Maksymowicz died in March 2012, at age 53. Now, plans are under way to create a memorial garden in her honor in the courtyard at East Greenwich High School – through efforts by a colleague and the new student-run Beautify EGHS club.

“She had such an impact on the students coming through the district – from at Little Red Hen when she was working there, through the high school. She was always working hard for the kids,” said close friend and colleague Sherry Mong, now in guidance department job that had been Maksymowicz’s. They had worked together in the front office at Eldredge Elementary for several years before Maksymowicz moved on to the high school.

“She had an everlasting smile,” said Mong. “Her motto was, ‘If I can put my lipstick on and move on, the day will be better.'”

Mong and students were at the School Committee meeting Tuesday night to talk about the project.

She said she’d been wanting to do something to honor her friend since she arrived at the high school in 2012. Things fell into place with the creation last year of the Beautify EGHS Club. They joined forces and plans for the garden began to take shape.

Using the courtyard was an easy choice. Other than for the occasional art class and on Ivy Day, the courtyard is largely neglected and looks it. The site of the memorial garden is, perhaps, the most neglected spot of all.

School Committee member Michael Fain, himself a graduate of EGHS, said he recalled a time when the courtyard was used more frequently, for something surprising in this day and age – smoking.

For Principal Michael Podraza, the idea of a quiet garden space is ideal.

“We believe this is a perfect use for the courtyard because so many classrooms look out to the courtyard so a silent area is important,” he told the School Committee.

School Committee members were enthusiastic about the garden Tuesday.

“It is a wonderful concept – a wonderful tribute to a wonderful person,” said Chairwoman Carolyn Mark. “From a mental health perspective, the kind of space that this could create for high school students, it’s just so consistent with so much of what we’re trying to create here in East Greenwich, so thank you.”

The project will be paid for through donations. If you are interested in donating, checks should be made out to East Greenwich High School, with “C. Mac” in the memo line. Mail or drop off donations at the high school, 300 Avenger Drive, E.G., RI 02818, Attn.: Sherry Mong/Barb McCowan, Guidance Dept.