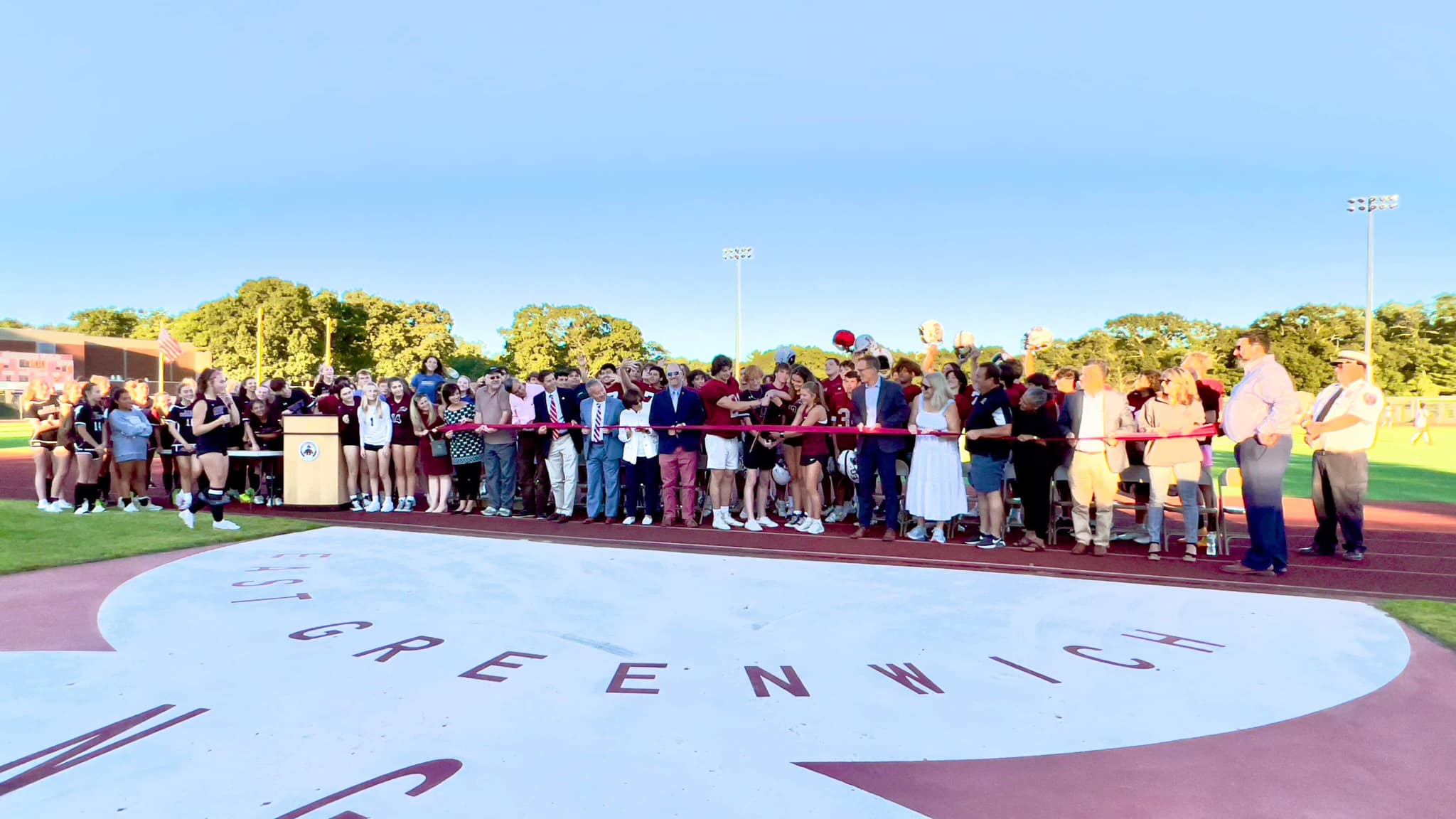 Above: There’s a new carpet of artificial turf at Carcieri Field this fall sports season and EGHS athletes cut the ribbon on it Thursday. Submitted photo

Reposted courtesy of The Spectrum (EGHS)

This week, Avengers Athletics cut the ribbon on the 2023 season. First to the school’s new turf, the girls soccer team. Following an early exit from playoffs in 2022, East Greenwich is confident in their division this season.

“It’s really important to be one team,” senior captain Riley Gopalakrishnan says. In addition to acting as one, senior captain Gracie Kauffman praises her team’s collaboration and commitment during preseason. “The communication’s been a lot better,” she says.

In turning a new leaf, Gopalakrishnan and Kauffman aim to create a positive environment for their teammates. “We want hard work, we want effort…and I just feel like we’re all having a lot of fun together.”

Their home opener Thursday against Cranston West was the first step in their journey to the state championship.

Field Hockey has dominated the state for three years and began this season with a 5-0 win against North Kingstown (9/7). Head coach Deb McMullen is looking for a four-peat this fall, led by senior captains Alex Mega, Gianna Salvator, Jillian Prior, and Grace Casey.

“We have a very experienced, highly skilled team,” McMullen says. Along with local success, the girls have been invited to Pennsylvania to compete against teams from all over the country.

“We are very excited,” she said. This fall, the Avengers will give Texas, Michigan, and New Jersey a taste of East Greenwich Field Hockey.

Girls Tennis hits the courts this year as the Division I runner up. Focusing on personal and team growth, senior captains Lily Shaughnessy, Annalee Ambler, and Kyanna Lin are set on another successful season.

“We are really changing our mindset to focus on positivity,” Shaughnessy said.

In unifying a strong team, Avenger tennis eyes a state championship to close out 2022.

Returning to the track this fall is Boys and Girls Cross Country. Immediately following the 2022 outdoor track season, the girls started training for a state sweep.

Shunney, along with Providence College commit Reese Fahys, are this season’s female runners to watch.

Co-captain Morgan Walsh remarks that this will be a “promising year for the team.”

On the boys team, senior captain Nick Martin has confidence in his team’s ability to compete for the class C championship.

“We also hope to place top 6 in the state,” Martin says.

In challenging the Avenger’s depth beyond East Greenwich, the boys aim to compete at the New England Cross Country Championships.

The team will also be traveling to the Great American Cross Country invitational, while also competing in local invitationals across Rhode Island.

Two younger runners to keep an eye out for this season are sophomores Luke Allen and Brody Fahys. Behind the sophomore class, Martin believes the freshman boys are also “a force to be reckoned with.”

Moving into Division II, the Boys Soccer remains optimistic for the 2022 season.

“One thing we are doing differently as a team is trying out new formations to make sure we can become the offensive team we are looking to be,” senior captain Ryan D’Amico says.

With playoffs in mind, D’Amico believes that his team can handle the new adjustments on the field, and within the competition.

“We want to prove that we can compete in Division I,” Ruff says.

School size is a factor, one that East Greenwich is on the losing end of. But they aim to try to play on the same level as those bigger schools. Throughout preseason training, Ruff has seen vast improvements from his teammates, which he hopes will “translate onto the field this year.”

Senior Robert Brooks defines unified as “a place where not only players can meet new people but make new friends.”

Entering the fall as defending state champions, the Unified Volleyball team has their sights set on another banner. Senior and athlete Matthew Carosotto shares his anticipation for the upcoming season.

“We have our senior night, and it will be good,” he says.

Carosotto hopes to remain champions as he competes in his senior year.

The Avengers have an exciting season ahead. Tune in through the final days of summer and the beginning of fall sports in East Greenwich.