‘Four Legs to Stand On’ Takes On Opioid Crisis

When someone in your family has a drug addiction, the world can seem like a dark place. The play Four Legs to Stand On sheds some light in that darkness, offering both compassion and truth. The play is about a family coping with a child’s drug addiction and it will be presented in East Greenwich on Thursday, Sept. 14, at the Westminster Unitarian Church on Kenyon Avenue.

The Academy Foundation is sponsoring the event, which is the fourth in a series of programs designed to address opioid abuse. After the play, which goes for about 40 minutes, people will split off into small groups for discussion with facilitators including students from Youth to Youth, a pharmacist, a mental health counselor and someone from the fire department. 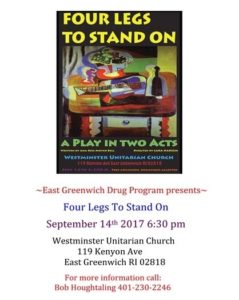 “It’s very powerful,” said EG’s drug counselor Bob Houghtaling. The play was written by Rhode Island native Ana Bess Moyer Bell, an actor as well as a playwright who was moved to write the play after losing loved ones to opioid overdose. (You can listen to Ana talk with Bob in a podcast here.)

“It’s about how substance abuse impacts families,” Houghtaling said, “the shame that goes on and how it disrupts the entire family. We have a national opioid epidemic that’s reached every community, including East Greenwich.”

Over the summer, at least three young adults who graduated from East Greenwich High School died of a drug overdose.

The program is meant to enhance awareness and keep parents vigilant, Houghtaling said. “If it provides a spark of hope for parents, I will view this as an outrageous success.”

The free program begins at 6:30 p.m. Donations will be accepted. At Westminster Unitarian Church, 119 Kenyon Avenue.