“Typical of hundreds of New England towns in many ways,” McPartland wrote, “East Greenwich nonetheless has a distinction and an individuality all its own. Ideally located, compactly planned, culturally alert and historically wealthy, East Greenwich can hold up its head with a good deal of civic pride.”

EG T&T featured panelists Town Manager Andrew Nota, Town Planner Lisa Bourbonnais, EG Chamber executive director Steve Lombardi, and GrowSmart RI’s Scott Wolf. The idea was to start the conversation about where East Greenwich should be headed while appreciating what we as a town want to retain. About 110 people came out for Monday night’s forum at the Greenwich Odeum.

As Scott Wolf pointed out, Rhode Island is the second most urbanized state in the union, but East Greenwich has a good mix of downtown area, suburbs and at least a couple of farms still in operation. Downtown East Greenwich with its many retail (or now restaurant) on the first floor, residential above, has maintained some amount  of mixed-use development that many communities are now trying to recreate.

Steve Lombardi said part of East Greenwich’s magic could be boiled down to that real estate adage: location, location, location. After all, it sits on the bay, is close to Route 95, and has a major airport just one town over.

“There’s so much we can do with that,” Lombardi said. One thing Lombardi would love to do is add a hotel to East Greenwich.

Town Manager Nota brought a municipal governance view to the panel, noting that East Greenwich, unlike most other cities and towns in the state, is growing in population, and he said it not just young families that are moving in.

Lisa Bourbonnais talked about the residential development taking place. The challenge, she said, was state policies taking away the town’s decision-making authority. In particular, the state’s push for more affordable housing – “nobody’s against affordable housing,” she said – comes with no ability for the town to cover the costs of additional residents (i.e. added school, road, sewer capacity).

“It’s tantamount to automatic approvals” for housing developments, she said. Her words were greeted with applause from some in the audience of 110 people. 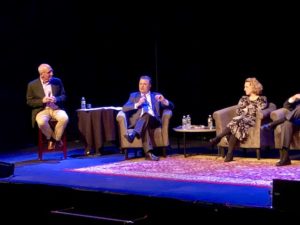 Nota said town officials needed to work with the state legislature to help with problems like this. Nota, who joined the town just in September, said the town has made a number of decisions in recent decades that have led to where it is now in terms of infrastructure and taxes. It was the town’s decision in the 2000s to borrow (bond) money to improve school and municipal buildings (including a new Cole Middle School, a new police station, a capped landfill – aka Scalloptown Park – and other building projects) that makes our tax rate one of the higher ones in the state. Those debt payments are starting to decrease as debt is retired, but Nota said the town’s long-term success will depend on the community’s ability to both be patient and flexible.

When it came time to dream about the future, Steve Lombardi said in addition to wanting a hotel in town, he hoped for a comprehensive plan for the waterfront, including something that would link Scalloptown Park at the southern end of Greenwich Cove all the way to the EG Yacht Club, at EG’s northernmost waterfront border.

Scott Wolf said the town should try to consider a less “auto-centric” lifestyle, i.e. life beyond our cars. He said the town would do well to consider adopting a “complete streets” plan that would accommodate all users, including cars, pedestrians, and bicycles.

“A lot of young people are looking for more bike and pedestrian-friendly communities,” he noted.

Nota said the town was moving on both of those issues, saying he’d already contacted the state DOT about Main Street, which he described as “a little scary” for pedestrians. And he said the Town Council was about to put out an RFQ (request for qualifications) for an initial study of the waterfront.

Lisa Bourbonnais said the town missed an opportunity in the 1980s when Main Street was repaved and it did not spend the money to bury the utility lines on Main Street. She called to the lines “visual noise” and encouraged the town to not miss such an opportunity when it next came around.

Lombardi said he wished Route 95 northbound could be connected with Route 4, alleviating a whole lot of traffic in the Division Street–Route 2 area. And he said it’s not too early to start planning for the town’s 350th anniversary, which happens in 2027.

Perhaps the most important takeaway Monday was the need for civic engagement, whether it’s for planning the 350th anniversary, a waterfront plan, or Main Street improvements.

“Community engagement is probably our greatest challenge,” said Nota. “We’re looking for … input from you.”

Town Planner Lisa Bourbonnais credited the hundreds of residents who have volunteered over the years on town boards (there are seven: planning and zoning boards, as well as the land trust and historic district, cove, affordable housing and cemetery commissions), saying she was looking to hear from town residents as a result of the EG Today & Tomorrow event.

EG Chamber of Commerce executive director Steve Lombardi also lauded all the people in town who volunteer on activities like Summer’s End, the Main Street strolls, and the Turkey Trot.

So now it’s up to us, the residents and business people of East Greenwich to speak. Take just a few minutes to answer a five-question survey that replicates the questions put to panelists on Monday. We’ve heard from them, now let’s hear from you!