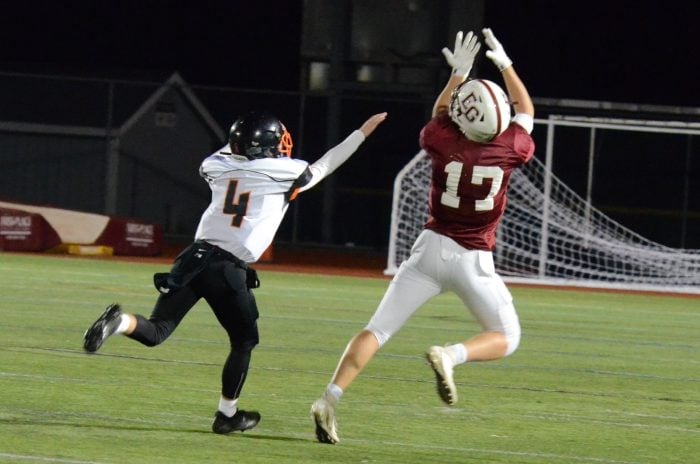 Above: Avenger Jack Farrelly makes the catch during a game in 2019. Photo by Mary MacIntosh

“Speed kills” is a sports adage as old as the day is long. If you have speed it can make up for a lot of deficiencies. Maybe not all. But some. The following story is about a little guy who had that kind of speed. Jimmy Sullivan grew up in a trailer in Pawtucket. He lived there with his Dad, Fred. His Father loved the movie and stage shows of the era and got young Jimmy, age 7, interested in tap dancing.

At first Jim performed in local church and variety shows. He got a break when he appeared on the Ted Mack TV Amateur Hour. The display of his talent and the sudden notoriety propelled him to performing for cash on local shows and in local clubs and events.

Besides being good for your cardiovascular system, tap dancing works your coordination and also builds your body, especially your legs.

Later on, this helped young Jimmy as he attended Goff Junior High School in Pawtucket and led Goff’s football and track teams to league and city championships. His brilliance on gridiron and track brought attention from Pawtucket East coach, Gig Pariseau. It also grabbed the attention of St. Raphael Academy football coach Bob Congdon. He offered Jimmy a scholarship to that school so he could play for the Saints.

Sullivan, only 5-7 and 150 lbs., suffered through three lackluster campaigns including a 0-10 junior season. He hurt his knee and had to have knee surgery. Still, the potential was there and team captain Don Payton recognized it. He got the team together and they formed a pact to “do or die” their senior season to bring the Saints back to the forefront in Rhode Island football.

And, that they did! Jim returned fit as a fiddle and scored 130 points, a state record at the time, and averaged 12.5 yards a carry as SRA went 10-0 in 1955 and defeated arch-foe West Warwick, ending the Wizards’ 56-game winning streak. The team won the Class B title and many of their boys went on to play in college. Jimmy also had a great spring track season as one of the top sprinters in the state.

One day after the season Jimmy was called out of class. He was told to report to the coach’s office. Once there Coach Congdon introduced him to the visitor, Boston College Head Football

“I don’t feel small,” answered Sullivan. It’s one of those lines that come out of people and if they come out at the right time they can change people’s lives. This one sure did. Holovak awarded him a football scholarship right on the spot. 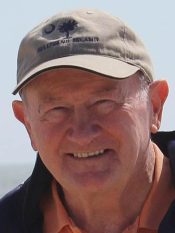 Jimmy Sullivan went on to Boston College. His career there paralleled his stint at SRA. BC held him out as a frosh to concentrate on getting his grades up. He suffered some injuries but he put enough of himself out there to have some great college moments, even being named to Army’s All Opponent team one year.

Sullivan went on to be a teacher and coach and then an award-winning administrator working in distributive (vocational) education. He has served on the Chariho School Committee and been a contributing member to all the communities in which he has lived for over 60 years.

So, to all those kids out there with dreams: If you can believe it, you can achieve it. Don’t let anyone tell you different. Find your own path. Remember, even the acorn eventually achieves greatness as it grows and becomes a Mighty Oak! Find your niche. Find a way. And grow where you are planted. Good luck!

The story below deals with a young Rhode Islander who is doing just that….

JOEY ACCIARDO JR., is following through on his dream to play in California, and then, maybe get into acting in California. Word has it the talented Johnston High receiver, who made national news with his “back flip in motion” is talking to Santa Monica Community College in the Golden State.

The school, which sends a goodly portion of its players to stock the rosters of USC and UCLA, plays in the Pacific Division of the American League of the Southern California JUCO organization. Other schools in that league are Los Angeles Valley, LA Pierce, Moorpark, Antelope Valley and Santa Barbara.

Joey has his eyes set on UCLA, where he hopes his skill sets fit in with the wide-open passing game of Bruin’s Head Coach, Chip Kelley.

In his off time, Joey could put his other talents to work in the glitz and glamour jobs of Southern California, like movies, TV and gymnastic and dance work.

A long time ago, another football player, from USC, found movie work in Hollywood as a stuntman and wrangler. His name was Marion Morrison. He worked his way up to bit actor, then supporting roles and finally star. He is known to America as John Wayne. Good Luck to Joey. We’ll be following him.

Word on the wire …

Just came in is that East Greenwich High wide receiver/safety JACK FARELLY is in serious discussion with Assumption, Endicott and Union. Any of those would be a good choice. RPI was in the discussion at one time also. Also, from EGHS, RB/LB Mike Balsamo is talking to Salve Regina and QB Parke Hardesty is going to Worcester State, as of now.

Pilgrim fullback/linebacker DAN HALLIWELL could be on his way to University of Massachusetts-Dartmouth. They really like him in Corsair-land. Dan hopes his buddy, BRADY BURKE, joins him in signing with the Blue and Gold.

JAKE PICARD (Bishop Hendricken) at VillaNova has already won CAA Athletic Commissioner’s Academic Award and VillaNova’s Athletic Director’s Honor Roll Award. More importantly, the 6-3 290lb lineman has attracted the attention of the Wildcat coaching staff. He appeared in a few games his first year but they say he is good and has plenty of upside, which will serve him in good stead as he tries to break into the Philadelphia school’s lineup.

SEAN COYNE (Portsmouth) at U-New Hampshire played in all 11 games this year and had at least one pass reception in each. He ended up with 35 catches for 325 yards and three TD’s leading the team in catches. He also scored one rushing touchdown.

ADRIEN PEAH (LaSalle) is hoping to get some action this spring when pro leagues start warming up their draft charts. Peah was a standout on a woeful UMass FBS team. He came to every game to play and was always putting out effort. He was twice named to the Phil Steele Football Magazine’s All Independent Second team. He finished his senior campaign with 17 solo tackles, 35 assists, 3 tackles for loss, 1 PBU and 3 quarterback hits. With another pro league starting up (USFL coming back) and 8 others here, it is a good possibility he could land somewhere. AND, don’t forget Europe, which has 200 pro teams playing American football.

… I have word from a good source that there are at least 6 to 7 boys playing in the Rhode Island ranks, who could draw some D1 attention. Two or three play in the northern climes, a

couple are in the mid-state area and three more in South County. URI, Bryant and Brown should be alert while perhaps BC, UMass and UConn might consider them.

Back in the day a host of R.I. gridders went out West to play football at schools like BYU, Arizona, Arizona State, CalPoly, Houston and the like. The first BIG reason was former URI coach Hal Kopp, who moved on to BYU and having had great success at URI with locals like Pat Abbruzzi, Charlie Gibbons, Ed DeSimone and others and knowing about Rhodies who stood out at BU, Northeastern and BC, he brought out RI stars like Joe “Machine Gun” McGuinn, Jackie Jordan and a few more. Fred Whittingham of Warwick went there and to CalPoly then to the pros.

URI is starting to reap the benefits of its nice 2020 football season. With the new transfer portal going big, kids are going to a lot of places besides Fanville. Rhody had a great recruiting class, which included Classical’s MARQUIS BUCHANAN, and they are dealing with some outstanding

talent coming in from Ivies, other FCS and maybe FBS schools. Good for them. Be nice to see an 8-9 win season next year and a playoff berth. Contributing RI’ers could include JAYLEN SMITH, GABE SLOAT, MALIK GAVEK, MONTANER FRESILLI, FREDERICK MALLAY and EMMANUEL GOMES.

At Catholic University of America down in the D.C. area, KEVIN LICCIARDI of East Greenwich High is finally getting some love at running back. The 5-10, 177lb former Avenger played in 10 games this year for the Cardinals and rushed 76 times for 427 yards and 3 TD’s. He had a long run of 61 yards. More will be expected of him his senior year and Kevin is looking to deliver.

Due to illness, the Providence Gridiron Club has moved its Hall of Fame night, originally scheduled for February, to March. More information and details will be forthcoming. So far the Annual Awards Banquet in April remains unchanged.

This release provided free of charge, by The Brooker Sports Initiative, goes to players, coaches, officials and administrators and anyone interested in Football in the Ocean State.