A house at 1876 Frenchtown Road caught fire Thursday night, causing significant damage, but no one was injured. The house was occupied by one of the three residents, who called in the fire around 10:30 p.m.  She met the firefighters in the driveway when they arrived. .

“They’ll be out of the house for a while,” said EGFD Chief Bernie Patenaude Friday. “There was severe damage.” 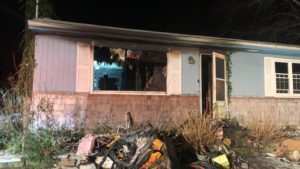 Fire Marshal Steve Hughes was still investigating but said there was no determined cause at this point.

Mutual aid was provided by fire departments in North Kingstown, West Warwick and Coventry. Patenaude said there was a small “rekindle” of the fire Friday morning while firefighters were there. It was quickly extinguished.

While it’s not clear what caused the fire Thursday, Patenaude said this time of year it was especially important for residents to take care with lit candles, space heaters, and Christmas trees (make sure light strands are in good condition). He said anyone collecting ashes needed to use a metal bucket and to dispose of them outside, away from any structures.