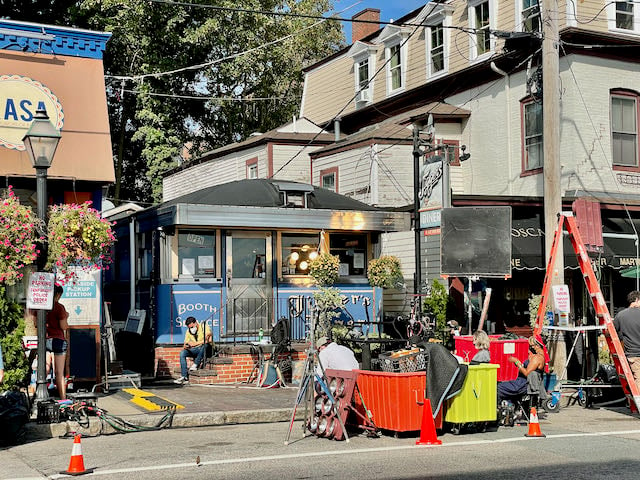 Above: “Out of the Blue” shoots inside Jiggers Monday morning. 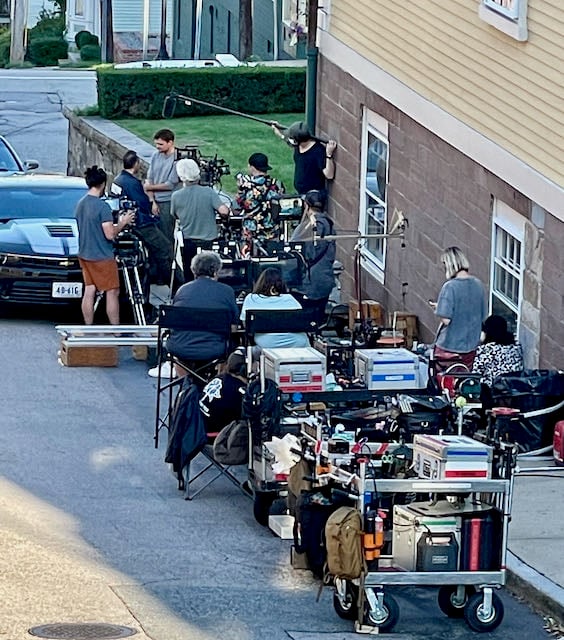 Actor Ray Nicholson, the male lead in “Out of the Blue,” is in the light colored shirt on the sidewalk next to a car.

No, Hocus Pocus II was NOT filming in East Greenwich this week. But another Hollywood movie was – ”Out of the Blue,” a romantic thriller written and directed by Neil LaBute, and starring Diane Kruger (“Inglourious Basterds,” “National Treasure,” and “Troy”) and Ray Nicholson (as in, son of Jack).

They took over the Varnum Armory Saturday and Armory Executive Director Patrick Donovan said it was a positive experience.

“We discussed what would be moved … they ended up only taking down a couple of signs and one of our wall plaques,” said Donovan. “I was surprised at how large the operation was….. If I had to guess, I would say there were about 30 to 40 people involved between the cast, crew and security. Everyone was very nice and respectful of the property.”

He added, “I ended up giving several impromptu tours for people who took an interest in the museum and the building generally.”

On Monday, the crew filmed inside of Jigger’s Diner and on Courthouse Lane. (They rented the Armory Monday again too – to set up a catered lunch for everyone.)

Coincidentally, locations manager Matt Beltz happens to be local – he lives in the building on Main Street and Courthouse Lane. He said that’s often how it is on a set.

“There’s this myth when Hollywood comes to town, but almost 85 percent of us are local,” he said. His job is to scout locations (there are 25 total for “Out of the Blue”) and make arrangements with property owners, police and anyone else who needs to be involved.

“It’s my job … to make sure we’re taking the right precautions to do right and get everybody here safely and organized,” said Beltz. Sadly, this was the last day of filming in EG.

Late Monday afternoon, you could watch the action on Courthouse Lane, where they shifted the filming. Two women joined me at my perch atop the steps that lead from Peirce Street down to Courthouse Lane. They’d asked what I’d seen. I pointed out Nicholson, who was on the sidewalk, and LaBute, but said I hadn’t seen the female lead.

“You mean, Bette Midler?” said one of the women.

I had to break it to them that the movie being filmed was not Hocus Pocus 2, which is apparently building a set up in Lincoln in preparation for filming there. Production on that movie is set for October – of all months! 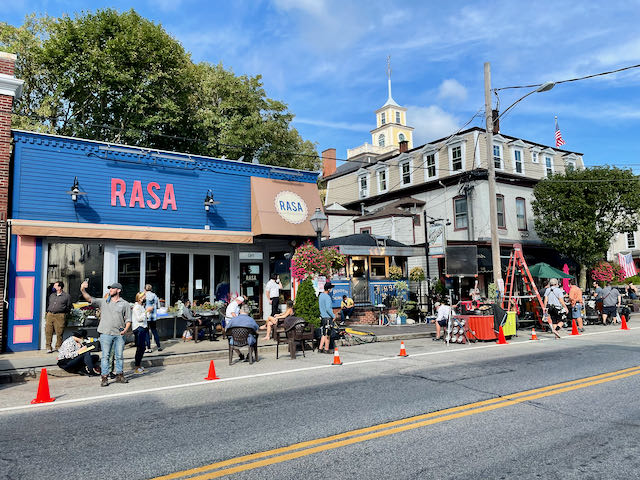 The scene on Main Street Monday morning, during filming of “Out of the Blue” inside Jiggers.