Above: Anabel Stavrand faced head on collision during the first and second quarters, but she stood her ground and defended Carcieri Field.

Photos and text By Sophia Aigner

On Monday evening, the EGHS Varsity Field Hockey team reminded us why girls run the world. With fierce grit and teamwork, the Avengers extended their winning streak to 8 games after defeating the visiting East Lyme High School on Carcieri Field. 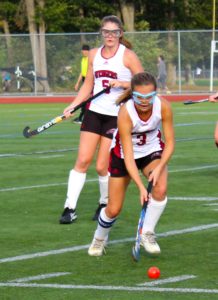 Anabel Stavrand and Julia Blessing defend their side of the field, deflecting the ball away from the goal post.

The first quarter began with the Avengers charging the opposing goalie at full force, finally breaking through at the 14:58 mark when Logan Shunney (#4) scored the first goal. Connecticut fired back just as strong, which made the rest of the first quarter a tight battle on the field. Although, Kyra Pavilonis (#8) fiercely defended the EG goal post whenever the ball passed by.

The second quarter was action packed. Seven minutes in, Sabrina Neimark (#9) made an amazing defensive stop by blocking what would have been a sure score from Connecticut. Moments later, Alex Mega (#10) scored an impressive goal, increasing the EG lead to 2-0. The EG defense in the latter half of the game crushed Connecticut’s chance of making a goal when Elisabeth Loiselle (#22) made the defensive stop of the night – with the ball hurling towards the EG net, Loiselle swiftly deflected it across the field. The Avengers would not be denied their third goal of the evening as Anabel Stavrand – a top player of the game – hustled down the field. Stavrand passed to Julia Blessing (#5), who made the final goal of the night.

With three minutes left in the game, Connecticut scored its one and only goal, bringing the final score to 3-1, with the Avengers on top. 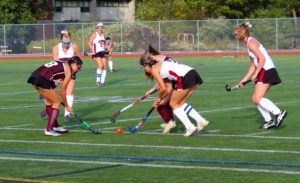 Elizabeth Amelotte and Alex Mega steal the ball away from East Lyme.