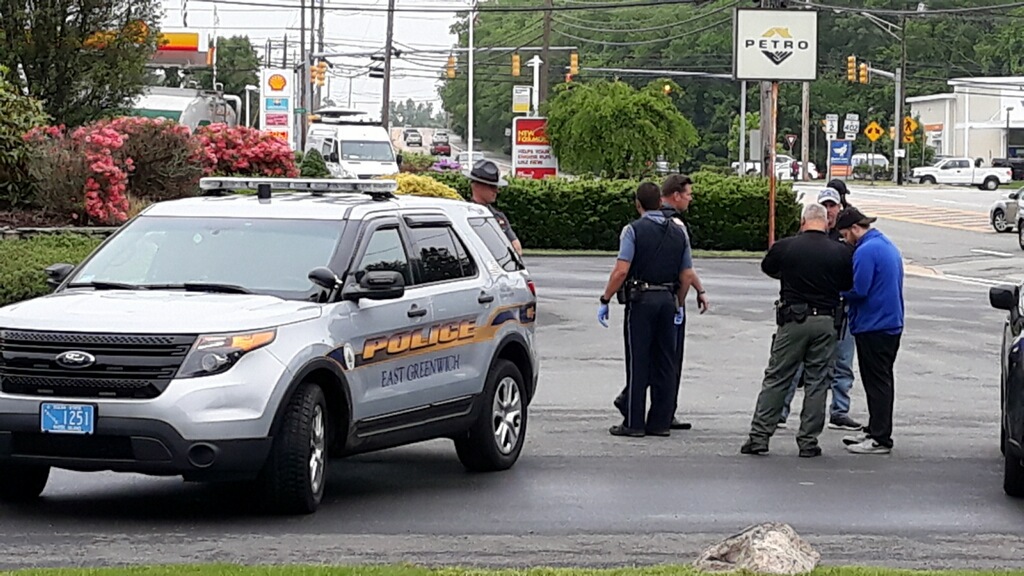 Above: The scene at the Dunkin’ Donuts after the second suspect was taken into custody there Thursday. Photo credit: Chuck Ranney

Cranston police charged Patricia Chivers, 33, of Warwick, with felony assault after she ran over the foot of a Cranston police officer during a traffic stop, fled the scene, and started a chase that wended through Scituate, Coventry and West Warwick before coming to an end on South County Trail at Frenchtown Road Thursday morning.

Police approached Chivers and her male passenger, 29, also of Warwick, around 7 a.m. Thursday as they sat in their car, which was parked in a field in the area of 500 Laten Knight Road in Cranston. The pair appeared to be unconscious, according to a report released Thursday evening by Cranston police.

After police made contact with Chivers and her passenger, Chivers drove off, running over the foot of one of the police officers. The other officer followed the silver Nissan sedan.

By the time the car reached Middle Road in East Greenwich (heading east), EGPD had been alerted. Officer Chris Rafferty, the student resource officer at EGHS, positioned his car at the intersection of Middle Road and South County Trail to prevent the suspects from continuing on Middle Road, according to EGPD. At this time of the morning, Middle Road would be full of students, parents and buses on their way to both EGHS and Cole Middle School.

Rafferty joined the chase south on South County Trail but it was soon called off due to the suspects’ increased speed and the traffic congestion in the area. Police caught up with the car after it had run into another car while trying to turn right onto Frenchtown Road.

They both will also be arraigned on charges from January of three counts of fraudulent use of a credit card over $100 at three businesses in Cranston. Chivers also was a bail violator on charges from April in Cranston and there was a warrant out for her arrest also from April on another charge. The passenger was in violation of his probation.

According to the Cranston report, the injured Cranston police officer was treated and returned to duty. The driver of the car struck at Frenchtown Road received minor injuries and was taken to Kent Hospital.