Felicia’s 2.0: New, Improved, But At Heart Very Much the Same 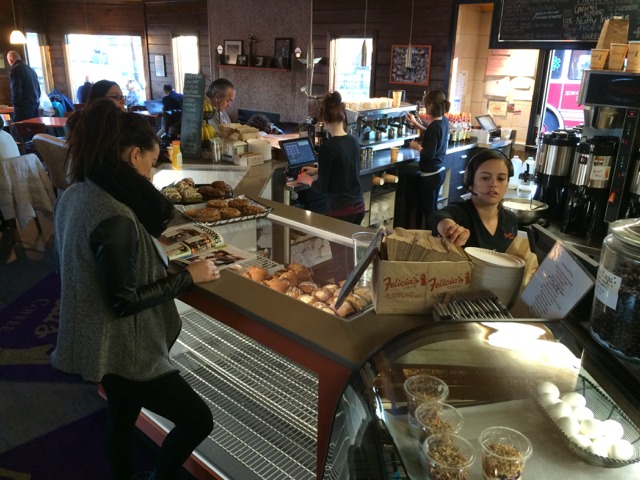 Don’t worry. Felicia’s is still Felicia’s – even after the most significant renovation in the shop’s 18 years. That was intentional.

“I didn’t want to change this,” said owner Felicia Revens, pointing to her heart.

Many of the changes can’t really be seen by customers – new electrical service, new coffee machines, a new cash register – but were a long time in coming, Revens said. Other things, such as new lighting and paint, are more noticeable. In addition, there are USB plugs in a couple places and you can now pay with a rewards card you put money on, with incentives going back on the card. Or even pay using your phone.

And it’s not done. New table tops, for instance, will be will be coming in to the dining room.

Remarkably, the majority of the renovation took place over a 36-hour period, starting last Sunday afternoon through Monday. The shop was closed Monday – that in itself a rarity, since Felicia’s is open every day of the year but Christmas.

Revens said it only looked like it was done fast. In reality, she’d been working hard on it behind the scenes for the past three months. The new display cases were built off site and electricians did a lot of work at night. On Monday, workers blitzed the place and, by Tuesday morning, the shop was back in business and customers were lined up at the (new) counter, ready to place an order.

Felicia Revens holds the new Felicia’s card. You can put money on the card, use it to pay and get rewards back on it. Or use your phone.

As for that je ne sais quoi that is Felicia’s so that closing for a day becomes a news story, Revens said it’s the whole experience of the place.

“I give customers absolutely the most I can – a beautiful place, great food and drinks, great service with a smile. Everybody’s comfortable and everybody’s welcome,” she said.

She said it helped that they offered a range of products, including several gluten-free and whole grain items in addition to the cakes and muffins, all made on premises.

As successful as Felicia’s it, Revens said she just hadn’t been tempted to branch out to other communities.

“The way I chose to run my place, I can do in one place what others net in three, because I’m here,” she said. “I keep my eye on everything. I like to know that when someone comes in, they’re happy when they leave. And if they want to see me, they can.”