Above: Discussion during the Community Master Plan workshop at Swift Community Center Oct. 27.

Consultants working on the Community Services Master Plan unveiled ideas for a number of town parks at a public session Thursday, Oct. 27, looking to those in attendance – and all residents – to kick the tires, so to speak, and offer feedback. Public comment is open through Nov. 17.

These plans are not set in stone, said the consultants. Rather, they are a continuation of a process that began in January, when residents and other users of town recreation spaces were invited to fill out a survey that included questions on everything from how often you used town parks and recreation facilities to what you would like to see added. Needless to say, people had a lot of ideas for what to add. A dog park was high on the “wants” list and so, in the plans unveiled last week, there is a dog park located behind the Parks & Rec building on Frenchtown Road. Another want was a pool – there is no pool in the plans.

The plans also call for an additional artificial turf field at the high school, on the land beside Route 4, across from Carcieri Field and the baseball diamonds. There’s additional parking in that area too, to relieve the bottleneck that happens on the drive there.

Again, to be clear, none of the plans outlined in the photos below are slated to happen. Rather, according to Community Services Director Andy Wade, these are “initial park concepts.” The idea now is to collect feedback – positive and negative – and use that to craft a final report, a roadmap for changes to town parks over the next 10 years, to be released probably in January 2023.

One item not quite on the table at present is Swift Community Center. There is a proposal afoot to expand the center (as can be seen on the diagram below) but consultants said Thursday it will be separate from this project.

Below are photos of the proposals presented Oct. 27. Find a report and survey results HERE and a link to the page about this project on the town’s website HERE.

***Find better images then our photographs below of the different plans here: A dog park behind the EG Parks & Rec building on Frenchtown Road. Proposed changes at the high school. The River Farm fitness area could be home to pickleball courts in this scenario. 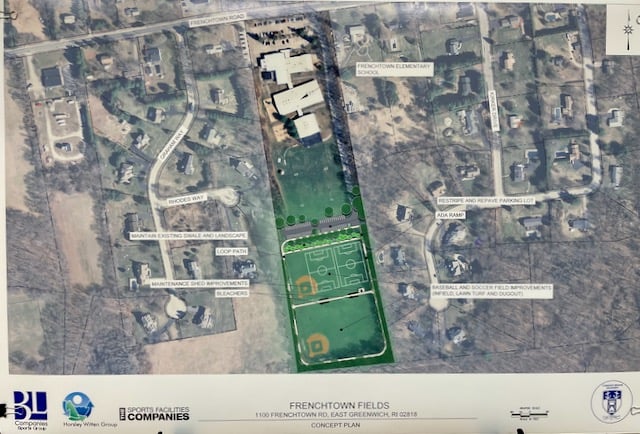 Improvements to the fields at Frenchtown Elementary – this would change depending on school construction plans. 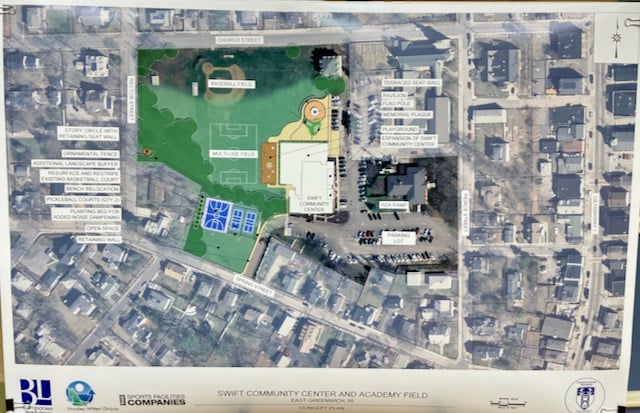 Under this plan, pickleball courts would be added near the tennis courts on Frenchtown Road.