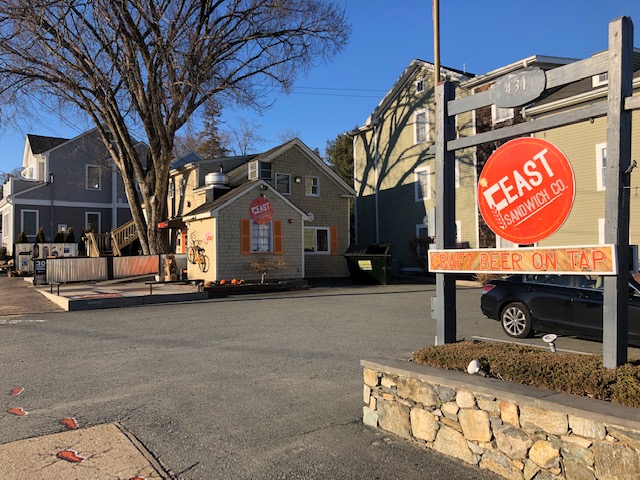 Feast Sandwich Co., the popular Main Street restaurant with a following that extends well beyond East Greenwich, won a 4-week reprieve Thursday in its quest to stay open as it deals with a delinquent state tax bill. This follows the Town Council’s decision Monday to give the restaurant until Feb. 4 to find a resolution. Feast is looking to renew its victualing and liquor license with the town.

Feast owners John Sepulveda and Mitchell Waterman learned they had a tax problem in late November, following some bookkeeping errors. The town requires restaurants receive a certificate of good standing from the state Division of Taxation for license renewal. Licenses in East Greenwich expire on November 30. As has become custom, at a meeting in late November, the Town Council granted an extension through December to restaurants, including Feast, that did not yet have clearance from the state.

Sepulveda said this week they had hoped to remedy the situation in December – or at least make a big dent in it – but construction closed down Union Street, their point of entry, for several days costing them dearly during a typically busy month. Still, the restaurant has been doing well. Sepulveda said he was confident it would only be a few months before they could get out from under the tax bill. They needed the time to do that.

They got a temporary restraining order – to keep the town from preventing them from serving alcohol – in mid-January. On Thursday, they got a four-week extension on that TRO, after Town Solicitor Andrew Teitz told the court the town did not object.

“I believe the Town Council’s policy is they want to try to help businesses where they can,” said Teitz. He said Feast’s “probability of success” helped too.

“I am happy about it,” said Sepulveda of the extension. “The plan right now is to … pay down as big a chunk as we can, stay in compliance while doing so and do everything possible to meet our requirements and move on past this.”

Sepulveda talked about how they had decided to open up in East Greenwich two years ago, after exploring Main Street when his daughter was taking martial arts classes nearby.

“I fell in love with East Greenwich,” he said. “I see us being here for a long time.”

Meanwhile, the Town Council also gave Kai Bar an extension on its alcohol and victualing license. The restaurant, at 232 Main Street, has been in the midst of transferring ownership. The original corporation was cleared by the state but ownership was transferred before the Town Council acted on the renewal, leaving Kai Bar in license limbo. The council Jan. 28 gave Kai Bar until later in February to work out the transfer with the state.

And the Town Council granted Frank & John’s a full liquor license Jan. 28. The Main Street mainstay has had a limited beer-and-wine license for many years. Owner Luz Chacon said Monday she wanted to be able to provide customers a larger array of options.

East Greenwich News, a not-for-profit corporation, relies on donations. Become a part of EG News today – click on the donate button below or mail a check to EG News, 18 Prospect St., E.G., RI 02818. Thanks!