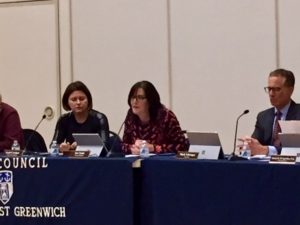 Town Council President Sue Cienki said Wednesday the Town Council would be “cooperating fully” with the investigation into Town Manager Gayle Corrigan’s role in the hiring her business associate Linda Dykeman as town finance director. This follows the decision Tuesday by the state Ethics Commission to investigate a complaint against Corrigan that argued her role in the hire violated state law.

“Per the Town Charter, the Town’s finance director is appointed by the Town Council, not the town manager. The Council hired Linda Dykeman because of her certifications, qualifications, and school and municipal finance experience. She was hired in an open, transparent process, and was also working for the EG School Department prior to becoming a Town employee. It was the Council’s decision to hire Ms. Dykeman, not Ms. Corrigan’s. The ethics complaint is in the preliminary stages and the process will unfold according to the Commission’s rules. We look forward to cooperating fully with the investigation.”

The Town Charter phrases the role of the town manager differently, stating the finance director “shall be appointed by the Town Manager with the approval of the Town Council.”

Vice President Sean Todd also had a slightly different take on the issue in his testimony during the Firefighters and James Perry versus the Town of East Greenwich trial in October in Superior Court.

In the trial transcript, lawyer for the firefighters and James Perry, Elizabeth Wiens, asked Todd about if Corrigan suggested Dykeman for the finance director position at a meeting June 26, after she told them she would be making staff changes. (According to the transcript, it’s not clear if the council voted on individual terminations and hires or if it just voted for the so-called “One Town” consolidation plan. No minutes were taken during that June 26 executive session.)

From the court transcript:

Wiens: And Ms. Corrigan, at that meeting, did she suggest that her partner — her business partner, Linda Dykeman, be appointed Finance Director?

Todd:  I believe we were consolidating finance and she was the recommendation for the role.

Wiens: Who recommended her?

Todd: The person that put the One Town plan together, Ms. Corrigan.

Wiens: She’s now the Town Manager. Linda Dykeman also worked for Providence Analytics. She is now the Finance Director. You didn’t see a problem with that?

Todd: I didn’t think there was anybody better to implement the plan than the people that put the plan together.

Wiens: Did you discuss putting the jobs out to bid?

Todd: Again, these are like issues that happened within the Town Hall that – we’re an advisory board. We are not making personnel decisions of individuals.

Wiens: Did you have a discussion about putting the matter out for bid?

Wiens: Or offering it to one of the laid off employees?

Todd: No. I don’t remember.

Wiens: Or posting it?

Todd: We may have; we may not have. I’m not recalling.

The Ethics Commission has 180 days to investigate the complaint.