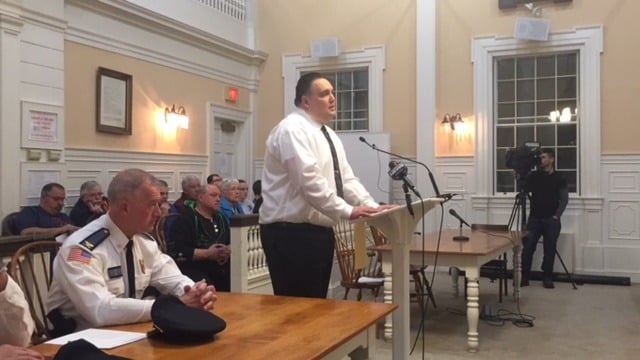 The Ethics Commission dismissed a complaint against EG Fire Capt. Bill Perry Tuesday, in a 7-0 vote. The complaint was brought by now Dep. Fire Chief Peter Henrikson. (Henrikson was not working for the town when he filed the complaint in March.*)

The commission also voted to extend by 60 days the investigation into a complaint against Town Manager Gayle Corrigan involving an omission on an ethics statement.

The commission had authorized a full investigation into the Bill Perry complaint in April. On Tuesday, the commission’s prosecutor and investigator presented their results. The commission then voted, finding no probable cause. Find the report here: Ethics Commission Perry Notice.

The complaint questioned the ethics of Perry’s working in the same platoon as his brother, James Perry, who was hired two years ago, since Bill Perry (as a then-lieutenant, he would be in a supervisory position over his brother). Before James Perry was hired in 2016, Bill Perry had sought an advisory opinion from the Ethics Commission. In that application, then-Fire Chief Russ McGillivray had said it would be unlikely the two brothers would end up on the same platoon. Dep. Fire Chief Peter Henrikson brought the ethics complaint in March, before he was hired back by the town in April.

Henrikson’s complaint also said Bill Perry was in a position to help his brother get overtime shifts. Overtime, however, is handled by a rotating list and not controlled by supervisors.

On Thursday, Bill Perry said he was “extremely happy” that the investigation is over and he was exonerated.

“The Ethics Commission does an incredible job,” he added. “They did a thorough investigation.”

One member of the Ethics Commission did advise Perry to submit a request for a new advisory opinion now that he has been elevated to the rank of captain. Perry said he would do that. In addition, the commission has asked the town to provide an alternate chain of command in the event Bill Perry could be in the position to serve as a supervising captain over James Perry.

“The Ethics Commission wants to see something in writing that I cannot be my brother’s supervisor,” he said. He has asked Chief Robinson to produce such a document.

The Ethics Commission’s vote to extend the Corrigan investigation follows their ruling earlier this month that there was probable cause Corrigan improperly hired and continues to supervise her business associate Linda Dykeman. That finding could result in a formal hearing if a settlement is not reached.

Of note, the law firm that had been representing Corrigan on these complaints – Whelan, Corrente – has withdrawn. She is now being represented by Christopher Gontarz at Lynch & Pine.

Whelan, Corrente is still representing the town on labor and other issues. Legal bills for June and July totalled $21,400, including $2,500 for “ethics” work (Whelan, Corrente withdrew after July) and $18,230 for “labor” work (Whelan Corrente Flanders Kinder Siket invoices June, July 2018).

The town has been paying for Corrigan’s legal representation in the ethics complaints. Whelan, Corrente has billed the town $65,000 through July for ethics work. Cienki said Monday she was not sure if all of that was for the Corrigan ethics complaints. She has not responded to more recent questions about the town’s relationship, if any, with Lynch & Pine.

* Henrikson had been the EGFD fire chief from 2009 to 2013, when he retired following a 35-1 no confidence vote from firefighters.